Please feel free to count the number of urban yuppie/hipster cliches in this tale of utility cycling. 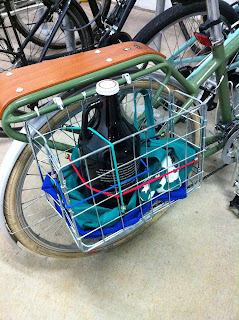 So, I read on twitter than my local Whole Foods was now selling growlers of fancy-ish and/or local beer. I decided to get on my bike and see if it was possible to transport a growler home successfully- I tried the other night and now I have a scarf and bag that smell a little too much like Eggenberg Pils for my liking.  This time I was determined to avoid spills, or at least mitigate the negative externalities of spilled beer, namely smelling like a sort of foppish frat house. I decided to forego the pannier approach, which I think ultimately failed because I couldn't keep the growler upright, and instead opt for the basket+bungee chord method. To be frank, I would say that I both lack the ability to solve problems pragmatically and a true dearth of mechanical vision. Ergo, figuring out the best way to loop the bungees was a challenge. I decided to go with this approach on my way there ------------------------------------------->
That's three bungees- one of which I put through the jug handle because that seemed like a sorta good idea in the way of stabilizing the beer. I rested the beer on some Peace Corps reusable grocery bags. This picture was taken with my iPhone. (If you've been counting cliches, I think we're now in the double digits). 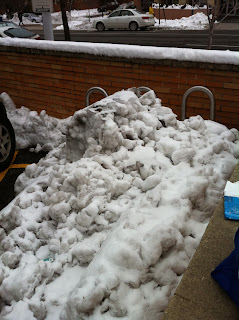 Anyway, the ride there was pretty uneventful. Not too many cars on the road, pretty much no one else on a bike. When I got to Whole Foods, I was again reminded of bicyclists status as second-class citizens as evidenced through the carefully cleared bike parking facilities. I forewent parking atop the Matterhorn and elected to instead lock my bike up directly in front of the store. After I finished shopping for the other items on my list (slivered almonds- I got sliced instead-, goat cheese and chocolate cake. The first two items are for brown rice cakes and the cake is to bring to a going away party for colleagues moving to Nigeria for work), I went my refill my growler. I chose the Flying Dog Garde Dog, which according to their website is a "traditional French Biere de Garde or "beer for keeping." It took a while for the beerkeep (my name for his job, not his own presumably) to fill the growler on account of what appeared to me to beer excessive foam. I don't know whether the foam was a result of the newness of the tap or his poor pouring, but it took about 5 minutes to fill the growler the full 64 oz. I used this time to marvel at the multitude of cheeses in front of me.
Beer filled, it was time for checkout, which at Whole Foods is like some sort of weird Thorstein Veblen-inspired anthropological observation. While I won't bore you with the descriptions of my fellow linemates, though the older women with the faded jeans, East European red hair and cart full of cheeseplates and cupcakes was almost as interesting as rich soccer dad with cashmere scarf who looked like DB Cooper, I used my infuriatingly long wait to observe what Whole Foods tries to hawk to you as you check out. Here are some pictures: 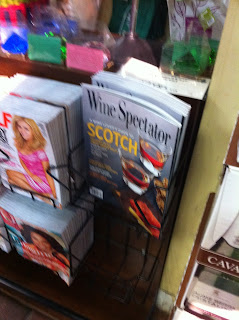 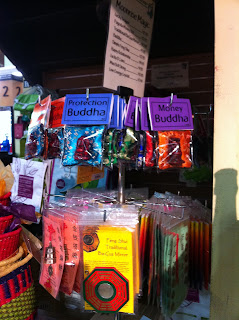 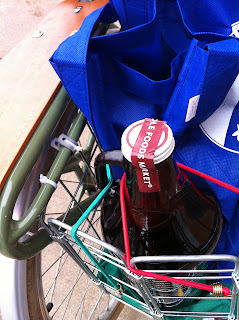 Contradictions both! I love wine, but what scotch should I buy? I love recognizing desire is the path to all evil, but I'd sure like some money! I never knew Whole Foods was in the business of purveying existential angst  along with organic produce and frozen vegan buritos.Anyway, back to the bike I went with my bags and beer. I only used two bungees this time, both of which went through the jug handle and managed to stay affixed to the wire basket during the entire slushy, bumpy ride home. This strategy seemed to work since no beer was spilled and the rest of my groceries (all four things) managed to make it home without incident. In conclusion, it's both possible and quite easy to transport a growler of beer by bike, though it is also easy to transport cans or bottles, but then you wouldn't have the same smug sense of smug satisfaction that you get from reusing a big glass jug instead of vessels that you would just put in your recycling upon finishing. It wasn't harrowing, but I suppose that's the point. I got to ride my bike a little, avoid a hazardous and stressful parking lot full of BMWs and Lexus SUVs vying for limited spaces and have a sample of beer all before noon on a Saturday. And then I blogged about it on my Macbook.
PS- Final cliche count- 547.