I managed to replace my tube without incident (it was actually really fast and relatively easy) and I was able to ride my own bike home. I'm not totally sure what caused the flat. There was a really small puncture along the seam where the valve piece is melded to the rest of the tube. Some have suggested an issue with the rim strip, others say witchcraft. There didn't appear to be any amiss with the tire or the rim and I made it home without incident.
I have two metal folding baskets on my bike and the thing about folding baskets is that you're supposed to be able to clasp them closed. Not so much with these. I know that Wald is a great company, but it's always disappointing when I'm riding along and one of the baskets pops up and either starts clanging or gets in the way of my heel while I'm pedaling. Minor inconvenience, but something of an annoyance. I stopped twice to try to close the basket (the unused right one) and eventually gave up and fully opened it. But since it was empty, the bottom piece kept bouncing around. #firstworldbikecomplaints
The other bakset held my work clothes (unbagged because I'm hobo like that), with my frame pump wedged somewhere between my jeans and shirt, all topped by a u-lock. I was paranoid about the fram pump coming lose and falling out of the basket. I didn't have the vision or aptitude to figure a better way to store it than shoving it between clothes. I looked over my shoulder a couple of times to make sure it didn't dislodge, but stopped doing this after a close encounter with the curb.
Cars don't stop at Tunlaw/New Mexico and 42nd. I saw three cars pass through with varying levels of slowing as I pulled aside to try to fix my basket. I'm thinking about filming it some day, but this kind of thing has been done. But it might be instructive for those in the neighborhood to be disabused of the notion that bicyclists are unique in their attitude towards traffic laws. And I also bought one of those Flip cameras last Christmas and I barely ever use it any more.
Man, this bike is heavier than the other one..
34th street on one side of Prospect isn't aligned with 34th street on the other side of Prospect. That means that as motorists approach the stop sign, they shift over to the right, aligning their cars with the road on the other side of the intersection. In conclusion, be very careful when you're biking along because many drivers aren't expecting a cyclist to be passing in the three feet between them and the parked cars and think nothing of reducing that three feet to one foot as they move towards the intersection. There's not much to do to fix the problem, aside from striping a bike lane and hoping drivers don't cross the white line, which they will invariably do since the roadway continues askance. Other option is to move the buildings. You know which one I support.
On the Custis, I tried to keep up with a guy with a shaved head wearing a crop-top, but it was to no avail. He had an over-stuffed messenger bag and was wearing more than one bracelet. Cycle chic? It was during my futile pursuit that the pump finally dislodged itself and I had to slow down to kick it back into place. I traded the trail for the street at Veitch because my bike is much more of a street bike than a trail bike and secondarily because I was tired of riding on the trail.
Arlington really needs to hurry up on redoing the Clarendon plaza. I don't think it's great design, but anything will be a vast improvement.
And then this happened:
It's not that the driver blocked the lane. It's that he blocked the lane but could have parked 6 feet closer to the curb. I guess he didn't want to be blocked in by cars, but I doubt that the cars would have parked in the no parking zone where the truck rested.
I finally replaced my cleats. These cleats needed replacing months ago. I think it's time for a new pedal system since this one isn't conducive to daily commuting. 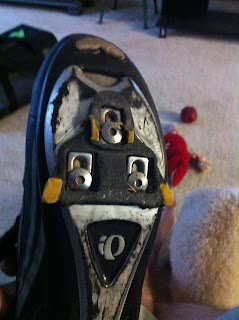 It's hard to tell in this picture where the beige carpet starts and the beige dog starts.