Those of you who don't follow me on the twitter might have missed my desperate plea that you read this post as soon as you can. Written by a Jay Ulfelder, a political scientist and cyclist, the post covers a number of facets of 'sharing the road' through the a social science lens. For those you who don't click through links for whatever reason, here's a longish excerpt that I especially liked:


1. Rule of law doesn’t mean that laws rule. Social scientists who study political and economic development talk a lot about the importance of “rule of law,” which boils down to the idea that sensible laws are predictably and fairly enforced. According to many development theorists, rich democracies like the United States have prospered in large part because they transitioned early from arbitrary and capricious regulations to rule of law. Poorer countries will only see their economic growth rates take off and politics stabilize, the thinking goes, when they manage to make the same shift.
Even in the United States, though, rule of law can be startlingly incomplete. When you’re perched on a 17-lb. carbon-fiber sculpture, trying to share the road with streams of 3,500-lb. hurtling steel boxes, you’re constantly reminded that the formal rules only tell a small part of the story. Most drivers exceed the formal speed limit most of the time. Almost no one comes to a complete stop at stop signs, even though that’s what the rules of the road tell you to do. (Cyclists are probably worse about this one than drivers, by the way, often blowing through stop signs where cars are already waiting.) A lot of people in Maryland, where I live, talk on hand-held mobile phones while they drive, despite the fact that the state passed a law last year banning that behavior. Some drivers expect cyclists to clear the road for them, even though the law in most (all?) states instructs cyclists to take the lane when the rider judges that it’s not safe to squeeze onto the shoulder. Significantly, this gap between formal and informal rules doesn’t just happen when the police aren’t around. On numerous occasions, I’ve had police officers tell me to do something not prescribed by law (e.g., avoid this road, stay on that bike path), apparently because they thought it was expedient.
If you tried to survive in this environment by counting on people to follow the formal rules, you’d be toast. Some of this is just ignorance of the law, but some of it–like speeding–is the result of informal practices that dominate the formal rules. Some of those informal practices might be more efficient than their formal counterparts, but surely some are not. So, even in places where “rule of law” supposedly prevails, many of our daily practices are still built around shared expectations based on unwritten and sometimes inefficient rules, and these unwritten rules can be very hard to dislodge when they are widely followed.
These observations have strongly influenced how I think about prescriptions for better governance in “developing” countries that are based on changes to formal rules. Some political scientists and economists place great faith in the idea that desirable social outcomes can be brought about by crafting rules that will give people incentives to behave in the ways we’d like. On paper, that idea makes some sense. In practice, however, this yawning gap between formal and informal institutions on the roads reminds me that real life is a lot more complicated.

I tend to think that there's much more room in the velosphere for over-intellectualizing topics related to bicycling and advancing our topics of discussion beyond "more bike lanes" and "Idaho stop (not that those things aren't important). Of course, this blog does nothing of that sort and instead retrenches anything beyond my own highly subjective and hyper-local and skewed bicycling experience, substituting attempts at humor for actual substance. But you get what you pay for.
I guess it's supposed to be 100 today. This morning it seemed warm, but pleasant, though I expect this afternoon to be unrelentingly terrible. Some advice for beating the heat: don't ride a bicycle. You could also drink lots of water, not over-exert yourself, wear light colors, stick to shady (tree shady, not sketchy shady) routes, mount an air conditioner to your handlebars, replace your saddle with a Brooks B17-I (which is the exact shape of your standard B17, but sculpted in ice), take the Metro, stay at your office until October, only ride downhill, zip home on WABA-approved hoverbike, or ask Tommy Wells for a ride on a tandem (since this is the only way he'll be able to remain involved in bike issues).
How many members of the Squadra Coppi are there? Do they just give out the jersey to anyone who walks into Conte's? Ok, answered my own question. Well, whoever you were behind me on Fairfax, hello.
Police on Custis. Again. She might have deputized those sewer guys, too. 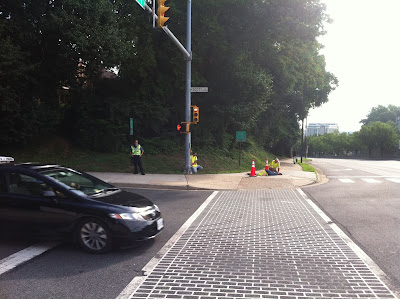 This picture was taken as I stopped and waited patiently at the red light. When the light turned, I said "Morning!" and I got a gruff response. She might not have been happy that I took a picture, fearing that it would end up on the internet and all the local bike types might find out about it and have some sort of reaction. Joke's on her- nobody even reads this blog. By all accounts, the ACPD are well-informed enforcers of traffic laws and have been treating cyclists with prudence and equanimity. Of course, knowing this didn't stop me from alerting other cyclists I saw down about the police presence. I mean, if the goal is to inform cyclists that they need to better heed the bike lights, the police and I were doing the same thing. As with all my interactions with cyclists, I had mixed results. To the first I passed, I mumbled "policeatthelight" in a way that probably wasn't intelligible. So, I overcompensated and to the next group of two, I said "Officer at the corner." As we all know, Officer at the Corner was a the Gere/Winger sequel that never quite got made. What a stupid thing to say! So, on my final attempt, I went with the declarative "There's a cop at the next bike light," which was both factually accurate and easily understandable. I wonder how many days this will continue.
I have issues with the construction worker who wields the stop/slow sign and refused to give me the "slow" side even though there were no cars coming or anything else going on that continued to mandate it. That's why I rode past him on the sidewalk. If you want me to behave like a driver, treat me like one. Unless, of course, you wanted me to ride on the sidewalk because in that case, mission accomplished. But I've got a right to the roadway and I hope you know that.
Can we please update the Neighborhood Watch signs? I'm pretty sure Jack the Ripper has been dead for some time now. I want my neighbors to be on the look out for more than just guys wearing fedoras, masks and capes. Especially, when the alternative Neighborhood Watch logo is a cool alien eyeball (page 7). Or maybe we could just stick with text-only signs, though that does force the burden of literacy on our local lurkers.
Someone should start a tumblr for pictures of the people standing outside the Russian embassy on morning's when there's consular business. Quite a crowd.