I saw a woman today who rode no fewer than three toddlers to the intersection of 4th and Thomas using a combination of a bike child seat and a trailer. Good for her. It was entirely ambiguous why they had stopped there since there wasn't much for the kids to do other than play in the dirt and watch some other older kids wait for a bus to summer school. I wanted to take a picture, but, in general, I don't think parents like strangers taking photos of their children so it can be put on the internet. Even more so, if the pics are going up on a bike blog.
That's why I got this guy's photo, all secret-like: 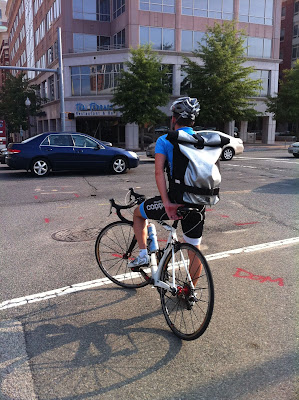 This member of the Squadra Coppi checked all the boxes for superbiker (lycra team outfit, high end and impracticable road bike with expensive components, preponderance of body weight carried in the calves) but ruined it by actually carrying a backpack! That probably means he was commuting and that totally ruins his superbiker credibility. He might even be carrying a lock with him! What is this world coming to? Let's hope his backpack was just full of Men's Health magazines and chamois butter and that it's all just one big misunderstanding. If he's riding his bike for a practical purpose, like transportation, well, word might get out and his reputation would be ruined.
I'll forgive the first four drivers for making a turn after the light changes, but the fifth one is history's greatest monster. Have you no decency?
Got stuck behind a guy (one of those guys who rides to work in mesh basketball shorts) who was having a rather difficult time figuring out how to handle the bus driving in front of us. Spoiler alert: bus stops tend to be on the right side of the street. That means that when the bus stops, it'll be moving to the right and you'll be able to ride around the bus on the left. Or, you could wait behind the stopped bus and it goes again. These are pretty much the only two good options. There's no mystery here. It's pretty easy to anticipate it.
Those fake lofts sure are going up fast. But the renderings are horrible! I assume that one of the primary advantages (and the reason it costs to such) of buying one of these condos is the proximity to the relatively dense and sorta urban R-B corridor and the pictures do nothing but show grassy fields and plenty of cars. If you wanted grassy fields, you should have left it as it was:

It's been almost 11 years since I first set foot on the Hilltop (most pretentious way ever of referring to this place) and it's amazing to me that the "uniform" of a blue oxford and khakis hasn't changed at all. It's like a Potemkin Village run by J Crew where time is frozen like catalog copy. There must be some sort of training camp is central Jersey where the recruits are gathered, trained and issued their uniforms prior to being deployed. And instead of "jump wings," you get a whale belt. Ridiculous.
Rode past a guy and his kid riding a Bike Friday tandem, with the kid at stoker. Kid didn't look happy. They had a rear rack and two, mostly filled Ortlieb panniers. I don't know where they were headed, but I told the guy that I liked his "set-up" (whatever the hell that means) and he said "Yeah" (whatever the hell that means). I didn't say that the kid wasn't pedaling both because he was and because it's not clever and makes you out to be a jerk.
Use turn signals and make a bicyclist's day. Drivers want us to ride on the right, until of course, they want to make a right turn at which point we're in their way. This is why I approach stop lights where turning right is quite common by taking the lane. However, if I continued to ride along on the ride sight, it would really be helpful if you signaled your intention to turn so that I could know either to hurry up or slow down.