No sunglasses, even though it was a little sunny. I thought a little about stopping to put them on, but, really, who wants to stop on a Friday when it's 5 and time to get the hell out of work after a long week? Not me.
First time in a while that I felt really free on the bike, not consumed with things around me, not worried about jerk drivers and not worried of slipping on slick pavement. There's not much better than that feeling, though admittedly, it's difficult and not exactly wise, to engage in this kind of carefree convivial-embrace-the-world-around-me-kumbaya-itude because one must bike defensively and that's pretty much the way it is.
Bicyclist in scrubs riding up from GU hospital. I got a kick out of that for some reason. Maybe because I have really positive associations with the show Scrubs and can't quite reconcile the fact that not all hospitals are hilarious. Truth be told, my one emergency room experience, itself the result of a bike crash, was so absurdly hilarious that I couldn't help but have a shit-eating grin on my face the whole time. When asked by the nurse attendant if I had been drinking, I replied "well, it's 9 in the morning." That only prompted her re-asking the question. In any case, hospitals really aren't funny places and I'm grateful that I haven't had to spend more time in them.
Jerk drivers can be jerks. For example, I know that the woman driving that SUV deliberately and dramatically slammed on her brakes extra-hard at each stop sign when I was behind her to prove some kind of weird point about my following her. I suspect this because once I dropped a block behind, she had no problem rolling right on through, like any other normal driver would. I'll freely admit to being paranoid. Doesn't mean I'm not right though.
Landrovers. They have significant mass. If you want a car with significant mass, get a Landrover. That's pretty much all I have to say about that kind of car. Other cars I have something to say about:


Sometimes I have to park my big white van on the sidewalk. Sort of like this guy did: 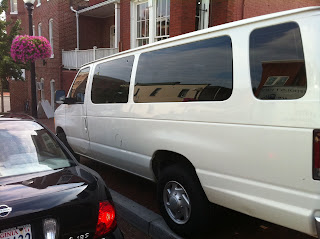 Parking it in the street would have inconvenienced people.
Behind four people, thee of whom were men and three of whom were on racing bikes on the Custis from Nash onward. One guy- a dope- stopped at the bike light only to then go, even as drivers were trying to make turns, both left and right. Riding into the middle of the street against the light while people are, rightly, trying to drive by is nothing short of a, technically speaking, dickish move. Just don't do this. You're needlessly antagonizing people. Do the normal bike thing and run the light when there's no one around.
Ever been eye to eye with a Castelli scorpion? Scary. Just like The Pearl. Any bike companies have either toads or rabbits as logos? Anyway, guy had some fancy carbon BMC jobber and he rode behind another guy with some Specialized whatever and neither of these bikes seemed especially pertinent for the commuting task at hand. Racks and fenders, people!
Rode along the Custis and down Lee Highway and over Kirkwood and once again realized that I'm wholly unsuited to riding on flat, empty roads. Boring. Especially when I'm by myself. Maybe I need get lapped to do some laps at Hains Point.
There's a weird logical fallacy about drivers and bikes that goes something like this:
Cars are faster than bikes (at maximum speed)
Sometimes cars have to go slow on account of traffic.
Sometimes when that happens, bikes are around.
Ergo, bikes are causing the traffic and making the cars go slow.
I see (hear?)this kind of thing every time I get honked at for not going fast enough through an intersection, even though the driver behind me can't see the reason (namely, the cars in front of me) that are causing my delay. It's just assumed that because I'm on a bike, I'm the one who's making things slow.
Obviously, this isn't the case, but I think that this is a sort of "assumed" truth of the road and I really wish this kind of thinking could be eradicated. Maybe through dermabrasion?