I don't think I'm riding in tomorrow (carpooling obligations, maybe), so just a heads up. Frankly, I didn't feel much like riding home this afternoon. It was a long and busy day and come five o'clock, I hardly felt up to changing into what were probably still damp bike clothes only to have to change/patch a tube and boot a tire (with my last dollar!) because, with my luck today, that probably wasn't going to work anyway. So, luckily, since I live in a place where the city leaders had the forethought/myopia to give the people a bikeshare system, which would allow me to get home (or kind of close-ish) via bicycle and not have to take a bus or train and catch germs from the hoi polloi. (Instead, I can inhale the exhaust from the hoi polloi's cars!) And likewise, I had the presence of mind/myopia to sign up for said bikeshare system and I have a neat little bikeshare key (in black, even, because I was one of the first 2k members) that grants me access to these bicycles.
When I got to the station, there were already two young ladies there with undocked bikes and 4 more bikes sitting in docks. Per usual, I loaded my bag first and adjusted the seat before undocking (clock is ticking once you undock). The girls set off, somewhere down Massachusetts, riding down the sidewalk. I put my key in the slot and nothing happened. This isn't what I expected, since normally the key unlocks the bike, changing the light on the station from yellow to green. I thought that maybe the slot was jammed, since the key seemed to kind of rub against the side in a way that it normally doesn't. Although, I can't say for sure since I've never really paid too much attention to the mechanics by which my key unlocks the bike, instead focusing on liberating the bike once the light tells me it's ok. Curious. Two young guys walked up the station and were looking on the side for the "pricing structure." They walked away without renting the bike. Another guy approached the station and undocked one of the bikes, making sure to roll up his pant legs prior. Um, do you know why people roll up their paint legs? These bikes have chain guards. It's wholly unnecessary. But whatever. I tried the other two bikes in the station with my key and nothing happened. WTF, CaBi?
I called the number and, as always, was greeted by a pleasant-sounding French Canadian bloke. He asked for my key number and I couldn't provide it because it has long since rubbed off the key. He then asked for my name and looked me up in the system. My membership was ok, so it wasn't that. Apparently, my key had been "demagnetized." So along with my broken Faberge eggs and damaged Gutenberg Bibles (insurance claim still pending), my bikeshare key was a casualty of yesterday's earthquake. Who knew?
He said he would send me a new key. I asked, I think, "so, what should I do until then?" It's amazing how quickly one adjusts to a world in which there is a bikeshare and can't really imagine the city without it, even if you're just a very casual and infrequent user like me. It hasn't even been a year. He said that I could use credit card and they'd reimburse me when the new key comes. We'll see.
So I set off, down Mass and up Mass a little. I passed the girls on CaBis and Mass and Cathedral and I quickly rode up behind some old dude on an expensive-looking racing bike with a cursivey W name that I couldn't really read. Down Wisconsin, which was bumpy and crowded and driven on by at least one total db in some kind of Audi supercar. I plodded down to 34th and then down 34th, mingling in with traffic on the parts that were too narrow to pass. The parking has been temporarily displaced on a couple of blocks where the bike lane has yet to be painted. I'm sure it's related to the streetcar track removal, but maybe I'll be surprised and they'll stripe the lane some more. I can dream, can't I?
Nice days mean open car windows and amongst other things, I heard some Kanye, some The Who, and some J Lo. Ambient radio noise is a side benefit of bike commuting. Overhearing the conversations of pedestrians is not one. Especially if one of them is holding a Georgetown Cupcake bag. No, I don't think you should "just run for it" across the street. Yes, it is "the busiest time of the rush hour."
I planned to dock on Lynn and walk to the bus. This worked. However, this was annoying: 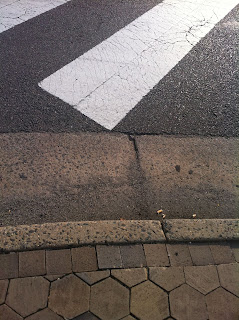 There's no ramp to cross Lee Highway, so when I cross Fort Myer, I inadvertently rode myself into a crummy position to cross the street. Fix this?
Did you know Arlington has a protected two-way cycle track? 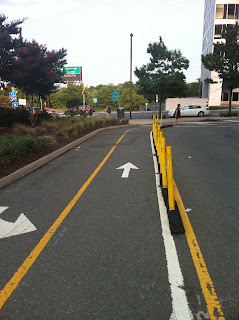 Sure it's only 30 feet, but eat it, DC! (I'm trying to display as much Arlington pride as I can muster prior to moving). This 'cycletrack' mostly helps CaBi users trying to get to Lynn.
Bus was there when I got there, so it was a pretty convenient ride home. I stopped at Glebe and picked up some beer at CVS (In Virginia, CVS carries beer, so another point for Arlington pride). I'm looking forward to being able to bikeshare from door to door (one of the new stations will be about a block and a half from our new place) and not have to take the bus, but I guess I'm looking forward even more to having tires that don't pick up flats so easily.