Prior to leaving work, I asked for some assistance in figuring the best route from my office to the stadium. One would think that when it comes to knowing the best route from my office to anywhere, that I'd be my own best resource and not have to rely on the knowledge and pity of others to direct me. Nonetheless, I did receive some helpful hints concerning travel in the south and east direction and I basically followed N.'s proposed route. Or at least with some modification. It's a straight shot down Mass to Q, one in which I pretty much take the lane and zoom along with car traffic. Taking the lane, for me, somehow manages to be both banal and terrifying. Along Mass, I saw the associate registrar who shouted "congratulations" at me after I goofily waved at him (I got a new job that's also a better job, but still at the university) and I shouted back "thank you" once it registered that he was yelling at me. I cut across some traffic and raced on oncoming taxi to get to Q. Q has a bike lane, but it also has at this time of day a number of cars evacuating and pulling into parking spots with little heed for any occupants of the bike lane. Also, a lot of opportunities for right hooks. Q took me to Rhode Island, where I sort of got mixed up about the best way to turn left and might have come across like a jackass biker with complete disregard for the law. And while that's mostly an accurate description, I was really just trying to get out of the way and in the best position to continue on Q to 7th. On 7th, I was passed (while stopped at a red) by a hipster on a fixie. Yawn. Can hipsters move on to another mode of transport (single spring pogo sticks?) and leaves bikes for the rest of us. On 7th, I started improvising because I forgot to move over to 6th per my instructions. 7th isn't really fun, though there were plenty of other bicyclists taking it. I lurched through by alternately riding in the parking lane and squeezing past stopped cars. I was behind another rider, one who looked much more familiar with the area and considerably more adroit and the dodging and weaving game. She was quite good at it and even knew how to best get into the Penn Ave bike lanes, whereas I managed to find myself a) riding on the sidewalk (CRIMINALLY!) for 20 feet b) stuck waiting for a walk signal to get into the center of Penn behind a gaggle of tourists and c) riding too far into the intersection of Penn and 7th and almost the path of a turning Metrobus. Sorry, everyone. Penn was easy enough thereafter and 4th is basically pleasant until you cross Independence, though whatever the posted speed limit is through the Mall, unless it's 50 mph, is blatantly disregarded. I rode past a parking enforcement officer on a Segway (why not just give him a bicycle?) and into the cluster of brutalist nothingness that is LBJistan. I don't know what the plan is exactly for revitalizing this area (arson? having Paul Ryan sell it to pay down the debt?), but between the raised railroad tracks and the raised highway bed, it's rather unpleasant. Then I screwed up on my directions again and instead of taking I, I rode down to M, SW. M was fine until I got near the intersection of South Capitol and sort of freaked out because I didn't know what the intersection with South Capitol was like and I turned down Carrollsburg and salmoned on N. And then I waited 3 (!) light cycles before I was given the opportunity to cross. This is insane, especially given that there's a huge baseball stadium and people might want to walk or bike to it.
All in all, it was a pretty good route and I made fairly good time. I'm going to doing a lot of northwest-southeast biking through town once we move, so this was a good primer.
Bike valet. It's great.
I was at the baseball game thanks to the generosity of my friend J and his generosity was courtesy of IAVA. Thanks IAVA!
After the game (or more accurately, some time in the bottom of the 7th), we left and while I've ridden home from the ballpark before, I'm always unsure of the best way to go. Part of this has to do with the limited lighting I have on the front of my bike, which while sufficient for making myself visible, isn't the best for showing the path in front of me and this rules out most area trails, which are thoroughly unlit because that's how George Washington intended it or something. So, I rode M, SW until it became Maine, SW and then rode Maine as fast as I could because it was empty and the rode was flat and open. And then I rode through the tunnels underneath the highway and that was kind of cool, all the time thinking, wait, am I going to end up on the highway and wondering if I should bail to the sidewalk (which given the urban renewal-ness of the area would probably also put me on the highway) and then I turned left onto some kind of mystery street. 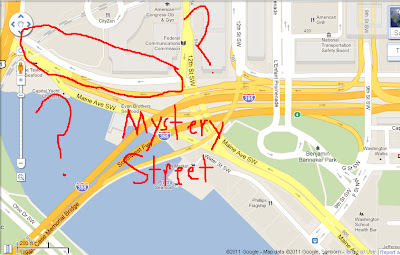 The mystery street (on ramp? Maine Avenue extension?) took me again under the highway (more properly the 14 street bridge) and then I was like, whoa, I need to turn here like now because I sort of new again where I was. And I did turn, sharlpy, onto a smallish pedestrian refuge area, beating the rush of an oncoming car by a couple of seconds, so that was good. And since I didn't have light enough to take the MVT, I eschewed the 14th street bridge for a Monuments at Night-style ride down Ohio Drive. If you haven't done this, you really should. There's something about biking in the dark that I really enjoy. I think it's because you feel like you're going faster than you actually are and accordingly you get this sense of tremendous satisfaction knowing that it's you yourself that's propelling you along to fast. And at the same time, you can completely detach yourself from the act of pedaling and just look at the hunks of marble lit in the medium distance.
Memorial Bridge to almost the cemetery to missing to bike path to doubling back to the bike path to riding down the dark, dark windy bike path to past the security guard/police officer/MP/marine in front of Iwo Jima who might or not have shone his large security light up the hill so as to provide me a little bit more light. A rather close pass by a car near the entrance to Fort Myer and then it was a straight shot down into Rosslyn and then a longer, slower plod up the hill through Wilson. Past the Clarendunces (there were fewer, but it was Tuesday), and down Fairfax and home. All the while, I was doing an outloud running commentary which mostly consisted of me saying things like "stop' and "too fast and too close" and "come on" and "just park" and "get out of the bike lane." The dark makes excellent cover for the snide.
And then I rode to work this morning.
A saw a Bikeshare rebalancing truck near Court House. I wonder if he was scouting for the new location, since there's no station there. Woo hoo, if so.
Muslims for Life would like you to give blood in honor of the 9/11 victims and they have bus ads to tell you as much. I haven't given blood since I attempted in high school when a nurse botched it and hit a nerve instead of a vein. It's probably something that I should be doing. And with transfusions of my super, biker (not superbiker) blood, we'll be able to defeat Smugness Deficiency Syndrome once and for all.
Always with the honking at each other. People can be so rude.Unjustifiable honking should be the subject of a Law and Order episode.
A rare "four bicyclists all get to a four way intersection at the same time" occurrence. Not one of us stopped and we managed to get by just fine. It's an anti-Nader. Also, a not uncommon "checking out babes while I roll my car through a stop sign not paying attention to anything else around me" move. I don't think the babes were interested in your leering.
For the second day in a row, I've had a taxicab driver cut me off when I'm making my left turn from 37th to Tunlaw. Not cool. And yes, it did look like I was going to ride my bike into your car on purpose to, I don't know, win some sort of stupid moral victory and accrue hospital bills to prove a dumb point. Don't do stupid stuff.
Two bicyclists in the course of my New Mexico climb. Passed the first, couldn't get to the second. I think there'd be more if there were bike lanes. Maybe by the fall.