Some suggested reading to get you in the mood. The mood for what, I don't know.

"Ain't no bike lane on this street."

Both pieces are highly recommended.
Here's some thematically similar pictures from this morning:

On the left is the blocked travel lane on Fairfax. This is a good bike cut-through, though it's also used by a lot of drivers looking to park by Northside Social. There weren't cones or a sign or anything. I was able to ride by on the inside of the truck, but I don't know what a driver was supposed to do. I get that work needs to be done, but maybe signalling ahead of time that the road is closed is a good idea...?
On the right is the block bike lane on Clarendon Boulevard. The lane is blocked roughly from Pierce to Oak. Bike Arlington is investigating how long the lane will be blocked. I guess it's the result of the construction site collapse. So just be careful coming down the hill and make sure that you signal (I use my hand, but any appendage will do) that you'll be riding in the travel lane.
Either Diego Forlan was riding his bike in Arlington or some guy was just wearing a Forlan jersey. Soccer jerseys are very popular bike tops, I've found. The guy might have actually been Ken, but I don't know for sure. He was on an old bike, maybe something English and had in a tow a kid trailer.
As of now, DC law prohibits advertisements on Capital Bikeshare stations and bikes. In London, Barclay's paid around $40 million for the Boris Bikes, but they had some input on color schemes and whatnot. Since the CaBi colors are pretty iconic already, I can only think of  two appropriately colored sponsors for the DC system (if the law is changed):

Personally, I think Wells Fargo would be a better bet (especially since they're new to the area and more likely looking to expand their visible presence and, furthermore, already associated with rugged, all-weather transportation). Just throwing it out there. I wouldn't mind, however, if the bikes smelled like french fries. Lady with the wavy silver hair I always see in the bridge, what's your deal? How far do you walk each morning? Do you think bicycling would be a good option? Or maybe you're just committed to walking, which I respect very much.
Glover Park has some nice bicycles that unfortunately have to live outside.

This really isn't good. I don't think that these are abandoned (at least not the blue one) and they really deserve some indoor storage.
It also has some residents (at least one) who are pithy as all get out. 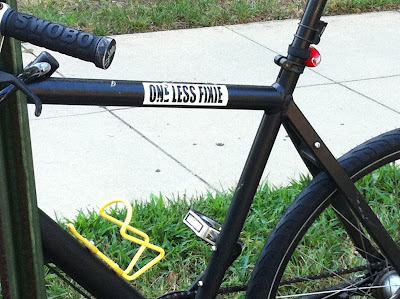