I don't prefer to blog this way, but allegedly, sometimes work involves lunch meetings and that's my usual blogging time and I can't quite pry away additional time because in August, there just isn't very much on account of the alleged "students." Anyway, here are the "goods," for what they're worth.
It was a quiet morning, one that started with my adjusting my seat post height (back) to where it was two days ago. I've got a real problem with using allen wrenches unnecessarily in an effort to make my bike ride marginally improved and then I lack the patience to find out, if in fact, my ride is improved and not just uncomfortable and different, so then I re-adjust things in an effort to erase whatever I mistakenly did previously. I wonder if there's a bike mechanic reading this with dollar signs flashing in his eyes.
One of the things I forgot to mention yesterday is that I saw a Virginia license plate with "BRO ICON" upon it. Wow. Either that guy truly is an icon to bros, which would make him something of a db, or orthodox monks are now driving pearl white Mercedes.
So, this happens. What do you do? 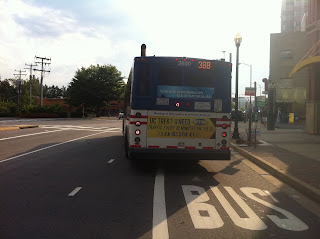 It's a bus driving in the bike lane. There's room on the left and sort of room on the right. There's another bus stop in about 400 feet. I pretty much just rode behind the bus. I think that was the right call, but I guess I could have passed on the left and then cut back across right to get into the bike lane when I was well in front of the bus. As a general rule of thumb, I try not to fuck with buses.
On the bridge, a clearly addled man made a pistolero gesture in my direction and I just nodded back. That's cool. I'm sure he meant no malice. Still a little disconcerting though.
Gotta merge fast if you want to merge at 34th on M. That or wait for the light. I made it all right, or so I thought, but I guess there was a car on my tail in such a way that a woman (Australian?) on a vespa honked at him. I'm normally pretty good at knowing whether I'm about to be hit by a car, but maybe I didn't notice or maybe her "almost" isn't the same as my almost. In any case, when she pulled alongside of me and explained that her honk was in my defense, I said 'oh' and maybe 'thank you' but I'm pretty sure I didn't actually say 'thank you.' "Almost" is problematic and I've been thinking a lot about it since reading this article on sidewalk cycling. Everyone's 'almost hit' by a cyclist or a car or a jogger is a little bit different and it's hard to say exactly what to do about it. Have I 'almost' been hit? Yes. Have I 'almost' hit someone? Sure. Do I know how close 'almost' is and how to standardize 'almost' to ensure that it's abundantly obvious to everyone when they're 'almost' hit and when someone is simply passing closely but not too close? Nope. Is the answer bike lanes? Maybe?
And then I went up Wisconsin and everything about cleaning my bike having a positive effect on my biking were pretty much proven right and I felt much better about it.
Remember those morons who I didn't think would drive by Ken's house? 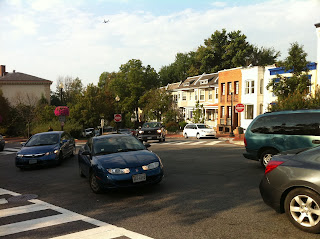 Guess they're real. Sorry for insinuating that they didn't exist. As Larry Summers once wrote...
Slow slog up the hills. A few people 'almost' drove their cars into me.
I rode home in the rain, at least for the first part. Lights, front and rear, and a fluorescent jacket. I was highly visible and yet still not entirely comfortable. It's rained so little that I've developed rain riding amnesia and have no small amount of discomfort riding when the road is wet. I think I'm slower downhill than up. It might have taken me an hour to get home, I don't even know- I was just going slow.
And that was fine. Just now my bike's dirty, so I'm glad that I invested that time (15 minutes) pretending to clean it.
What's the height of high heel shoe that causes someone to fall that evokes schadenfreude (rather than sympathy)amongst people who feel compelled to wear high heeled shoes? 3 inches? 4? 2? I don't know.
No lights out, pretty smooth ride. A few bike people, but not too many. I don't know if people don't ride there bikes home or if I'm just leaving work at a time when most others are still working or maybe biking to a happy hour.