It's my habit to turn my head around after passing to make eye contact with a driver who's inconsiderate enough to drive their car with its right two wheels in the bike lane. Is this sort of a prick thing to do? Maybe. But so is driving in a bike lane. Two wrongs don't really make a right, but I feel like it's my civic duty to at least register my offense. And doing so with a simple disapproving look is far easier and cheaper than skywriting or however else people get messages across. However, I don't think it's especially effective. In the spirit of catching more flies with honey (though I don't know why you'd want to catch flies in the first place), instead I'm just going print up a bunch of lolz posters and start handing them out to jerk drivers. 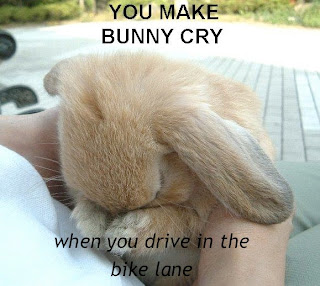 It's a new approach and it's bound to be more effective than staring. Though, does anyone have a color printer that they wouldn't mind letting me use?
It's rare that I actually yell at another bicyclist, but I did today. I said "Stop!" from up the hill and probably too quietly for him to actually hear me as he salmoned across the street against the light. Double foul. It was mostly my just pleading, begging him to be a bit more mindful of his surroundings and asking (through imperative) him not to do something so stupid. My biggest fear is getting into a "car-bike conflict" (bike types like this euphemism because its anodyne and clinical), but my second is watching it happen to someone else. I imagine that it would be horrifying.
Rode behind a meshie for a little (maybe even the same one from the other day) and watched him whir away with his knobby fat tires (Fat Tire?) as we rode through Court House. Hypnotizing. At Veitch, we rode along in the bike lane and another cyclist approached perpendicularly, ringing his bell at us multiple times. No, sir, no. No, no, no, Dr. No, no, Robert Randolph, no. Either you stop and wait at the red before turning right (as is appropriate) or you hustle and get there before us, but you don't ring your bell to let us know that you're coming through and we should be aware of your presence. This man was riding a Trek belt drive jobber and a Dogfish Head cycling shirt (I'm a fan of cycling and a fan of beer, but I really don't understand the confluence of beer branding and cycling attire). Anyway, he rode behind us for a while and then rode up parallel to meshie at the first red light, scooting off down Highland and out of our lives forever. Or maybe until next time.
Meshie was clearly getting itchy about my being behind him and I really wasn't wheelsucking or being pushy or anything, but he started making bad decisions vis-a-vis pedestrians at crosswalks, almost hitting one and barely not almost hitting another. If there's any advice I can give to other bike commuters, it's to not think about other people on bikes around you, especially if doing that makes you prone to act in a way that differs greatly from how you'd normally ride. I say all that with one huge caveat: if a bicyclist in front of you stops at a stop sign or red light, please stop behind them. That's all.
I left Meshie on Fairfax at some point. Boring rest of the way home, but that's ok. At least it was Friday. Wait, what?