If this blog were about anything other than bike commuting, it'd be about socks that bike commuters wear. Because I have something of a problem with socks. I think the reason I'm always thinking about socks is because I habitually forget them and either have to go awkwardly sockless, in a way that's both uncomfortable and unfashionable, or I have to, perhaps even more awkwardly and as I did today, keep on my bike socks to wear underneath my work shoes. Suboptimal. This is why the most forgetful of us should wear black bike socks.
One other thing about socks. This morning, I could only find one of a pair. When I got home, Ellie the Poodle had the other and was sitting behind it in front of her "table where stuff gets hidden, but not really because that's where we know to look." So yeah, be careful about poodles and socks.
Now on to the ride home: what the hell was that? What was it, like 50? Holy crap was it cold. I didn't really expect that at all, given that this morning was rather pleasant. To butcher Augustus, I found DC seersucker and left it tweed. And it was rainy, which I suppose I don't mind as much after being baptized (in a way) by the intense and unrelenting storms of last week. This wasn't as bad as far as the magnitude or velocity was concerned, but the temperature made things interesting and by interesting, I mean sort of awful. But I had a jacket and I had a hat and that worked well enough. Welcome to fall, I guess.
Ride into overhanging branches? Sure. Thanks jackass who wouldn't let me move over. Maybe someone could trim those branches on New Mexico, circa Hawthorne. Is this DDOT? Does the Complete Streets policy take into account overabundant foliage?
Was there a Buy American provision for taxis at some point? Or is the Mercury Sable just a superior vehicle for hauling paying customers? You know who would probably know? Alon Levy.
I learned earlier that the police are guarding our key bridges (and Key Bridge!) from credible threats. Apparently the best way to do this is by blocking pedestrians and bicyclists.
Not cool, MPD. And isn't that NPS land? Uh oh. I see some jurisdictional issues ahead.
Ran into doppelganger Cross Check guy. Almost wanted to say something. Didn't. Feel like this is the worst Craig's List Missed Connection ever.
If you drive in the rain with your lights off, I'm going to assume that you're not the kind of driver who is going to signal before turning. Just throwing that out there.
In the rain, I get a little bit nervous about my bike handling abilities. In fact, I'd say that on average my ability to control my bike are about as good as a Dalmatian's (the dog, not the Croat). So that's why I go slow down immensely when making sharpish turns, as I had to at the intersection of Wilson and Fairfax. And you know what make of car the person behind me, who didn't seem to very much appreciate my slowness, was driving? Take a wild Bavarian guess. At least it wasn't black.
Do you own this bike? 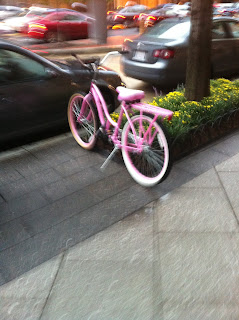 The Official Wife does not like it. She calls it the "Look at Me" bike and she sees it everywhere. You might want to sell it or give it to charity or push it off a cliff because that a "grown-ass" woman (presumably) rides it, peeves her. Thanks.