Wet helmet. Eww.
Two days into this route and I'm already looking for another one. I guess I didn't know how good I had it riding down New Mexico and Tunlaw and through Georgetown, which by comparison to Massachusetts was bucolic and easy and relatively low stress. It's not the Massachusetts is bad- it's direct and it's downhill, so what's not to like?- it's just that I don't necessarily feel relaxed doing it. Perhaps because I descend like a cross between a Schleck brother and a piece of furniture on casters.
And then Q. Which is just a series of blocked bike lanes. Here's a bus at Dupont. I don't think there's an actual bus stop there but rather it's just a place for the bus to chill before it picks up the next batch of passengers. 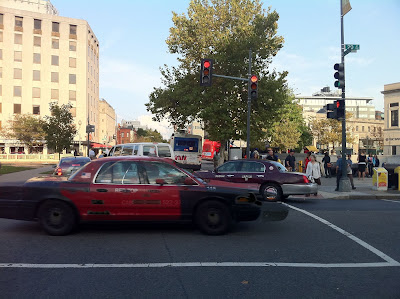 Later on it was a driver looking to parallel park. And then it was a yellow van idling not in the bike lane, but next to the parked cars on the other side of the road making it such that drivers had to drive in the bike lane. Of course a BMW was in front of me.
And then 15th. Here's a picture of that mess. 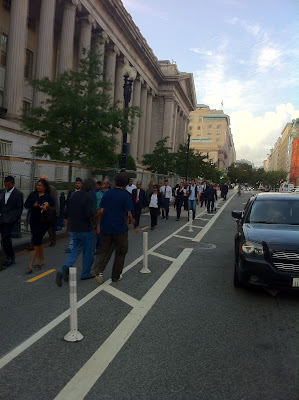 This is terrible. And I really would like one of our local political leaders (or all of them) to address this. This was a tour group. I didn't get a picture of the segway group. Or the next group of pedestrians. I almost wanted to say to the bicyclists coming in the opposite direction not to bother. The problem with the cycletrack heading north is that if you need to get out of the way of a giant group of pedestrians, you're doing so into oncoming car traffic. Obviously, this is problematic.
Fixie guy on Penn refuses to come to a complete stop. Just meh.
Then I got passed by an old lady. This isn't surprising.
Slow going up Constitution. I guess that's the Capitol hill thing.
I think that I'll try something else tomorrow. Maybe farther across town before heading down. Maybe down through the other side of the Mall. I don't know. At least it was sunny.