Once again, thank you to everyone who has commented with route suggestions.You're the real heroes.
Since it was Friday, I wanted to "reward" myself with a longer, less trafficky ride in and since I now live in Armory West, I was vaguely aware of the fact that I sort of have access to the Anacostia Riverwalk Trail which sort of connects to the Rock Creek Trail which sort of connects to the Capital Crescent. So, I decided that I would take the long way in, working my way through, and hopefully out of again, Southwest and along the river and eventually to work. Turned out this added about 4 miles to my morning ride, something that my legs weren't quite expecting and something that my poor, uncleaned, neglected through lack of maintenance bike didn't necessarily seem to appreciate.
Nonetheless, I set off and took 11th down towards the river knowing that the trail is somewhere along there and I theoretically have access. Theoretically, I would have also been willing to follow the signs, but when one pointed me back east and I wanted to go west, I had no difficulty in hastily abandoning my plan and set off down M SE/SW, a six lane east-west sprawling semi-highway that I've never ridden on previously. Turns out that it wasn't that bad as the right lane is abandoned by cars for some reason (maybe because of buses or the likelihood of parked buses, I don't really know) and I made it through without very much incident, only having the leave the comfort of my right lane a few times to get around some construction and the aforementioned parked buses.
Waterfront revitalization, please.
DDOT is currently working on Maine Avenue in an attempt to convert two blocks of it into something less terrible than what currently befalls any pedestrian or bicyclist trying to use it. To that end, they've closed the sidewalk which is pretty much ignored by all bicyclists and pedestrians, including me this morning. Here's a map: 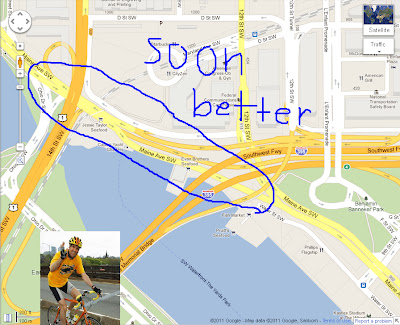 I've conveniently added famous roadie Sen. John Kerry at Hains Point to indicate that this is the place roadies ride their bicycles in what a four year old might call a "zoom zoom" manner. I saw a couple working their way back to home (maybe?) or to wherever people go post laps as I cut over to Ohio. A good amount of bicycle traffic coming off of the 14th Street bridge, but that soon dropped off as I rode up Ohio past the Solar Decathlon, in which I believe participants use a sun dial in the place of a discus. It appears that the University of Maryland won, but their entry was pretty controversial.
As I rode along, I looked over at Arlington, pining for a simpler time in my life when all I had to complain about was all of the stuff that I complained about until a couple of weeks ago. Memories.
Per usual, I refused to dismount my bike along the stretches where NPS advises me to do so and neither did anyone else. I don't know if the signs by the Kennedy Center are still there.
I rode through the Georgetown waterfront park, which is nice, and sure beats riding along K and I picked up the Capital Crescent after passing two MPD cars near the exit of the trail. I don't think the officers were doing any bike enforcing today and that's fine with me.
I didn't get the memo that I was supposed to be wearing long sleeves since that was the outfit du jour amongst the CCT set. 103 bicyclists coming in the opposite direction between the start of the trail and the Manning steps. Not bad. If you didn't ride your bike today, you missed out. It was beautiful.
By the time I got across MacArthur my legs were done with me and I slowly rode the remainder of the way in the small front ring. I arrived at work thoroughly exhausted, though not nearly as gross as I have on more humid days. Progress.
I learned recently  (from literacy) that the ecto cooler colored soap body wash I use has electrolytes in it. Like, as an advertised feature. I've yet to notice the benefits. Have I seemed more electrolytic lately?