I've already seen two posts dedicated to this meeting, so let me first refer you to thos:

Both of these posts do a fine job transmitting the basic facts of the meeting, so I don't mean to reduplicate their efforts. I think my biggest takeaway from the meeting was something that I've pretty much known all along: no matter what the law says, no matter how you interpret it and want to interpret it, the fact of the matter is that when it comes to rights of way and collisions, there's an implicit and underlying bias against cyclists. For anyone who is reading this that attended the meeting, please feel free to correct me, but this is more or less what I heard from the members of the Arlington County Police Department who attended the meeting and spoke about the intersection. (I'll try to generalize and not dwell on the specifics of the one recent bike-car crash).

- The right of way belongs to everyone and no one and both parties in the intersection are expected to yield to each other. (Sound confusing? Yeah, to me too.) Sometimes you have to surrender your right of way for safety.

- The expectation is that cyclists should be able to control themselves and avoid collisions and if there's an incident, it's likely that the cyclist failed in some way.

- Don't get hit. Because enforcement goes all ways and it might be your fault.

To say that I was underwhelmed with the response doesn't even describe half of what I was feeling. While I understand these things (hell, I even suggested to cyclists as much the other day), it's never heartening to hear members of law enforcement basically say that there's no prioritization for the safety of the most vulnerable road users. It's classic windshield perspective and its a real hindrance to Arlington developing into a better community for bicyclists and pedestrians.
I was, howevever, heartened by a few things. One was the push back from Jay Fissette. The other was the attendance and genuine citizen concern for safety at the intersection. It's my hope, as well as the hope of the ABAC and its membership, that calling attention to the dangers of this intersection will open a dialog and perhaps bring about some kind of enforcement regime that is more equitable and more cognizant of the problems that bicyclists and pedestrians face at the intersection daily. And while engineering solutions might benefit the intersection, it's really a mentality change that's needed.For what it's worth, I'm not really angry and I'm not really surprised. Change only comes with pressure and time and this was a good, if frustrating, first step. I also disagree with this idea from the GGW post:

Intersections don't get safer for bicyclists when bicyclists stop using them. In fact, they get less safe for the cyclists who continue to ride through them. If anything, what we need is more bicyclists coming through the intersection, thus making it even more obvious for motorists to be aware for cyclists.
Anyway, here are some pictures and a video. If anyone has any questions or wants to provide additional gleaning, please feel free to do so in the comments: 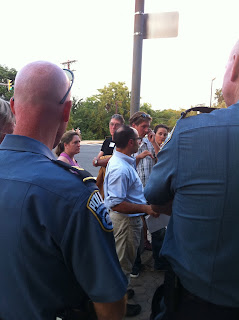 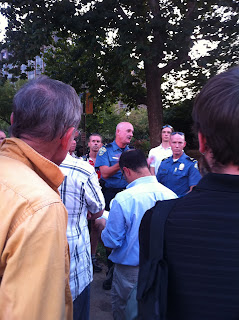 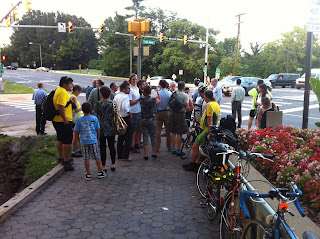