Full from non-hypothetical leftover strada, I set off at a brisk pace this morning and made reasonably good time down East Capitol. I'm still familiarizing myself with the mores (morays?) or the Armory West/Hill East/Capitol Hill "bike culture" and what I've learned so far is that turns on red at Lincoln Park are ok and acceptable and that hanging out in the dead space between near Stanton Park between 6th and Maryland is totally fine and that jumping reds on East Capitol is pretty much the norm, as is riding through the Capitol grounds. So is cutting off driver's right turns, which I'm not really crazy about and don't actually endorse. I watched a bicyclist today narrowly squeak through the space between a right-turning driver at 1st and thought that waiting would have been more prudent. It's like a self-inflicted right hook, which, while physiologically difficult in the boxing sense of the term, is rather achievable in the bicycle sense of the term and, in any sense of term, ought to be avoided. If you see that the driver is turning right, just wait. Really, it's better that way.
Are you following Fiona Greig on the twitter? I wonder if not owning a car is going to be for DC Council elections what not owning 7 houses was for the presidential election. Which is to say an issue of very little consequence.
Unlike caution tape, which is an issue of great consequence. For whatever reason, the state security apparatus has decided to string caution tape across the retractable barriers at the entrance to the Lafayette Square on Madison Place NW. This means that bicyclists, using the prescribed route of the 15th street cycle track, must ride on the raised sidewalk in the park, crowded with pedestrians, rather than on the road itself. I find this to be annoying, inconvenient, and not safe. Here's a photo from before the installation of the cycle track. Note the absence of caution tape.

Here's a photo from today, from the opposite direction. Note the tape. 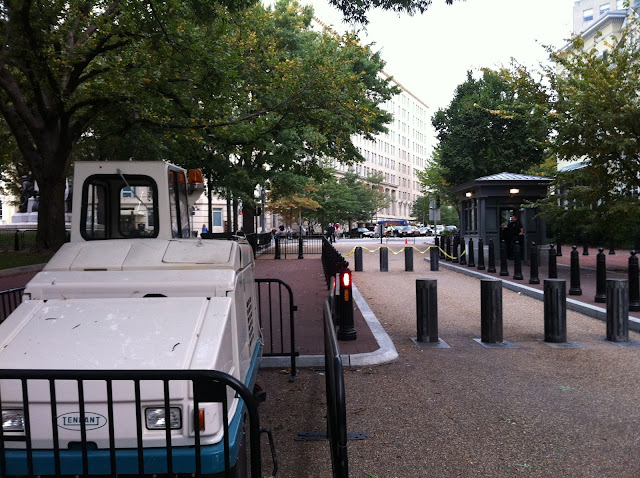 Apparently, my photographing the tape was something of a problem, or at least noticeable enough to the guards that, unbidden, one of them yelled out "File a complaint with the city." When asked if that would actually accomplish anything (suspecting that this area falls outside the authority of any city agency), I was met with a snarky "how should I know?" Well, if you don't know, why suggest that particular course of action? To the other guard I said something like "I know it's the way they designed it, but it's really inconvenient" to which I got the response "It's only up because people don't come through here with caution" or something to that effect. Well, thanks for protecting me from my own lack of caution. Way to look out for my safety. I feel so much better riding on a brick sidewalk between barriers and trees and pedestrians rather than on a perfectly flat road. This isn't helping anyone. I'm not really a trouble-maker or a rabblerouser and I didn't want to stand about 50 feet away from the guards shouting back and forth about tape, but it's inconvenient and it serves no purpose other than to prevent bicyclists from using the road, as evidenced by the fact that it wasn't necessary before the cycle track was installed. Is this the biggest issue in the world? No, it's not. But just to be clear, the tape isn't there to "protect" anything. It's not part of some real security system because, frankly, it's just tape. The only reason it's there is to deter bicyclists and I think that's stupid and wholly unnecessary and an example of security professionals overstepping their bounds and exhibiting bad, anti-cyclist judgment. So just take the tape down. On a side note, is this issue too small to pass the "DeBonis threshold"?
I also rode past OccupyDC, or whoever (it's always been confusing to me who's who and where each group is) is at Freedom Plaza to hear a man on a microphone say something about "not forming committees" which I think is great because who likes committees, right?
15th was easy going as was R, though I think it'd be better of the bike lane were on the inside (sidewalk side) of the car parking. If only we had the technology and vision for this bold feat of engineering...Though I suppose this would make it worse when there's construction equipment extending into the roadway since it would make it that much harder for cyclists to merge into the roadway.
Do you like reading about bike stuff in other cities? I recommend Grid Chicago. More than just bikes, too.
Finally have my hill legs for my Massachusetts climb. It always takes some time when you switch to a new route to get acclimated to the terrain, but it comes eventually. Was that banal enough?
Nothing worse than workplace locker room conversations. Nothing. Not even caution tape.