October was the most successful month yet for this blog in terms of readership and I want to thank you all for visiting, perhaps even twice daily. My self-esteem is measured entirely in page hits and some day, with your support, I'll have enough confidence to reveal my true identity to the world. I don't blog anonymously? Crap. Oh well. In any case, thanks again.
Why is it that I can go for hundreds of feet at the time in the right lane and only when I'm forced to ride in the door zone as I pass a parked car that I'm passed? Bad luck, I guess.
Sometimes tailgating is a good idea, even though I'm loath the admit it. To clarify, I mean when I tailgate, not when a driver tailgates me, which is never a good idea. When there's two lanes of traffic in the same direction and one lane is stopped (lets say waiting for someone to complete a left turn) and the other lane is moving, I do my damnedest to try to stay as close as practicable to the car in front of me. I do this not because I'm curious about what might or might not be in the back of their hatchback (it's almost never anything cool), but because I don't wait to leave just enough space for a driver in the stopped lane to think that he can switch lanes, which could be rather hazardous to my safety. I think I handled some tricky situations especially well today along Massachusetts, which is a whole street dedicated to tricky situations, and I'm glad that the light sequencing makes it such that I get a chance to stop and congratulate myself for 25 or 30 seconds before heading down Q. Good for me, I thought. Way not to get grievously injured.
Speaking of grievous injury, I noticed fewer dolts out there tonight without lights. Progress? Maybe. But any number higher than zero is still too high. Seriously, if you read this blog and for financial reasons can't afford bicycle lights, please email me [talesfromthesharrows@gmail.com] and I will procure you lights. That's how much I care. Because I actually have some skin in the game, not inasmuch as I'm a bicycle advocate, whatever that means, but inasmuch that I don't want to crash into you. I have one general goal for each commute and it's to get my ass to home or to work with as little inconvenience possible and anything that contributes to that, including your having bicycle lights, is greatly appreciated.
Am I paranoid if I think that everyone wants to race me? Do I look like I want to race? Because if you roll up next to me and give me the once over and then anxiously stare at the light waiting for it to change, it sort of looks like you want to race. And really, there's not enough room to race. It's crowded enough with the people driving in it or a UPS van parked in it- it certainly can't handle you trying to get the jump on me.
11th street just isn't working for me any more. It's too craggy and crowded. I need a new southbound route home. 15th doesn't work either. Suggestions? Is it 7th? Is it the MBT? Is it 11th for a little then M then 7th or 5th or 4th or whatever? Is it riding down through Georgetown and making me way east some other way? Is it any route that precludes my asking any more questions?
And here's a bad picture of the Capitol. Speaking of which, someone parked a black BMW by the security gates near the grounds. I think it's meant to be a warning. 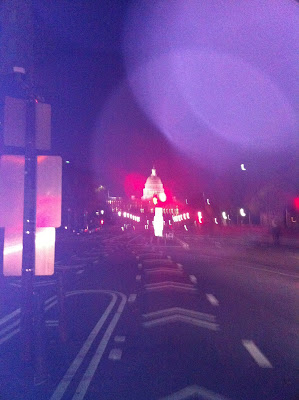 It's was fucking amateur hour tonight. It doesn't count if you have a rear light, but don't turn it on for some reason. It's also not cool to try to pass people by riding up on the sidewalk and then swerving back into the bike lane at the next curb cut. Nor is running lights and almost riding directly into me. Seriously, people. I don't want to sound like a jerk, but get your shit together.
Another run-in with the the woman whose fenders I noticed and liked yesterday. Saw her around the same place as I did yesterday. I rode behind her again, but I never really got the chance to say anything until I turned onto A and she kept riding straight down Massachusetts, at which point I said "I like your fenders," which got me a "Ah, yeah, thanks" and a smile. If anyone is writing the worst bike commuter-themed romantic comedy screenplay ever, there's your meet cute. You're welcome.