And now for something completely different. Well, not really. Not at all.
It wasn't as cold as I feared and I was plenty afeard. Caliban afeard.
It's a great feeling when you're the last person to ride through the light at Mass and Garfield and you can just ride down the hill relaxed and unworried about a driver pulling up too closely behind you or passing you with not enough distance. Little things like this can (and do) make a big difference to me on my ride home in terms of my demeanor. I'm much demeanor when a driver acts like a dope. Much.
I witnessed some poor decisions tonight. I watched an unlighted bicyclist run a light (not jaywheel) and cut off some drivers. I watched a lady jaywalk and then an approaching driver refuse to brake, instead opting to honk and swerve, even though it was pretty obviously that slowing would have been safer for everyone. And I narrowly avoided a driver who sped past me in order to beat the light in spite of the approaching loud and flashing fire engine. Full moon, I guess.
The hollandaise season (that's what it's called, right?) is one in which bike lanes seemed to be more impeded by delivery vans and trucks than usual, including those of the USPS. Neither rain nor snow nor dark of night will keep these steadfast couriers from blocking my way home. Drivers mostly understand and the ones who don't mostly abide, like the Dude, but not really.
One of these days I'm going to get t-boned on Q by a jumpy bicyclists in the Kleinway (haven't used that one in awhile a while). And I'm going to be so mad. One of these other days, I'm gonna get walked into by a pedestrian jaywalking between cars stopped in traffic. Note: stopped cars doesn't mean the bike lane will be empty. Just a friendly reminder. I hope that by committing this to writing neither of these things actually happens.
Whenever possible, I try to ride to the front of queues of cars and trucks and buses when there's a bus in front. It's just a visibility thing.
Another bicyclist gave me a big smile when we crossed paths at 11th and Pennsylvania. That's friendliness!
The Capitol is pretty much a symbol of contemporary America, in that it's surrounded by free parking lots and over-militarized security personnel. My suggestion about the latter: classier outfits. I'll even let them keep their gigantic guns, but it'd go down better with me if they looked more like Beefeaters, but Americanized enough so tourists don't gawk too much. I'd start here. Wigs optional.
Segway commuter! And some grey beard on a Bianchi! And some other guy, who was wearing khaki colored jeans. They all jumped the red and 2nd NE and East Capitol. I expected the cop to say something, but he didn't. Guess he wasn't psychic or he would've stopped them.
And now for something completely the same. But not really. BUTTONS! THEY'RE HERE. And here's what it looks like on the bike: 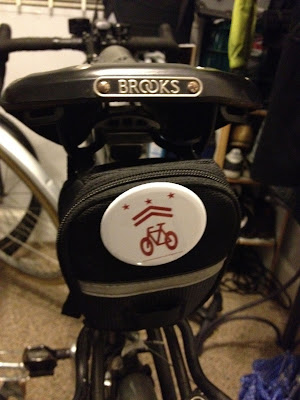 Tell your friends. There's a possibility that I'll bring 16 of them with me to the WABA Holiday Party and would be willing to sell one to you if you tell me the SECRET PASSPHRASE (it's: "um, can I buy a button?" Remember the um!) If you've already ordered, I'll be shipping/delivering in tuxedo in the next couple of days.