Today was the first time I've taken the Haul from Armory West to work and it was indeed a haul. The bike is heavy and I probably live too far away or too downhill do this with any degree of consistency. Or at least consistently with any degree of comfort, as I felt considerably labored by the middle of my trip. I wasn't even carrying anything with me, aside from the content of my pockets and a u-lock. But it was a nice change of pace, especially the part where I dressed like a normal person in jeans and a sweater and a winter coat, scarf and non-bike gloves. The coat even has a bright green bike pin on it from I don't know where or when. How jaunty of me. 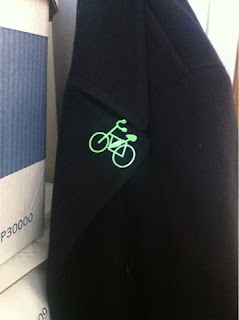 I complimented a guy on his Brompton by saying something like "I like your Brompton" when I think I meant to say something like "I like your bike." I was worried that he was going to prompt me on exactly what aspects of his Brompton I actually liked and my answer would have been its color, a lovely dark green, but luckily, my insane fears of his desire for specificity within my compliment didn't come to fruition.
At the intersction of Vermont and H a passing pedestrians shouted "Helmet" at a woman riding (helmetless) riding in the opposite direction. If his concern was so much for her safety, maybe he should have yelled "Signal" or "Yield" at the driver of the turning SUV.
There were either two bicyclists behind me on 15th or one guy talking into a cell phone. I've noticed a lot of bicyclists lately using their commute time to make phone calls. I find this to be somewhat odd, but maybe because I like to use my bike time as quiet time. It's, sadly, probably the only time I'm not looking at my phone or listening to a podcast or consuming media of some sort or the other.
The Alice Swanson ghost bike is gone. I don't quite remember when I last saw it there. There's still white some stains of white paint on the sidewalk. It reminded me of a Sarajevo Rose.
Now I'm depressed.
Ok, let's finish this thing. Here's a story about how bicyclists run red lights more than drivers do. It's based on this study. Here's my favorite line:


It should be noted that bicycles are not the only one at risk of injuring pedestrians, as the motor vehicles who ran red lights were of equal or greater threat to those legally crossing the street.

Equal or greater! Anyway, it's student work (as they might say disparagingly on Project Runway), so make of that what you will. I guess I'm still just tired on the conflation of safety with legality and vice versa.
Cold or no cold, riding a bicycle in sunny weather is pretty fantastic.Riding it in normal people clothes is also pretty great. I sat out the Great Cycle Chic Debates of 2011, because I don't really have very strong opinions about the desirability/importance/undesirability of looking pretty while biking, but I guess insofar as I have any opinion, I guess I'd say this: if you want more people to ride bicycles, don't worry about the clothes they wear or don't wear. Just ride your bike a lot, fully integrate it into how you get around and live your life and when people eventually ask you about your bikey lifestyle (because it almost always comes up) be honest about the costs and benefits. Some will give it a try and that's pretty much all you can ask.