I BLOG YOUR RIDE: Grant and Sydney

Sydney is a little kid. Not just born yesterday little, but still pretty little. She probably hasn't lived in a world where Justin Bieber and Selena Gomez weren't a couple. She's lucky. And not just because of that, but also because she's got pretty amazing, pretty bikey parents, one or both of whom decided to support me support WABA with the purchase of an "I BLOG YOUR RIDE" through the sale of my services (hack writing and equally poor bicycle riding) that was my end of year fundraising effort. And so this morning, I set off from chez moi to meet up with Grant and Sydney and ride with them so I could subsequently immortalize it on the virtual pages of the 37th most popular DC bike commuter blog for the remainder of eternity/until we replace the internet with internet  2.0 aka 2 Internet 2 Furious: Tokyo Drift.
We couldn't have picked a better morning. Cool, but not cold and with a yellowy sunlight that poked through a low hanging cloud cover, the weather begged for bike riding. On my journey across the river, I passed waves of cyclists fleeing commuting from Arlington or thereabouts into the city District where they most likely ply their wares in whatever fields fairly well-off middle-aged white guys work. Cheesmongery, I think. Washington really is a one industry town.
After a fair amount of wending and only a little bit of cycling right past it, I found my way there. Our mission, and we chose to accept it, was to bike Sidney to school, which, coincidentally, was near the old chez moi in the George Mason/Pershing nexus of the universe. Nostalgia. I was riding the Cross Check and Grant would be pedaling this beauty: 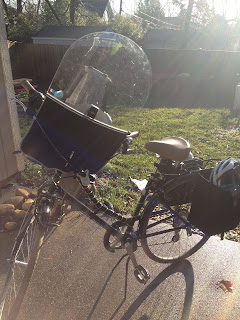 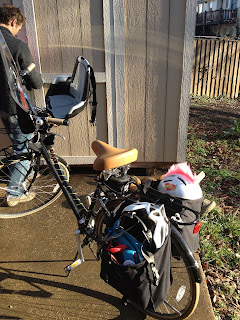 It's a Biria and it was purchased with the intention of being used as a child schlepper (my term. It probably sounds better in Dutch, whatever they call it). I asked Grant about the having the child seat up front and he told me that there are a few advantages. One is that Sidney seems to really enjoy it. Another is that when it's cold, he can duck behind the windscreen as well. It also puts some weight on the front wheel, which seems to agree with the bike's handling. The bike also has fenders, front and rear racks and a chain guard- all important considerations, deliberately thought through. I'm not really an expert on so-called "children," whom I understand to be a shorter and newer set of humans to whom juice box manufacturers deliberately target with cartoon ads, but Grant explained to me that having a bike that he could ride with very little fuss (no changing, no clipping in, just being to get on it and go) is sort of a big deal when you have a young child, whose patience might lapse with any substantial, or insubstantial, delay. That makes sense.
Sidney hardly made a peep when helmeted (her helmet had a pink feathered mohawk and a sticker that said "I love my mommy") and sat in the bike with no fuss whatsoever. Grant told me that she's taken to the bike quite easily. I asked if they employed any special strategy (maybe candy?), but he said that they just treated the bike like it was just the normal way to get around and Sidney was quite happy to embrace the opportunity to see more stuff, as they can cover more ground on the bike than they could when she was being pushed about on the stroller. The kid's smart.
We rode the sidewalk along Washington Boulevard to Pershing and crossed there. Rather than take Pershing, which isn't a terrible route but not one that's the most family-friendly, we worked our way through the very quiet neighborhood streets that run parallel. We biked at a stroll's pace, the kind of speed you go when you're just out and about and having a good time, which I very much was. We passed a playground, but didn't stop. Maybe I should have spoken up. I would have enjoyed a slide.
I used some of the time during the ride, and much of the time after, to pepper Grant with various questions about his bikey lifestyle, which isn't too different from most utility cyclists, except that on the weekends he's a Cat 3 racer. Cat 3 means "very fast." If I had to classify myself in a Cat, I'd probably be "calico". He told me that his team was a mix of guys, some of whom more than others use their bikes to commute and run errands and that he'd been racing for six seasons, having started when he was in law school after more than a decade off the bike. He said that he definitely notices a difference in the behavior of motorists when he's riding his road bike from when he's riding his [Dutch word for child schlepper] bike. This is unsurprising. (Shouldn't this be called the Mary Poppins effect? Mary Poppins' responsibility was overseeing children, right?) I asked him if he's ever had a "close call" when riding with Sydney and he told me that he hadn't. That's good.
We headed through the neighborhood and eventually were stopped at the intersection of Glebe and Pershing, alongside an SUV in the right turn lane. Apparently, Sydney makes drivers smile. I haven't shown you a picture of her yet, but when you see it, you'll smile too. I think this is another advantage of having the kid up front, rather than in a trailer being pulled behind you. Obviously, size plays a part in this. I asked Grant if they considered a cargo bike, and they had, but decided in this one to start given the comparatively expensive price of the cargo bike. I wouldn't be surprised, though, if there's one in their future. Cargo bikes are pretty cool. But for now, this bike seems to do it all and they're very happy with it.
School was off of George Mason. Grant dropped off Sydney, but not before I snapped a few pictures: 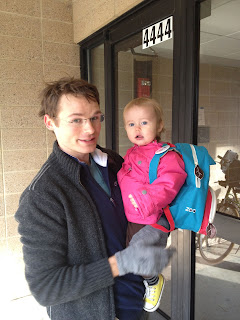 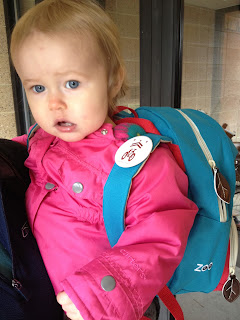 Note the awesome button.I bet she's the coolest kid in school.
I asked Grant about other parents and biking. To the best of his knowledge, he's the only one who comes on a bike, but he said that other parents do ask about it. I asked if he's gotten any of those "isn't it unsafe??????" kinds of questions, but he said that he hasn't. Most of the questions he gets are about the upfront kid carrier, which I think is pretty rare about these parts. I've never seen one before. Having now seen it in action, I think that it would be cool if more parents had them.
After the drop off, we rode back through the hood and up to Clarendon for some coffee at Northside Social. (Other ride bloggers: I will also get coffee with you if you want. Or Skittles. Or whatever) We talked more about biking and the "quality of life" issues associated with it.  And the convenience. And the sometimes difficulty in convincing non-bikey people that it really is convenient to bike places (If any non-bikey people are reading this, it really is pretty convenient). We also bemoaned the Whole Foods bike parking situation, which I think is a must for any conversation about bicycling and Arlington. If you don't, an alarm goes off at Bike Arlington headquarters and they dispatch someone immediately.
I asked a bunch more questions (journalism?), but I don't remember exactly what they were (bad journalism?), except for one, which was whether Grant and his wife Gillian had actively planned to incorporate biking into their child raising strategy (I assume something child raising, much like barn raising, requires strategy. And ideally a team of Amish). He said that it just kind of happened and that there wasn't really much thought or planning to it. He and Gillian got around by bike before and they didn't really see any reason to stop once Sydney came along. It was just a question of figuring out how best to do it. I imagine that this is the case with a lot of bikey parents.
After some time, Gillian arrived and it was a pleasure to meet her as well. We all talked for a while about the usual stuff. You know, stuff like bike infrastructure and sprawl and road costs and highways and living in bike-friendly communities. And then it was time to go.
It was a great morning and I really enjoyed myself. I think that Grant, Gillian and Sydney have a pretty good thing going, a kind of thing that seems totally manageable and not really in any way out of the ordinary, even though it sort of is. It didn't look any more unmanageable to my DINK eyes than car-based child schlepping, but I'm not really an expert. I'd publicly (at least to the 9 of you who read this) like to thank them once more for their generosity and for giving me the opportunity to hang out and ride around with them this morning. It was a lot of fun.