I didn't think I would, but I did ride today. It was on a Bikeshare from the Metro to work. It was also only like a mile. Highlights included my CaBi's swiveling seat thanks to the adjustable clamp not closing tightly enough around the seat post. Frankly, this is more of a bonus feature than a problem. All bike seats should swivel. It's way more fun and/or poses a degree of difficulty if you're into that sort of thing. With regard to the ride itself, it was boring. It was hot. Still better than waiting for a bus. Bikeshare has the potential to be a real bus slayer, in a metaphorical transportation sense, not a literal "oh my god, that bike just smote a bus with a giant sword" sense. It's raining now, so I'm not totally sure if I'll ride home or take my chances with WMATA. If I ride, I'll write something up. After I wring myself out. Anyway, enough nonsense about me and my commute. (It's not like that's the whole premise of this blog or anything.) Friend of the blog, and previous guest-poster-er, Marc has been gracious enough to share yet more tales and pictures from yet another trip. One million thank yous and one million congratulations on your recent wedding!

Since I know Brian likes to take a break from his demanding gig as DC's 37th most popular bike blogger [Ed. Note: I don't. This is my only outlet for creativity. Now I'm gonna have to go paint a bowl of fruit or something], I thought I contribute some experiences and musings from my recent trip to the great Northwest.  My wife and I just got married a couple of weeks ago, and our honeymoon was an Alaska cruise that began in Vancouver.  Having heard that Vancouver is a wonderful place to be, my wife and I planned to get there a day early and explore.  Even though my wife isn't really into cycling, she sees its value/fun for sightseeing and knows she can indulge me at the same time, so she kills two birds with one stone.

The honeymoon actually included three bike trips, two in Vancouver at each end of our trip, and one in Juneau, Alaska.  I think Vancouver can teach us some valuable lessons about cycling infrastructure, so I figured I'd share my experiences there first.

First off...if you have any desire to leave DC, but do not have the means, do NOT visit Vancouver because you will forever be sad that you cannot move there yesterday.  It is amazing.  I won't get into it here, but it's probably the one truly northern place I could see myself moving to.  Given that it's a relatively hip town and basically an extension of the San Fran/Portland/Seattle cultural corridor, it's pretty progressive in its transportation policies.  Lots of mixed use high rises, good public transportation, noticeable lack of freeways (there's only one, and it just barely runs in the city limits), and of course, bike infrastructure.  I was very impressed with Vancouver's bike infrastructure, not just because of its scale, but a lot of the minor details are well thought out and the system isn't just an afterthought.

Although Vancouver doesn't have bikeshare (coming soon, maybe...mandatory helmet laws may be problematic though) it does have a ton of bike rental shops, so it's very easy to find a bike and go.  My wife and I stayed on the north side of downtown, which is right on Vancouver Harbor.  The downtown area is basically a peninsula, with a huge urban park (Stanley Park) at the tip.  This park is encircled by an MUP, which has separate paths for cyclists and peds.  The path is also supposed to be one way, so at no time do you have bikes or runners coming at you. 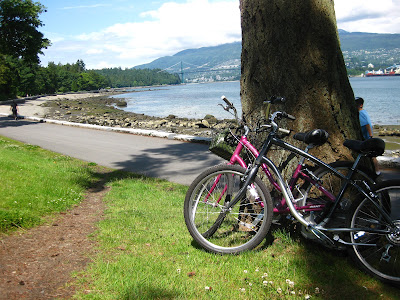 Within the city, there's a wide range of infrastructure, from bike lanes, to cycletracks, to green lanes, and they all get lots of use. 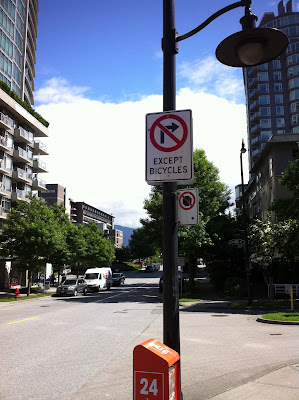 I mentioned earlier that Vancouver paid attention to little details with their bike infrastructure...even things as simple as street signs.  If you look closely at the below pic, you'll see that there's a bike symbol on the street sign above the intersection, signifying that there's a bike lane on the cross street.
I think the neatest thing I saw were these bike "turn lanes".  They weren't at every intersection, but I saw them in several places where two major bike routes intersected.  I love how they keep turning bikes from interfering with the pedestrian crossings and the curb cuts for handicap access. 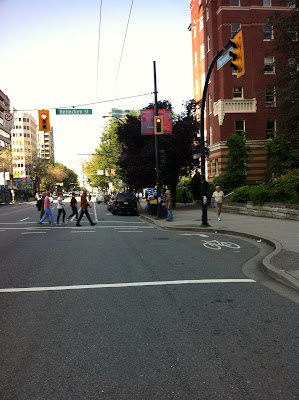 Although Vancouver has some actual green lanes (see photos above), the green paint seems to be reserved mostly for when the major bike lanes cross intersections.  I think this is a great way to help minimize right hooks, as it gives drivers a visual cue that takes up more of their line of sight. 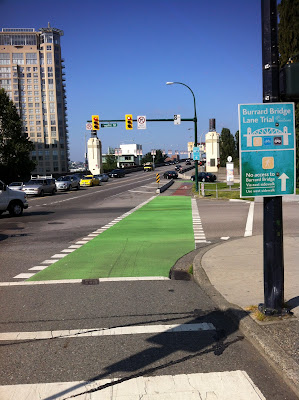 I think Vancouver also has some great lessons on development...build it, and people will come.  They have a shitload of shoreline, and what's not parkland has been developed with paths, gardens, marinas, public markets, and the like.  Seriously, I saw very little of the shoreline that did not encourage people to use the space.  I think we're getting there with the SW and SE waterfronts, but it's an investment well worth making

Does anyone know what the the "ideal" bike rack is, according to LAB or WABA or whoever?  I gotta say, I think these are pretty damn close.  They fit tons of bikes and make it very easy to lock the frame and front wheel.  These seem to be the standard rack Vancouver uses...I don't remember seeing a lot of the inverted U racks. 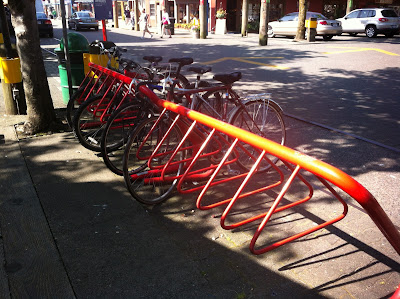 Highlighting the development issue, one of the coolest places in Vancouver is Granville Island.  It's a small island with a bridge running over it, but instead of letting it become the typical underpass, it was turned into a public market/family area/artists enclave/high end shopping district.  You can't see it that well in this photo, but it's the area in the center of the photo. 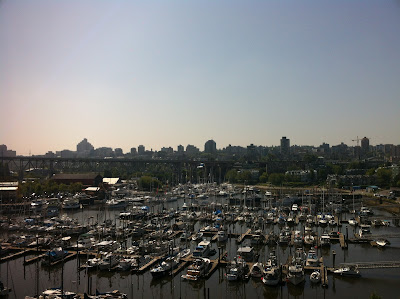 In Vancouver, we boarded our ship and headed off for Alaska.  Instead of paying the cruise ship an exorbitant amount of money for shore excursions, we arranged our own.  We noticed the ship offered a bike ride up to Mendenhall Glacier in Juneau, and we found out that we could easily rent bikes and ride up their on our own, since the glacier is right outside town.  For the ship excursion, I think it was like $125 a person, and a shuttle took you within about 3 miles of the glacier and they let you ride from there.  We rented bikes for like $40 a person for the whole afternoon and rode 25 miles round trip from Juneau to Mendenhall glacier, squeezing in a stop at a local brewery for free samples.  So yeah, I think our self-made excursion probably was better.

On the ship, our assigned dinner seats were with another early 30s couple who were pretty into biking and outdoors stuff, who had not made any plans for Juneau.  We invited to come along on the bike ride and they were more than happy to join.  The folks at Cycle Alaska were super accommodating and were able to find bikes for our new friends on short notice.  If you ever find yourself in Juneau, stop by and say hi.  They even told us we could lock the bikes up outside the shop if we weren't back by closing time, at no extra charge.  Freaking awesome folks.

I was a little wary of the route from Juneau to Mendenhall, since I didn't picture Alaska as a cyclists paradise.  However, it turns out that the route is all bike laned or MUPd.  Even in the spots where we rode in the road, like making left turns or whatever, the drivers were very patient and no one honked or revved their engine or anything.  There may have been some slightly drunk cycling going on after the brewery stop that may have resulted in some dumb cycling, but even then, the Alaska drivers were super nice.  We also saw way more cyclists than I anticipated...all kinds of folks ranging from roadies to locals running errands.  I think cycling, in addition to appealing to the urban, progressive types, also is the arena of the rugged individualist types you find in places like Alaska...or maybe I'm just full of shit, I don't know.  But I think we'd be wise to remember that there are cyclists on both sides of the aisle, even if it doesn't always seem that way.