First commute of the week. Light rain. Air like custard. Not in a good way.

I put some non-custardy air in my tires prior to leaving and that made a tremendous difference in the quality of my ride on these new tires. I was a bit trepidatious before the ride since this was my first ride on wet roads with the new tires, but they seemed to do all right and I managed to not fall over or skid or come close especially close to falling over but maybe I can attribute this to my handlebar mounted gyroscope and my years of acrobatic training.

Would you date someone without fenders on his bike? Would you marry him? Is this why couples ride side-by-side? To avoid the road spray and the relationship questions that arc up with it?

I see a lot of drivers who half-park. You know, like they could get into the parking spot the whole way, but since they're idling, maybe to pick up a passenger, they choose not to and instead take up a parking spot and block the bike lane. Just park. It's ok.

Another taxi u-turning in front of me across the Pennsylvania Avenue cycletrack. I ride this route twice a day for a total of maybe 15 minutes in aggregate between morning and evening commutes and I think I average about one illegal u-turn every three commutes. Am I just happening to witness an anomaly (traveling at the times when drivers are most likely to make u-turns) or are my observations a representative sample of how frequently this is happening? Though I suppose it doesn't matter if you wind up on the hood of an anomaly or under the wheels or a representative sample. Here's a letter from our good friends at the Commission of Fine Arts to Jim Sebastian of DDOT concerning the Pennsylvania Avenue bike lanes prior to their installation (emphasis mine):


26 March 2010
Dear Mr. Sebastian:
In its meeting of 18 March, the Commission of Fine Arts reviewed the concept design for bicycle lanes on Pennsylvania Avenue between 3rd and 15th Streets, NW. The Commission approved the proposed design without colored pavement on the bicycle lanes or median, noting the importance of the avenue's design character as a prominent visual symbol of the nation. The Commission also recommended against the installation of reflective plastic stanchions, commenting that these would be intrusive and incompatible elements in this iconic streetscape.

The Commission delegated the review and approval of the final design to the staff which, as always, is available to assist you with the next submission.
Sincerely,
/s/Thomas E. Luebke, AIA
Secretary


So, just remember that if a driver ever injures you making a u-turn because there are no protective bollards to prevent them, at least an iconic streetscape has been kept free from intrusion and incompatibility. Your unwavering commitment to aesthetics is vastly more important than the trifling pecuniary matter of your hospital bills or replacing a broken bicycle.

Further along Penn, I looked over and saw a guy riding next to me. Um, ok. I decided to pedal faster since I wasn't really looking for a bike buddy. Maybe some other day.

I think the place I'd be most likely to be collided into by another bicyclist in on 15th between Rhode Island and Massachusetts. The pavement there is especially bad in the southbound side of the cycle track and there seems to be more than usual amount of rush from bicyclists when the light to cross Rhode Island turns green. I'd rather not be the victim of someone trying to race past another cyclist and focusing so much on that endeavor that they fail to notice me toddling along in the opposite direction. I'd also rather not be the victim of an expensive, nuanced and elaborate art heist and this is why I don't purchase expensive art. That and having no money and no taste in fine art. My idea of good art is dogs riding their bikes in a protected bike lane along Pennsylvania Avenue.

Someone explain me this. Why leave the bike lane to wait at the corner when you can just wait in the bike lane? They got back in the bike lane on the other side of the intersection. I also think that the first guy, the one closer to the black Prius, might be the official videographer for BicycleSpace.


Maybe this is why I'm so pissy about the PennAve u-turns today. Four years. 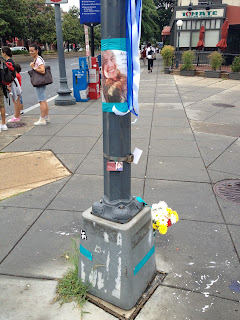 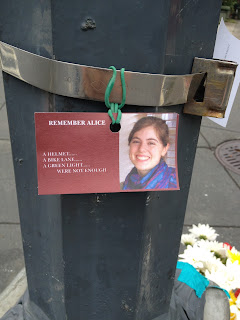 Ride up Mass was fine. Trees were cleared. Traffic, especially bicycle traffic, seemed lighter than usual. Maybe they'll all be out this afternoon, when it's nicer.