Ride In & Ride Home 7/19: Those actually were the droids they were looking for

It's been a long day, which started with a 7AM trip to the local hardware store. Please excuse me if the details are hazier than usual and if you find the post lacking in any way, please flay me in the comments. I take reader feedback very seriously. About as seriously as the opinion of the Safeway checkout lady who told me that I shouldn't eat donuts for breakfast, lest I turn into the Pillsbury Doughboy. Pillsbury doesn't even make donuts. You'd think someone who works at a grocery store would know that. Also, related to my breakfast, are grocery store donuts considered "generic," like a non-brandname medicine? Also, not related to my breakfast, this was on the way back from the local hardware store, Fragers, where, I learned last night, I purchased 4 (four) tubes for my bike, which had remained unused for the previous two days upon my discovering a slow leak. It was good to fix the bike and good to ride it again. How I missed you, Rocinante.

Anyway, the bicycle section of the hardware store was pretty good. And since it opens a good three hours earlier than any nearby LBS, I was happy to shop there. Here's a picture: 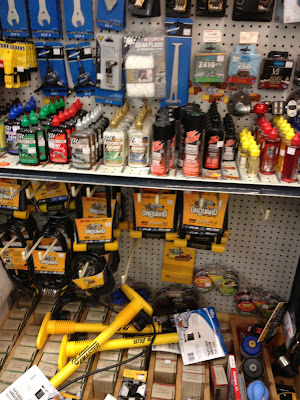 I wonder if more hardware stores could/should default as de facto bike supply shops in areas that couldn't support a full bike shop. Obviously they wouldn't have the full value of a real LBS (you know, with the lack of bikes for sale and the lack of professional mechanics), but I think it'd be a good way to put bike stuff (tube, lube, chain cleaner, etc) in communities without bike shops. Of course, I'm not totally sure how many underserved communities are served by hardware stores, either.

Passed an SUV with a ROMNEY sticker by Lincoln Park. So you're that Republican in DC, I thought.

For much of the ride, I was mostly overwhelmed with feelings of agape. I can't say I've ever felt that while driving. Every tried to smile at each bicyclist I passed. I don't know if they were unsettled by my unrestrained happiness. Probably. On 11th Street, I even saw Ted, riding his Bikeshare in the opposite direction and I shouted a friendly hello. Honestly, DC isn't a big town, but I'm hardly a social person (there are hermits who get out more than I do) and yet, I'm constantly seeing people I know riding their bikes to and fro (this is not a Chocolate City reference).  Bicycles can simultaneously "extend the walk" and shrink the city. It's fantastic.

Crosstown and R and I was tripled-shoaled, but I didn't care since I soon passed two of the three and soon turned. I glanced at the new construction on 14th street and imagined the building five stories taller and how if they were all like that, no one would even notice. Sort of like how a 6'6'' basketball player is "short" only if he's playing power forward or center. It's all relative. I firmly believe that there would be no negative consequences if all of DC's nine story buildings sprouted three more stories. I mean, aside from the fact that our buildings are spontaneously sprouting, indicating their possible genetic manipulation by a mad scientist who spliced their i-beams with mushroom DNA.

The backend of the ride was peachy. Same good feelings about bicyclists, fewer bicyclists whom to creep out with my off-kilter smile.

At work, I found this. It's a bike repair stand. 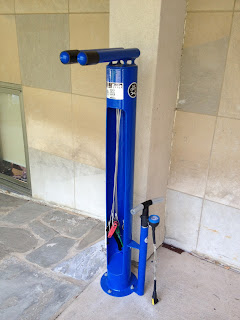 I stumbled upon it totally accidentally. I'm glad to know that I now have the ability to "repair" my bike next to the Provost's office. I'm sure he'll be able to help me when I start haplessly wrenching stuff. It's at least a place to inflate the tires. There should be more bike repair stands. Maybe where there used to be phone booths.

At the end of the day (you're another day older?), it was an easy ride home on the normal route, made complicated by a flashing red light at the intersection of Massachusetts and Wisconsin. No fewer than 8 lanes of traffic meet here and I was just a guy on a bike, so my position was somewhat precarious. My strategy at inoperable traffic lights is almost alway the same. Find a car, and be it's buddy. Get right next to it and go when it goes. Trick is to never act like a pedestrian. No one will yield. I might still be there if I waited for a driver to yield. I'd probably have a long gray beard and maybe a cane by the time I crossed the street. Where the cane came from, I couldn't tell you. Maybe I fashioned it from my bike or maybe I found a stick and whittled the cane used my bike multitool. I actually made it through the intersection pretty quickly and avoided much of the scorn and honking of frustrated drivers who were scorned and honked at by other frustrated drivers. I don't know if there's a technical term for this, but any system that can't handle a minor, tiny disruption without totally breaking down, doesn't seem like a reliable system.

Where Q meets Mass, I encountered a driver insisting that the NO TURN ON RED sign did not apply to him. I helpfully pointed out the sign. I didn't want him to get a ticket. Or crush me with his giant car. But mostly the ticket. His car had Georgia plates in the back and an Ontario plate in the front. Perhaps this was the cause of his confusion.

I've heard that drivers hate it when "bikers" weave in and out of traffic. Well, I wouldn't do so much weaving if they just stopped blocking intersections and bike lanes. I promise. I just don't feel especially compelled to act as if I'm transporting myself in a thousand cubic foot vehicle when I'm not. You chose power steering. I chose being able to go.

At 11th and Rhode Island, I passed a woman on a bike who talked into her cell phone about Dwight Howard. At 11th and Massachusetts, I watched a driver run two red lights, well after they turned red, after almost being right hooked himself by a van turning from the center lane. At 11th and L, I saw a woman in a car curse out a bus driver who stopped her bus's turn to allow an old lady to safely cross the street. At 11th and K, I pulled around in front of that bus. At 11th and New York, I blocked the crosswalk for a moment and I am sorry about that. At 11th and H, I decided that I would take the lane, but then soon abandoned it (around 11th and G) to get around some right turning cars. And 11th and F and 11th and E, there was a tete-a-tete with a taxi twice and I also allowed the driver of a black BMW to pull out of a parking garage in front of me as I waited for the light to change. At 11th and Pennsylvania, I turned left with the realization that all of the drivers I had seen looked fierce and miserable and I wonder if we shouldn't be paternalistic and "war on car"-sy and take away their keys for a while for their own health and well-being. I'm sure this thought makes me smug and self-righteous. At least I'm notworking my way towards an aneurysm from commute-related stress.

Not quite.
At the start of East Capitol, I saw none of than guest-poster Marc on mile 18 of his commute home from Northern Virginia. We rode along together and chatted and it was extraordinarily pleasant and I'll probably see him again at Friday Coffee Club tomorrow.

I rode down Mass on the other side of the park before realizing that I wanted to stop for beer on the way home and I turned north on 15th, crossed Independence and A and stopped on East Capitol at my local corner store. Therein I saw this guy with this backpack (allegedly from his paratrooper grandfather of World War II-World War II vintage): 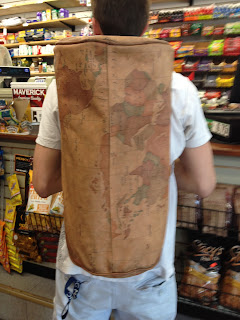 And I saw these chips:

All in all, an exciting trip to the corner store. I biked home ample beer and I'm looking forward to one more day of commuting before a weekend in which I might ride to the suburbs in search of breakfast burritos.