I felt fatigued and this was before I even left. So here are some tips for bike commuting home when very tired:

- Choose your gear wisely. You can ride in a big gear or you can ride in a small gear, but you should never ride in LA Gear, since that's very early 90s and it wasn't especially energy efficient back then.


- Mind over matter. Try to stay out of your own hear. Namely, don't think about how tired you are. Embrace vacuity.

- Stop for snacks. I didn't do this today, but it's always fun to stop for snacks. Like, you could get tacos if there are roadside taco stands. Or maybe you could go into a CVS and clean them out of Sour Patch Kids and then eat all those kids and pucker like nobody's business. Or could maybe buy a Yoohoo because how many excuses do you have as an adult to drink a Yoohoo? "Naw man, I'm just drinking it for the calories. Totally bonking," you'll say as you secretly enjoy the fake chocolate milk before regretting it.

- Listicles are a great way to avoid putting in actual effort into a blog post. But that's neither here nor there. Well, technically, it's here.

I don't understand bus drivers and their relationship to bicyclists. They're an inconsistent bunch. Some are nice and some are downright hostile. I had a guy today who simply tried to ignore the fact that I was in the lane he was trying to merge into and he pulled his (out of service) bus over anyway, so I moved over, but then I got in front of him and then a driver (maybe an off-duty bus driver?) did the same thing and it was frustrating because I felt like the invisible man (Wells, not Ellison) and I'm pretty sure that I'm not invisible.

Saw a guy on a Brompton at Massachusetts and 23rd. That's two Bromptons in two days. Olympic fever (because the Olympics are in England and that's where Bromptons come from, not because there's folding bike diving or something. Though the idea of riding a bike off a springboard would be sort of awesome.)

Q Street to 14th to K Street to 15th. For those of you following along at home, that's me doubling back west one block, perhaps needlessly. Well, not exactly needlessly since 14th street at McPherson Square is one way and the wrong way and that would be a great place for a contraflow cycletrack, so let's make that happen. On 15th street, I saw a Razr Scooter commuter:


If bike lanes are a sign of gentrification (but, no), what would dedicated push scooter lanes symbolize? Presumably apocalypse. 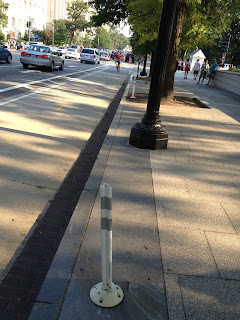 These should be on the street, but they got knocked over and now they're protecting tourists from falling off the sidewalk into the cycle track. Awesome! 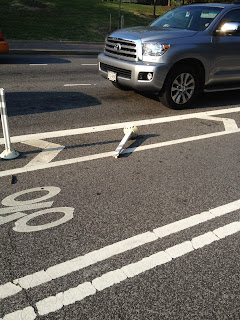 A little later down the road, I saw a Pedicab operator and then I heard him go "uh oh" and then I heard some laughter and I saw that his bike's chain had snapped. This is a picture of his passengers alighting:

Saw a good riding a cool orange bike and I rode behind him for a while and I tried to read the name on the side of his bike to identifying the make and model, but I couldn't do it, in spite of my weaving and I soon realized that he had a rearview mirror and that he probably thought that I was being some kind of jerk and weaving to try to get around him. My bad.

Tourists take Bikeshare everywhere. I cannot even imagine what it's going to be like in NYC. Ten times bigger, I guess. Eventually.

East Capitol to Kentucky to the store and I struggled for a little to figure out what to get for dinner, but it worked out and I rode home and I even mustered some gumption to try to catch the green light at Independence and I didn't even stop to buy a pretzel, but I sort of wanted one.

FCC tomorrow. That's an acronym for Friday Coffee Club. See you there.