How did people bike on bike's that weren't theirs before Bikeshare came around? Did they just steal em? Or maybe "share" them from an unsuspecting out-of-town rube/yokel? Or maybe they just didn't bike to work? I'm personally leaning to they "hey rube, can I "share" your bike?" theory, but science and/or extensive polling would most likely indicate that people just didn't bike when they had left their bike at work the night before and maybe they took another steed from their stable, which is a metaphor for going to work by horse.

I got the last bike.

My key is starting to separate a little, meaning that I'll soon progress to Bikeshare key number 5, I think. Apparently, I'm not gentle enough with my Bikeshare keys. The plastic pieces start to separate or whatever expoxy holds them together starts to undo and then the key has a harder time fitting into the slot and then the key basically becomes inoperable. Not a huge problem when you're not using Bikeshare, but sort of an annoyance when you want to rely on it.

Penn and then 15th. Steel plates, a popular road covering for construction crews engaged in underground activities (like repairing pipes or hunting for mole people), can indeed become quite dangerous for the bicycle-bound. 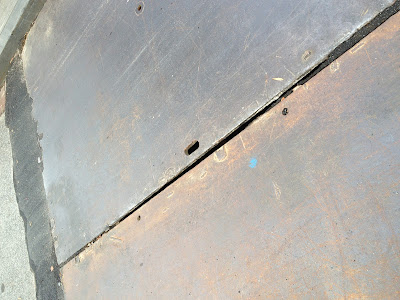 That's a gap between the two plates on the 15th Street cycle track. Joe Skinny-tires (not a real person) could easily see his 700 x 23s caught right in there and down he would go, right into the steel plates (and hopefully not any lower because mole people are merciless captors). This is pretty unacceptable.

I docked briefly at 15th and New York and then set off again up the cycle track towards R street, which I would take across town with many other bicyclists, many of whom wanted to be in more of a hurry than I was. Could we all agree to be a little less "eye of the tiger" during our bike commutes? Maybe a bit more "purr of the kitten"? I have no problem with people who want to ride their bikes fast (sometimes I do, approximately), but I take issue with the I WILL CRUSH YOU vibes floating off many a bike commuter. Vibes float, right? I should check Vibe magazine, which I believe will tell me per its title.

I watched a woman try to turn left from a right hand bike lane, almost turn into a passing driver, stop, try to turn left again and almost do the same thing to another driver. In no way is making a left turn from the far right of bike lane a good idea, nor does it make sense. Don't let bike infrastructure become a gilded cage. These are the Etsy search results for gilded cage.

I turned left on to Connecticut and then rode down to Dupont Circle, where I got the second to last available dock for another redocking prior to riding up the hill. 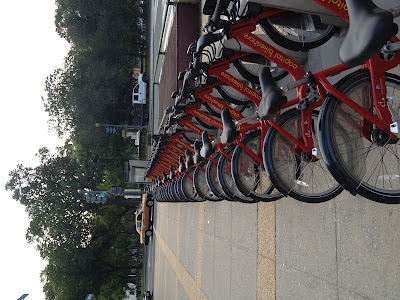 At Sheridan Circle, I got to yell "Stop" at a driver who was about to roll through a yield sign and perhaps get closer to me than I would've preferred. I suppose I should've yelled "Yield" and I'll try to be more accurate next time.

The climb up the hill was fairly daunting on the heavy CaBi, but I passed some dude on a Dahon and screamed "Bromptons rule!" in his face. Ok, I didn't do that. Also, I still don't have my Brompton. If you want one by 2015, you might want to order now. The good people of England were probably just trying to spare my having to ride it in the August heat. Now I will only have positive associations of the bike when I take ownership of it in...September?