Ride In 8/28: Trivium, Quadrivium and 6 credits of electives

So about last night.

I karaoked in a tuxedo. There's video. There might be more (better?) video. There was even supposed to be a second song, but the karaoke meister rejected my Katy Perry request and then it was Carly's 30th birthday party and the place was closing soon and I also sorted of lost all momentum and started getting stage fright/totally and irredeemably sober, so I gave up my spot to Carly and she treated us to a considerably less sober version of a Boy Band hit of the late 90s/early 2000s. Honestly, I think the worst part (and this surprised me) was wearing the tuxedo. I felt very self-conscious. Also, and I had no idea of this ahead of time, the karaoke place happened to be popular with extremely talented and theatrical gay black dudes who simply brought it every single time with every single R&B hit you could imagine. They were awesome and I might go back just to watch them perform, assuming that they're regulars. If they aren't regulars, they should be. I'd like to thank those who attended (I'll withhold their names out of respect, assuming that they'd prefer not to be associated) and I'd especially like to thank Kate for her extraordinarily generous donation to WABA which made this happen.

The next morning, this morning, the bicycling to work thing happened, as it does on most weekdays. It's the first day of school (and the first day of classes at the educational institution at which I work, explaining the relative lateness of this post) and the first day of school brings with a noticeable uptick in car traffic. I'd never begrudge a parent for sending a kid to an "out-of-boundary" school on the other side of town- you do what you think will work best for you and your kid and I get that. It'd be nice though if the money that was spent on gas to drive the kid to school was just given to the local school where the kid could walk or bike. There's no real way to arrange this kind of transfer, I guess.

East Capitol, Pennsylvania, 15th. Lots of bicyclists out, too. All your streets are belong to us.

This is the Treasury Department.

This is where OBAMA is trying to excavate George Washington's secret gold stash to pay for OBAMACARE and sundry other socialisms or maybe it's a tunnel to Mexico for Bill Ayers to use in 2 Fast 2 Furious starring Eric Holder as Vin Diesel. 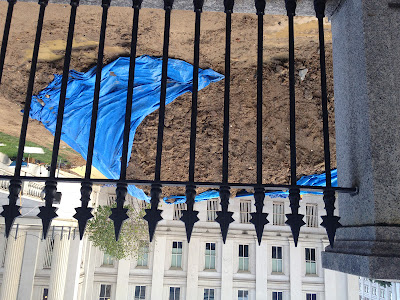 It might just be routine construction, but I've always wanted to create a right-wing internet myth and I figure secret Obamacare gold mine might get the kind of play that would increase page hits on the blog by millions. Tell your crazier relatives!

I'd like to know who the genius is who decided to put a traffic cone in one of the puddles along 15th street. Puddles tend to be pretty visible and bicyclists tend not to need that much further deterrence from riding through them.

Please yield to pedestrians at unsignalized crosswalks. It's the right thing to do.

It's entirely possible that I saw The New Republic's Lydia DePillis at 17th and R.

Shoaling is when another bicyclist rides in front of you when you're stopped at a red light. To the best of my understanding, it's only the case that is a foul when the light is still red. Is there a term for when a bicyclist passes you as soon as the light turns green? Suggestions?

#bikeDC has some pretty impressive calves. It's a well-muscled group out there.

R street to Dupont and I was passed after Connecticut by a guy in an untucked dress shirt who signalled his left turn with a very straight left arm, like he was trying to stiff arm the car next to him. He should win the Heisman for bike commuting, or at least pose for the statue. It seemed very formal and disciplined and I can't help but wonder if he attended some bike traffic class run by strict German people. My hand signals, such as they are, tend to be half-assed. Quelle surprise.

Solid climb up Massachusetts Avenue and then I was the first bike at the rack at work. There's no prize for that. I guess, aside from getting to choose my spot. I chose the same spot I normally do. I've read advice, somewhere, that you should mix up your bike parking location to somehow deter thieves. I'm pretty sure it only matters where you park on the day the thieves try to take your bike and not on all the other days, but maybe I'm wrong. Hopefully not.