Another commute along the National Mall. I've become quite taken with it, at least in the mornings when it's empty. Except for runners. So many runners. People just love running. If you ever feel like a loner or a social outcast or in any way out of the mainstream, my advice is to 1) go to City Sports and buy a branded shirt and 2) run around on the National Mall. Then you'll be just like 10 million other people. Instant assimilation! (Also, if you feel like a loner or an outcast don't expect riding a bike to solve these problems. In many ways, it amplifies them)

Instead of riding on the Rock Creek trail, I decided to cut through Foggy Bottom. 23rd street is essentially terrible, at least until Virginia Avenue. One of the worst side effects about the over-securitization of already lifeless federal buildings is how the street life is deadened even further, allowing city streets to essentially be converted into freeways. Freeways aren't the best for bicycling. I mean, they'd be ok if there weren't speeding cars on them. A bit boring maybe.

I rode through Washington Circle with the intention of taking 23rd street north until I found out that 23rd street becomes one way south at Washington Circle, so I continued on to 24th street, rode through Hotel Alley (what I call 24th street between Pennsylvania and N) and then found myself at 24th and N, which is approximately the way to nowhere. 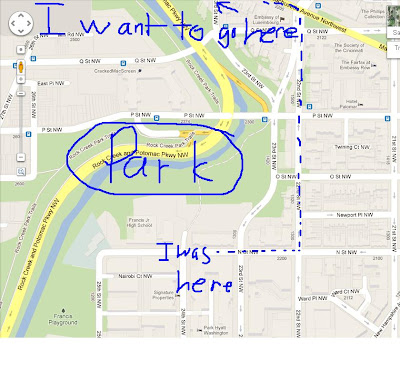 So, if you'd like to ride north to get to Massachusetts Avenue, you can take 22nd Street. Or you can take Wisconsin Avenue. And that's a pretty substantial gap and I had no idea. 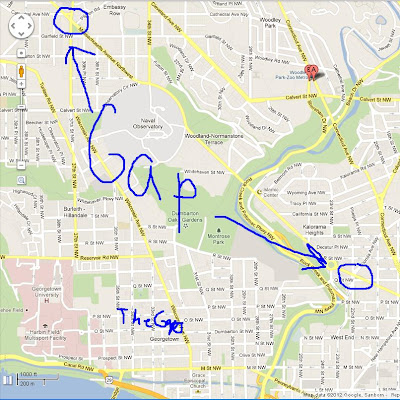 So, there's some public service in case you ever wanted to know about that. You could get to Massachusetts via Observatory Circle, but that's more east-west than north-south.

I'm wrapping up this post now because MY BROMPTON IS HERE and I'd like to go get it. I haven't figured out the best way to get everything home, including the bike I rode in on, but whatever. It'll get sorted out. Or folded out. Or something like that.