Maybe I'm writing a post about two commutes because each ride, so to speak, was similar in that each bike ride was punctuated, or maybe enveloped, a trip on the Metro. Or maybe last night I just got a little lazy and didn't get around to writing and now I'm just pretending that it was always my intention to merge two thematically similar commutes into one larger post. Or maybe, just maybe, it's another reason entirely, one that is neither coherent nor convincing: that the bike internet (aka the velosphere) is running out of room because so many people are writing about their bicycles, their bicycle trips, their genders and their bicycles, their bicycles' gender, their attire, their tires and other topics, which might or might not include drawing pictures, and that each of the world's bike bloggers have been given their allotted number of posts and I don't want to burn through mine so quickly. Or maybe it was just the lazy thing.

Last night's ride started where it always starts, namely my place of employment, which rests atop a hill, under which might or might not live hobbitses. One of the joys of working atop a hill is riding down it at the end of the work day. Even on a folding bicycle, you can achieve a pretty good speed and I've reminded of this by the speed display about one quarter of the way down Massachusetts Avenue. Yesterday, a mobile speed camera (aka one-eyed bandit) was placed underneath the speed display, perhaps in order to catch speeders. While I exceeded the posted 30 miles per hour, I don't think I got my picture taken and I don't think I'll be issued a ticket. Another win for the cycling scofflaws! And how would have they even known where to send the ticket? I mean, aside from the fact that I'm pretty sure I'm the only guy with an arctic blue Brompton and a Sharrows DC button on the flap of his messenger bag. I guess if there's some kind of Special Bike SpeedCam Unit, they'd probably find me out pretty quickly.

I wanted to take the Metro home yesterday, at least for some of the trip, because I wanted to "test" Metro's new policy about folding bicycles. Would it work? Would I be tazed? Would my bike get stolen as I took a series of increasingly close and bizarre pictures of it? Here's my photo essay:

I started my trip at Farragut West. This station is named after Farragut, which is the Celtic word for "faregate," which regulates entrance into and out of the metro stations. These faregates point west, perhaps because of the religious beliefs of the Druids who built the Metro thousands of years ago. NOTE: I didn't major in WMATA History in college, so some of these facts might be slightly off.

I carried the bike to the escalator and rested it in front of me. The bike is a little heavier than I expected, but this might be because I have the upper body strength of pre-spinach Popeye. I made it through the faregate and down to the platform with no problems. I figured my biggest potential antagonist would be the station attendant, but he was probably [insert @unsuckdcmetro tweet here]. 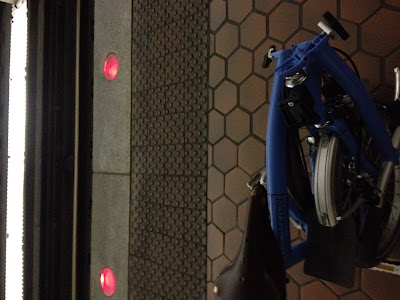 The bike is on the platform. Note how the bike sits safely away from the edge. 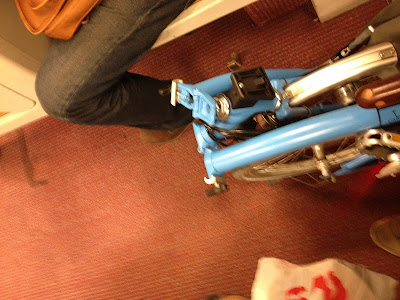 The bike is on the train. I didn't get a seat, but I moved to the very back of the car and stood with my back against the door that led to the train car behind it. I couldn't remember if the door warned me not to lean on it or whether it only warned me not to use it. The Brompton could sit up by itself, but it wobbled a little while the train moved.


The aforementioned wobbling. Yes, I stopped the video right before the bike toppled over and thudded to the guy sitting in the chair next to it. I noticed that he was reading an article which might (but wasn't) about transportation issues. 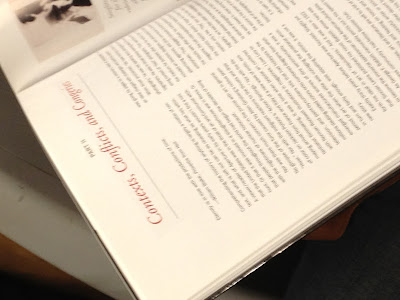 Contexts, Conflicts and Congeries should pretty much be the name of this blog. Or better yet, a much better blog. 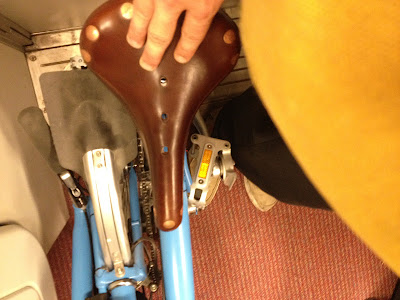 To avoid further issues, namely the bike falling over, I decided to employ this disembodied hand to hold it up. Actually, that's my hand and it's fully bodied (like a red wine?). Those are also my legs and feet. This picture is taken from a very odd angle.

When I left the train car upon arriving at my stop, I got my first "mmm hmmmm" dressing down look from a fellow passenger who seemed mildly miffed. Nonetheless, the trip was a success. 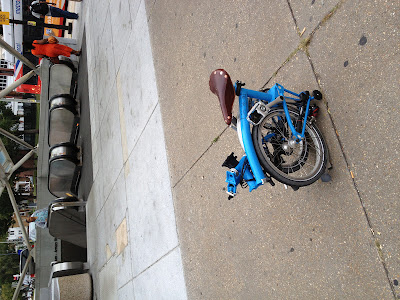 I unfolded the bike and rode down a street (A Street) and was home in three blocks. Then I went to write a blog post, but felt mostly like this:

This morning I awoke early because I had to bring the car to the dealership for an oil change. The dealership is by Potomac Yards in Alexandria and I figured that I should probably drive there (they don't let you bring cars in the Metro yet. War on Cars. Also, there's no metro stop at Potomac Yards yet). I folded up the bike and put it in the trunk. It then took my 25 minutes to drive three miles to the highway on ramp. I found this whole process exasperating and I don't know how people can drive in city traffic every day without going crazy. Or maybe they can't. In all, the trip took me about as long to make by car as it would have by bike. But I would've had no reason to make the trip by bike, so that's a useless measure.

I dropped the car off, unfolded the bike and rode down the Four Mile Run trail to the Mount Vernon Trail. On Four Mile Run, I'm pretty sure I saw a superbiker wearing a team kit with hammers and sickles on the shoulders. Were my life a Rocky movie, this guy would basically be my Ivan Drago. My life is not a Rocky movie.

I had an early work meeting and I didn't know if there'd be enough time to bike the entire trip from the dealership to my office. I decided that I would take the trail to the 14th Street Bridge and ride to a Metro station (I decided a red line station, so as not to have to transfer) and take the Metro the rest of the way to work. This would accomplish the dual goals of 1) avoiding a long uphill slog and 2) testing to see if Metro clemency extended for one more day.

It rained lightly, but I had my new Showers Pass rain jacket. I like it.

I benefited from an over-exuberant fellow bike commuter on the MVT who was pushing himself pretty hard to go fast and I was happy to try to sit on his wheel for the entire time. I was concerned with being late and I rode at a pace that was faster than one I would've normally taken. Nonetheless, the bike ride was great and refreshing after the pain in the ass that is sitting in car traffic. I rode along the tidal basin and crossed Independence to ride up the sidepath parallel to 17th street, sticking to the sidewalk (sorry!) until Farragut North, where I folded the bike once more and took it below. 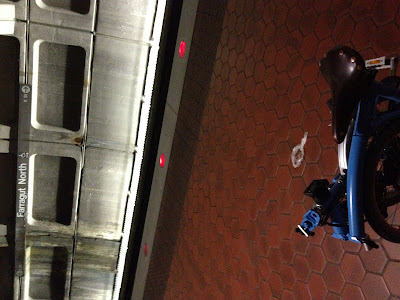 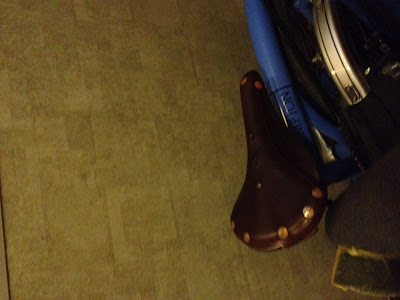 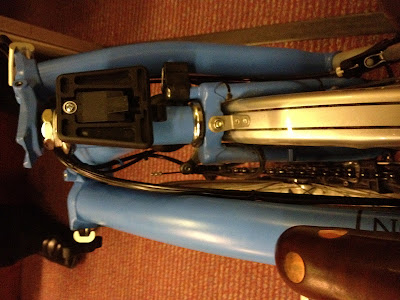 Those are more pictures of the bike on the Metro. No context, conflict or congeries.

I don't know if taking the Metro got me to work any faster than riding would have, but it kept me out of the (very light) rain and allowed me to read stuff on my phone, so those are unalloyed good things, I guess.

I won't admit to thinking "Autobots, transform!" each time I unfold my bike.

I rode down Albemarle Street to 42nd, which has sharrows, but winds about in a way that confuses and misdirects me before I found my way to Nebraska Avenue for the straight shot to work. All in all, a good trip. I think now that I've proven to myself (and others?) that it's possible to bring my bike on the Metro without a bag, I'm happy to not do it again unless it's totally necessary. I think I'd rather just ride, but it's nice, in any case, knowing that it's at least an option.