If you almost take the lane, almost all people won't try to pass you too closely, but, unfortunately, it's not the almost all people that you should be worried about, it's the other people, the ones that don't have the good sense to know that by almost taking the lane you intend to actually take the lane and thereby not get passed too closely. I know the difference between a three foot pass and a two foot pass and a one foot pass and a play action pass and this wasn't a three foot pass and I'm pretty sure there wasn't a fake handoff on the play either. Afterwards, I raised my arm, said "fuck come on" and then I let it go because what's the point because there's no reason to have an altercation and what's done is done. Next time I'll take the lane and ride plumb right smack down the middle. It's the only way. The driver ended up getting backed up in a long line of car traffic and I rode on the sidewalk for a while and then jumped back into the road and I'm sure that I was through Dupont Circle and down 19th before the driver even made it to Florida Avenue. So, so much for that close pass. Really worked out for you.

The reopening of the south entrance to the Dupont Metro has caused a lot more foot traffic on 19th. It's still a desirable route, but you have to pay a little more attention for distracted pedestrians. Non-distracted ones too. It's sort of incumbent on the bicyclist to not hit people. Them's the breaks, so use them brakes.

It makes me really nervous to watch a bicyclist pass a driver on the right, between the car and the curb. That's just right hook city and it scares me to the point of almost wanting to scream "NOOOOOOOO!" and maybe dramatically ride towards them in slow motion. I don't think it's a good idea to pass a driver on the side where he's trying to turn. Just a suggestion.

Some things from the Pennsylvania Avenue cycle track: 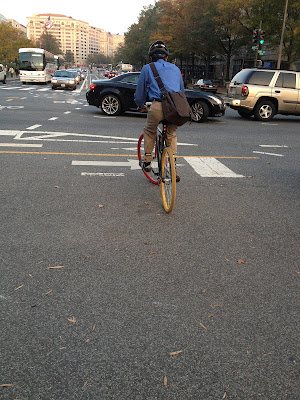 This is a fixie. It has a chainguard. It has one yellow tire and one red tire. It cost $94 and is from buy.com. I can't speak to the quality of the bike, but it seemed to work fine and it's hard to argue with $94. I know all of this because I heard the rider talk to this guy: 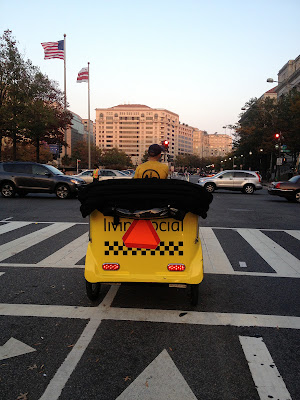 The pedicab driver, who asked where he got the tires. Clearly yellow tires would just complete the pedicab ensemble. 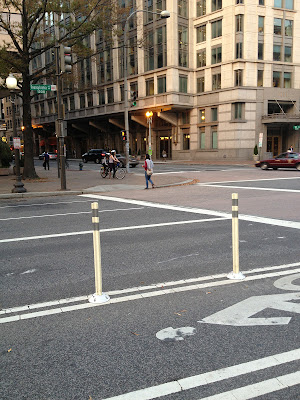 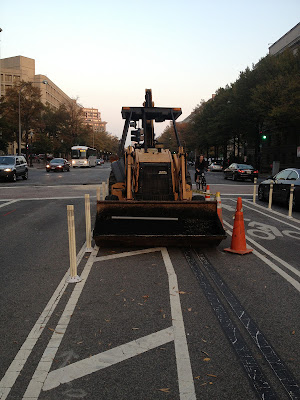 It's not a great idea to use a bike lane as construction equipment parking. I guess they were doing roadwork this morning, but come on. This isn't cool. Someone could get hurt.

At the base of Capitol Hill, I ran into Dave and Kid O and their trip home. Craziness! We rode on down the wrong way of Pennsylvania Avenue/Parking Lot, in the opposite direction of the oncoming traffic, but through the empty parking spots to the left of the roadway. Dave suggested to Kid O that what we doing was wrong, but if we did it slowly, it would be ok. Kid O met him with the rejoinder "or if we do it fast." Kid O has unlocked the fundamental truth of city biking- you can pretty much get away with anything provided you do it slow enough or fast enough.

Another successful hill climb and I fell into line behind some other bike commuters and zoned out for the rest of the trip home. An early day tomorrow for me, but if you're around in the morning, I encourage you to check out the "oh no u don't" #stoputurnsonpenn event. Please tweet about it. I will follow wistfully.