Happy Monday! My commute started with my biking some shoes to a Fedex store. Two pairs of shoes: the ones I was wearing and the ones that were in a box to be shipped back to the online shoe store from whence they came. Were the shoes a Balrog, I was their Gandalf and the Fedex store was the Mines of Moria and the packing tape was, um, I'm not sure and now this whole horrible metaphor fell apart faster than Numenorean society. There was just enough room in the pannier for my work stuff and for the shoe box and I was only slightly overloaded from the time I left home to when I locked up outside the Fedex by the Eastern Market Metro. I parked at the rack out front as a man was getting out of his minivan. Unprompted, he began to tell me about how his wife keeps a bunch of clothes in the car. And also lots of lipstick and a pair a pantyhose. I smiled and nodded and this conversation, unsolicited, continued as we both ended the store. He mumbled a good deal. As a fellow mumbler, I found this to be annoying (I didn't say I wasn't a hypocrite. Or maybe I just mumbled it and you couldn't tell). I didn't have much in the way to offer as far as ripostes go, so I stuck with the smiling and nodding and peppered in a "uh huh" and a "yeah" because, even when confronted with mumbling strangers confronting the idiosyncrasies of their spouses, I think it's important to be an active listener. Perhaps I should be an active ignorer if I don't want this to continue to happen. (Can one even be an active ignorer?)

I freed myself from the burdens of this one-sided conversation after I over-taped the return label onto the box and I bid myself farewell to continue along the way, riding down South Carolina Avenue SE to E Street SE. E Street SE has rumble strips on the street outside of St. Peter School, presumably to alert drivers that they oughtn't run over the children. I think it says a lot about driving that we need to actively engage people with bright signs and rumble strips and speed bumps and other features in order to suggest that they don't hit children with cars. One would think that the desire to not want to hit a child with one's car would be strong enough to suggest caution, but I don't have any children so I'm not really an expert. I guess one could argue that any steps we can take to make our most vulnerable people less likely to be injured is a good thing, but one could also argue that if you're the kind of person who doesn't pay attention or follow the law while driving, you shouldn't drive. Or we could just harp on making children wear helmets all the time and declare our obligation to their safety complete based on our scolding them if they don't. We have lots of options, really.

Women hate sexxxy bike shop employees, so writes friend of the blog Alex Baca. (Why yes, I am wildly misrepresenting her views so you click on the link to read what she actually wrote.)

E Street to South Capitol to Washington Avenue to Independence Avenue to 3rd Street SW, where I rode in the left lane for a good ways before making a left turn down Madison Drive. Madison Drive was the fullest of cyclists I've ever seen, which is to say that there were 4 other cyclists. Madison has two lanes for driving (and two more for parking, sort of. The one on the north side is intermittent) and the lefter lane has the sharrows. This means that if you ride where the sharrows are and a driver wishes to pass you, he will do so from the right, which contradicts good sense and well-established practice. So, if you don't want this, are cyclists expected to move over into the right lane to allow drivers to pass on the left-side and doesn't that defeat the whole point the sharrows? In any case, I rode in the right lane, but this didn't help matters any because then a driver didn't have any free lanes because other people were in the left. Angst ensued. Mostly mine. The driver seemed fine.

I turned onto 14th Street. 14th Street is at least six lanes wide but I bet there isn't any room for bike lanes.

I turned left at Constitution and then crossed that street at the light turned yellow and then red, followed 15th for a long block and then turned into the cycle track. The cycle track runs directly in front of the headquarters of the Department of Veterans Affairs, which I believe is currently being #occupied by a theater troupe that is satirically posing as real Occupy protesters because there's no possible way that a lefty, redistributionist group could ever in all seriousness be protesting socialized benefits provided to ex-government employees, right? Right? I don't get politics.

Running over acorns is awesomely fun. I don't recommend this pastime if you have skinny tires.

Bike-borne parking officer. ALL OF YOUR FEARS/HOPES ABOUT THE WAR ON CARS ARE TRUE.
I think it makes a lot more sense for parking enforcement officers to ride bikes than to drive (given the speed at which they move and the frequency with which they stop) and to the best of my memory, this is the first time I ever recall seeing any parking enforcement being done by bike. Good for DC.

I don't like to be someone who scolds other cyclists. One, because who the hell I am to scold them? (37th most popular DC bike blogger, but that's beside the point) But also, because I don't think it's especially productive. I know that my reflexive response to anyone telling me how to do anything on my bike, whether they're right or wrong, would be the tell them to eat rocks, or something along those lines. I'm just nice like that. So, I never really say anything to people. But here's a suggestion: don't antagonize other people on bikes! What limited about of in-group solidarity there is amongst bicyclists (and there is very little) can dissipate quite quickly.

The Korean Cultural Center, a banner told me, is hosting a group of Korean authors to speak about Korean literature. When writing Korean literature, please remember to consult the Korean Strunk and White and their seminal The Elements of (Gangnam) Style. Tip: When addressing a sexy lady, always use "heyyyyy."

*******************************
One last thing: one of my wife's coworkers had his bike stolen (pictured below). This was on late Friday/early Saturday in Adams Morgan. They cut right through the u-lock. If you're trawling through bike ads on Craig's List, email me (talesfromthesharrows@gmail.com) if you come across anything that looks like a match. It's a brand new bike. Thanks for the help. 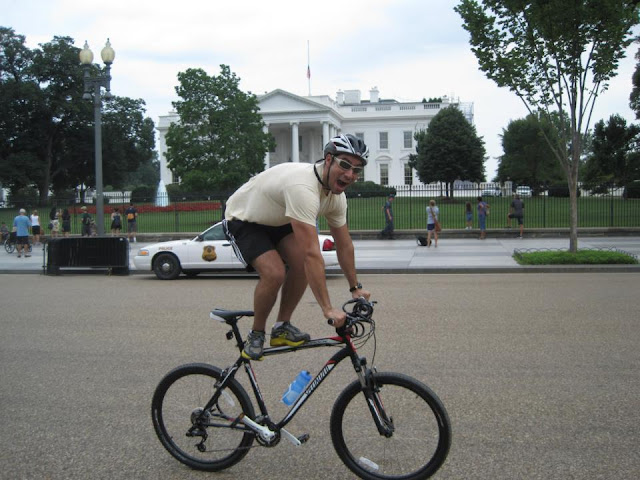