Ride Home 11/1: Dulcinea Sounds Like the Name of a Fancy Non-Dairy Coffee Creamer

Cars are objects. Drivers are people. And somehow the combination of person and BMW always seems to result in the profusion of absurd levels of ridiculous self-centeredness and moderate aggression. Why Bavaria, why? I thought you were the land of fun and pretzels and giant beers. And yet, your primary export seems to be one that increases not the hitch of my lederhosen, but ones that hoists my blood pressure, squeezing my arteries tighter than any leather pants could and twisting my stomach in knots that any pretzel maker would envy. How could this be? Is it my bias that drives the observation- that I've noted close passes by BMW drivers before and then register each subsequent one more fully, while forgiving and excusing the drivers of other makes? Or is it the amalgam of car and driver- namely that the kind of person drawn to the "ultimate driving machine" the one that should be kept as far from it as possible as he will be unable to refrain ultimately driving far too near me? Were I to test drive a BMW, would I become the aggressive lout, the inconsiderate boob, the mann who, when brought to near a gas pedal capable of making an engine make teutonic vrooms, sees the cyclist, pedestrian, grandmother, and/or baby ducks crossing the street as mere obstacles to quenching his unrestrainable desire to turn combustion into forward momentum? Could it be so? Could it?

Mass to 23rd and I repeated the attempt to ride L and it's not yet finished cycle track. Some observations for tonight:


On 15th, I saw Jon. He admitted to not seeing me. I even waved. Still a lot of bike commuters out for a day that was a little colder. Last fall and winter there wasn't nearly as much of a drop-off as there was even the previous fall and winter and this fall and winter I'm expecting even less. It's pretty easy to commute year round by bicycle. Just wear more clothes. It's really as simple as that. 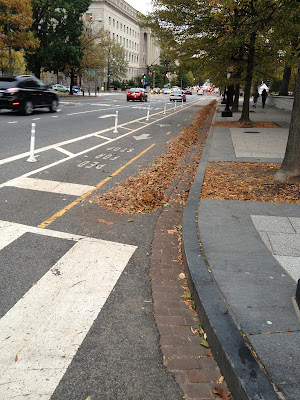 Perhaps it's time for some guerrilla raking. 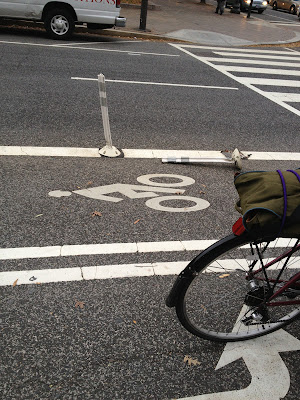 This woman had a great cycling cape. 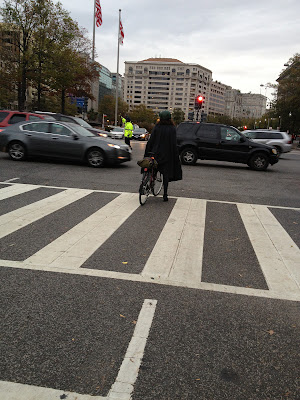 You can't see it that well, but it was dark green and blue tartan. The cycling cape definitely falls into the "more clothes" category, so consider one for your winter cycling needs.

It was a really gorgeous ride down Pennsylvania Avenue and as much as I snark about the u-turns,  it's really a marvelous stretch of road for bicycling. Maybe I snark so much about the u-turns because I want more people to ride it and their (perhaps rightful) concern about safety is what impedes that. Or maybe I just don't want to end up on the hood of a taxi. Either way really.

I like a good tourist photobombing as much as the next guy but not if the next guy has a hipstery ginger mustache and was riding the other way on Penn and saw a guy trying to take a long exposure picture of the Capitol. He crooked his neck, leaned up and gave a goofy smirk. Bravo

I found one of those rhythms riding up the hill when I felt like I was going fast and yet I wasn't winded and that's just sort of the perfect place to be, at least physiologically. It wasn't a bad place to be geographically either since it's quite scenic, especially if you like domes and columns and maybe even pilasters. It was a good ride the rest of the way, excepting yet another BMW and a yellow Volkswagen Bug (seriously, what did I do to the Germans?) and I regret nothing because bike commuting is the worst form of commuting except for all of the other ways to get to work.