I left work when it was fully dark, which I prefer to leaving during the transition from lightness to darkness. I think the call this dusk and when it's windy, it's dusk in the wind. This is not to be confused ducks in the wind, thought ducks in the wind over Kansas are liable to run into the blades of windmills. Or maybe that's the Dutch in the wind. If a Dutchman got stuck in the windmill, he'd be likely to clog the works. The Dutch suffered tulip mania and there are two lips on a duck's bill, whether or not that duck is in the wind or near a windmill, no matter how he wound up there. And no matter how we ended up here, whether you're Dutch or duck, in Kansas or in the wind, please use lights on your bike at night.

No problems on Massachusetts and only a little slow on 23rd, but the real show only starts on L Street when the curtain is raised to reveal within the proscenium plastic bollards and sometimes trucks parked between them and the curb. This was my first ride with the new bollards at the beginning of each block of the cycle track. I think that two bollards at each block might be too many, but it's easy enough to ride through if you're paying a little attention and have some degree of balance and/or depth perception. I suspect that they are meant to be temporary- to help drivers through the learning phase (don't drive here, it's a bike lane) and they'll remove once drivers learn not to do that. So they'll be gone in 5 years.

Here's this from the back:


And from the front: 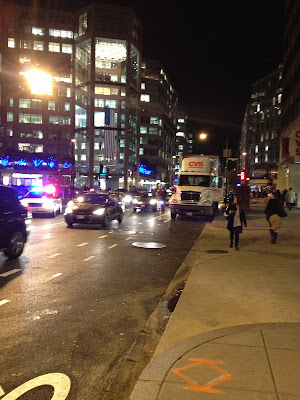 This is by the CVS. When I got there, there were already police present and they were talking to some people and one of the officer's had his notepad out. I stopped and watched what was happening, though my in medias res arrival didn't help my overall clarity of the situation. I asked one of the officers, in my most gee willikers voice, "Are you going to give him a ticket?" and he responded "Sir, we are taking care of the matter." So, maybe? I didn't stick around to find out. In any case, I'm sure that it was the CONFUSION that caused the truck driver to pull into the bike lane, not the WILLFULL IGNORANCE of the fact that the lane is a bike lane now. Here are some thoughts about CONFUSION: if sometimes situations change and you are unable to handle them because of CONFUSION, then perchance you shouldn't be in charge of controlling a two ton machine that can go a mile a minute. And here's something about bike lanes: DC paid money for them. Sure, not a lot compared to other projects, but still, that's some taxpayer funds that went into the project.  Make the bike lanes work- keep people from driving and parking in them- or you're ripping us off.


11th and Penn and up the hill and down East Capitol, where I ran into friend of the blog Kyle, on his way back home astride his Brompton. We stopped and talked for a while and he pointed out how this isn't the kind of thing that happens when you commute by car. Sure, you might see someone and wave or honk, but you probably won't stop in the middle of the road and carry on a 10 minute conversation. Or least, hopefully you won't. That'd probably piss off other drivers.

I didn't take any notes last night to remind myself of any other things to write about, so I'm going declare this post completed and if I remember anything else that happened, I'll just pretend that it will happen in a subsequent ride that I've yet to blog. Also, for the sake of clarity, many events have been omitted and most recurring characters in this blog are composites. Just kidding. Have a great weekend.