Goodbye, November. I don't know how much I'll miss you- depends how bad (read: wet) December will be.

Down New Mexico and up Tunlaw and down Tunlaw and down 37th and across on R Street to 34th and on that street I kept pace with a fancy sports car because spending tens of thousands of dollars on a car doesn't buy you an open road, free of stop signs from block to block. When I think about driving, which I do a lot, I think it's mostly a question of convenience and comfort and not so much a question of speed, at least over shorter and medium distances in urban environments.

No, please don't cut me off by making a sharp left turn directly in front of me.

I followed Wisconsin down to the water and biked along K Street to the Rock Creek trail and I stopped at the Watergate Exxon to take a troll-y #waroncars picture, which was later used (with permission) by the Georgetown Patch. Somebody forgot to tell this guy that the gas station had closed: 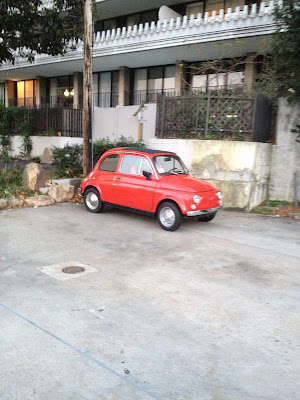 Virginia Avenue and New Hampshire Avenue to the cut-through by the Foggy Bottom Metro entrance and past a bust of George Washington and I began the process of picking the parking meter to which to lock my bike, thinking that I should get one as close to the entrance of the store as possible. I selected one and there was a woman standing in the street and she was wearing an earpiece and then some black SUVs arrived and alighted from it Senate Majority Leader Harry "Harry Reid" Reid. One of the semi-unofficial rules of being a Washingtonian (probably) is to be overall meh about stuff like this because it's not that big of a deal to hobnob with important political people, but I said something along the lines of "Senator Reid" followed by something trite like "Keep up the good work," as Mr. Reid and I have share similar political affinities. He then asked me where I was from and this is where things went a bit off the rails. I started with the default response of "I'm originally from Connecticut" but before I reach the hard c, it dawned on me that I'm from here- Washington DC where I own a home and pay property taxes that are grifted by local politicians I vote for- and I stopped myself and said "I'm from here!" sounding both surprised with myself and rather quite pleased about it. And then my zeal and civic pride carried the following words out of my mouth "If you could give us voting rights...if you could" because when faced with an important political person of considerable political import, I decided that it would be best to address him with the injustice of my national political disenfranchisement. To this, he looked miffed, turned and mumbled "I've always been a supporter of DC statehood" and he walked away and this is why I shouldn't be allowed near important political people. A few things
1) why didn't I suggest statehood? Voting rights is a pretty low opening bid on my part. Not that we were actually negotiating anything.
2) There was a medieval political tradition in which towns basically rejected the suzerainty of the king by essentially holding him hostage until he agreed to certain political and economic rights. Basically, I was channeling this. Live here, shop at our grocery stores, but you're going to have to risk hearing from the townspeople.
3) Here's his back:

I bought bread, bacon and fettuccine. The line moved fast and then I moved fast down to Pennsylvania Avenue and past the White House. Here's the construction: 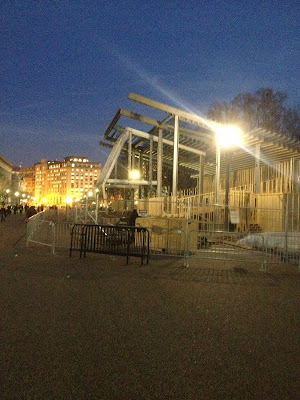 It will be a viewing stand for the inauguration. Currently, it is quite ugly. 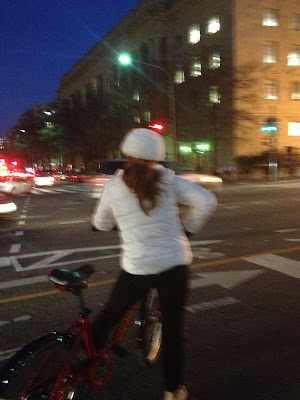 Yes, that's a white fuzzy helmet. It's like Dr. ZhivagoDCgo.

They've repainted the interior white lines of the entire cycle track now. One of the added, and much needed, improvements is dashing the bike lane across the intersection with Constitution where the bike lane jogs to the right. In the previous iteration of the lane, the bike lane just stopped and drivers wouldn't move over enough before the bike lane started again on the other side. These dashes should really help. Good thinking, DDOT!

I rode up the hill and then down East Capitol. About eight blocks into that, a red sedan pulled alongside. A woman with a southern accent (Georgia maybe?) shouted out the window "Sir, you dropped your earmuffs back there." I thanked her. I didn't drop my earmuffs. One of my gloves had fallen out of my pocket. I thanked her and biked back, picked up my glove from the road a block back and then continued home, in possession of two gloves, the way it should be, so one hand doesn't get cold or jealous of the other.