People on foot have it the worst. Sure, bicyclists have it bad, but pedestrians really have it worse. Sometimes I think that if I really wanted to be a better bike advocate, I wouldn't be a bike advocate at all and it'd be much better if I took up the cause of pedestrian rights (and lefts). This is true for a lot of reasons, some of which are philosophical (almost everyone walks) and others of which are tactical (almost everyone walks) and if I formed the Washington Area Walkist Association, it'd be called WAWA and I could also sell sandwiches via a touchscreen mechanism and make all of the money. I think the cause of walkability is also the cause of bikeability in a way that isn't necessarily true in the other direction. So, in conclusion, be nice to pedestrians. All of this is a run up to say that it really cheeses me off when a driver fails to yield at a crosswalk. It'd bad enough that crosswalks confine people to cross the street in places that might not even be that convenient and it's also bad that the amount of time given to getting cars through intersections vastly exceeds the amount of time spent getting walkists across intersections and all of this compounds to something vastly worse when there's an impatient boob in a luxury sedan whipping around a corner and stopping feet from you. Be kind to pedestrians. Drive and bike as if you care.

Mass to 23rd to L. This happened. Then this happened. "That's not what justice is," the colonel jeered, and began pounding the table again with his big fat hand. "That's what Karl Marx is. I'll tell you what justice is. Justice is a knee in the gut from the floor on the chin at night sneaky with a knife brought up down on the magazine of a battleship sandbagged underhanded in the dark without a word of warning." Thanks, DDOT.

Some good stuff from our friends at Washingtonian. I didn't know it was a humor magazine. I'll trade all of the streets with cycle tracks for all the streets without them. Deal or no deal?

This is the end of the L Street Cycle Track. Those are some bike boxes and they prove absolutely useless if there's a green light on L; you cannot stop there.

You end up stopping here, which is on 11th street. You get here by making a leftward button hook, which I was also a move that Samuel Gompers might have used in unionizing textile workers.

Here are some pictures of the driveway near the Capitol about which I wrote this morning: 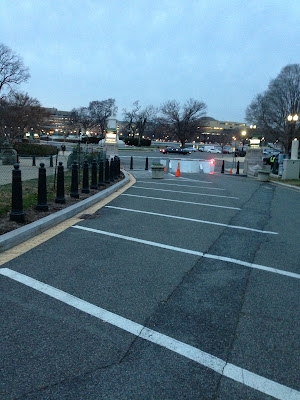 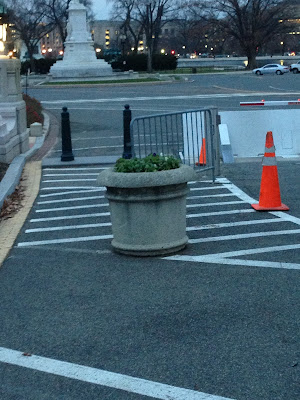 There was a tipped over orange cone in the bike lane on East Capitol in the block with the Supreme Court on one side and the Library of Congress on the other. I asked one of the police officers there if I could move the cone. Normally, I'm a seek forgiveness rather than ask permission kind of guy, but not when it comes to the state security apparatus. He said that I could kick the cone to the curb. I tossed it. He said "thank you, sir." No, no. Thank you, sir.

Two more bike commutes. Next year, I'm going to make a bike commute advent calendar and reward myself with candy. But, really, bike commuting is its own reward. But you'd think that about Christmas too.