Let's see, yesterday, huh. I have some pictures. Maybe I could use those.


This is my hand. It is dirty because at the start of my ride home, I removed some electrical tape that had previously been wound around my left hood (the plastic that covers the top of the brake lever on the handlebars), and this left behind some gunk (technical term) which I promptly managed to transfer to my left hand. It was gross.

On 19th Street, I saw two guys with two service animals. One was exiting a building and the other was walking down the street. And the dogs totally went nuts and start barking and lunging at each other! To the best of my previous knowledge, I didn't know that one of the services a service animal could provide was aggression toward other service animals! It's like the Highlander out there.

Also on L Street, a woman behind me on a Bikeshare bike was asked by a driver or maybe a pedestrian (she was behind me and I don't wear a mirror on my helmet, or in this case, a helmet) asked her about the bike and her response was totally spot-on. It was like she was a Bikeshare plant, or a Plantshare, which is totally different thing for aspiring greenthumbs who don't want plants of their own. She responded, "It's $75 a year and you can take a bike from any of the stations and ride it for free!" That's pretty much the exact summation that I'd want to give: it's cheap and you can get a bike anywhere and bring it anywhere. What's not to like? Hard to argue with cheap and convenient.

When the L Street Cycle Track ends, I implore you to just ride on the sidewalk next to the Edmund Burke pocket park. It's the conservative thing to do, and per Burke himself probably (though he died in advance of the invention of the bicycle, probably), the most reasonable. In an ideal world, should you have to do this? No, probably not. But in choosing between trying to get over three lanes to the right and just riding on the sidewalk for a little and then waiting for the light to change at 11th, I know which one I prefer.

11th to Penn to the Capitol. Here's the picture of the pre-inaugural Capitol that most people would take: 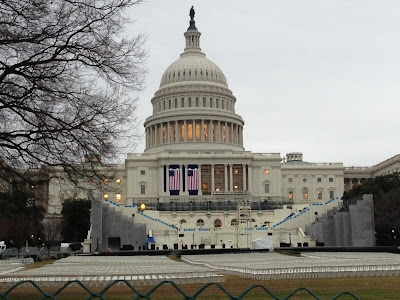 And then, the bicyclist's picture:

I've yet to meet a bicyclist who thinks that any picture isn't vastly improved through the edition of a bicycle. Ask a cyclist to choose between the Mona Lisa versus the Mona Lisa on a Colnago and the latter will win every time. Dogs playing poker versus dogs playing poker while riding tandems? I think you know which one is real art. (neither.)

I biked up the hill and down the street and then last night turned into this morning and this morning was rainy and cold and I rode to work anyway because that's what happens when it's rainy and cold. I was pleasantly surprised to see so many other people out on bikes (though there were some gaps- I'm looking at you R Street from Florida Avenue to 11th! Where were you guys?). If this weather doesn't prove to be a deterrent to people riding to work, not much will. I think bicycle has firmly taken hold and we're not going backward. But, I'm hardly unbiased when it comes to these kinds of things. I used the rainy ride to think about a lot of things, but one of them was the ranking of best personal attributes that should be embodied by bike commuters. I came down to two, patient and empathetic, that I feel are the most important, with forethoughtful as a not-so-distant third. What qualities do you think make for the best bike commuters? And "leggy" is not an acceptable answer.

I rode around Union Station just to savor the new pavement. It looks like the bike lane around Columbus Circle will begin on Massachusetts Avenue, only to be quickly interrupted by a turning lane for drivers looking to get to the parking garages. But it's at least something.

I rode down First NE and almost met the trunk of a car which had been turned by a driver on a red light. It's time to seriously reconsider allowing right turns on red as the default position. Not just because it adversely affected me (though I do have to admit that self-interest plays some role in my thinking), but because it really unfairly and, in my opinion, unsafely affects non-motorized traffic. We can build all the bulbouts and bike lanes we want, but so long as the traffic laws suggest that drivers have priority and need to Go GO GO!, non-cars are at best second-class citizens or maybe third class citizens or maybe citizens who are in steerage, though all of that Irish dancing in Titanic made that look fun, at least until the boat sank.

Braking sure took a while on the wet roads.

One of the bicyclist behaviors I like least is when one cuts off a pedestrian in the middle of the crosswalk in order to roll through a stop sign. "DON'T YOU KNOW THAT YOU'RE GIVING US ALL A BAD NAME?" would be the kind of thing I would say if I thought that was in any way true. What you're doing is being an asshat, so you shouldn't be an asshat.

A bit of the sidewalk in front of the construction site on Massachusetts Avenue had been dug up and replaced with gravel and when I rolled over it and didn't fall down I thought about how awesome at bicycling I am. Anyone (read: not me) can do a gravel century (100 miles on gravel roads), but it takes some real skill and dedication to complete a gravel century of centimeters.