Biked home again tonight. Seems to be a recurring event. I'm afraid I'm addicted and I can't quite shake it. Every morning it's bike to work and every night it's bike back home. It's a vicious cycle, pun intended.

You know the part in the multi-stage thousands-of-mile grand European bicycle racer when all of the professional bicycle riders are like "race race race go go go"? Yeah, bike commutes aren't anything like that. And yet, somehow, bike commuters and/or people who happen to ride bikes for exercise have lately been asked to have opinions about a certain disgraced wheelman, though one mightn't expect the average beltway driver to have thoughts and opinions about the latest NASCAR brouhaha. But, in spite of that, I do have some opinions and I do have some CONFESSIONS of my own. The fact of the matter is this: the success of a certain American bicycle rider stoked my own passion for the enjoyment of bicycling racing, which, eventually translated into my thinking, after many years, that perhaps, I could take to bicycle as a means of getting places and going about town. And, this, after having experienced and subsequently learned of all of the practical and pragmatic reasons for riding a bicycle for normal and everyday purposes, seems quite silly in retrospect, but I cannot now divorce myself from my past, much as I cannot pretend that I didn't have braces on my teeth nor disavow that at some point, but totally not now, I very much enjoyed and was far too emotionally invested in all things Star Wars and Magic: The Gathering. But, Corinthians 13:11 and all that. Do I feel, in any way, that somehow this now sordid history of my relationship to the bicycle-qua-tainted bicycle racing somehow impacts my present? Not especially. But were there no Sociopathic Texan, would I be currently biking to work? I don't know. I'd like to think so. Is this a thing on which I feel is it useful to dwell? Not really. Should it be? I doubt it.

Massachusetts to Connecticut via Dupont Circle. Met a friend at a bar thereabouts, for a well-deserved Friday confabulation. Thereafter, we walked down to Farragut West-abouts and then I kept on down 17th before turning across Pennsylvania in front of the White House. Need to see a picture of from where the President will be watching the not-him parts of the Inaugural Parade?

Need to see a picture of from where our legislature might sow fiscal chaos and crater the global economy? 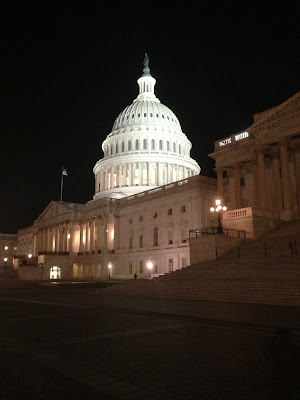 So, there's that, as well. Not much doing between the first thing and the other. Sure am glad there's bike lanes between the two places, though I'm not totally sure that anyone every traveling between the two has ever used them for the purpose of business, but I can pretend. Maybe Mr and Mrs. O (one of whom is now rocking bangs!) will alight from the limousine, stand astride a bicycle, and show to the world something re: America and bicycles. Though I'm not holding my breath. But, yay, bike lanes! So, rest of America, here are some takeaways that Washington, the District of Columbia, would prefer you to glean on Monday:

1. We have bike lanes here.
2. We do not have a real vote in Congress.

So, just keep that in mind. Tell your friends and family. K thnx.

After the hill and the picture-taking, it was an easy and calm ride home and there was little in the way of hassle and that's the way I prefer it. I won't be back to work until Tuesday, so I wish everyone a wonderful extended weekend and all the best in ventures great and small. One million thank yous for reading, distributed evenly across everyone. You're the reason I do it. Thank and the lucre. So much lucre.