Ride In 1/2: The French and Indian Lunch Buffet

According to the calendar-industrial complex, it's a new year. I'm a calendar originalist, so I celebrate Caveman New Year, which takes place in the month of

My left heel repeatedly struck the front edge of my pannier for the first couple blocks of my commute. I think at least one of them grew during the break. All I got for Christmas is localized foot gigantism. Actually, it's because my rear rack, having been chosen for style and not efficacy, causes my pannier to hang slightly too frontwise and I had gotten out of the habit of pedaling in such a way to avoid this. I am now back in the habit.

Very little of note for the first half of the trip. I saw a woman with a green helmet and there was a cop car parked in a bike lane. No u-turns across the Pennsylvania Avenue bike lanes (so that's fixed now, right?) and a noticeable improvement in the strategic placement of horse (I hope) droppings:

I followed a gentleman who passed me in a hurry to ride through a red light along Penn and up 15th before he continued on his way in another direction and I rode through the security bollards to ride to past McPherson Square, where I was shouted to by the probably homeless guy who yells good morning to everyone. Unless there was another young man on a bike, whom I didn't see, I was that guy and I nodded.

Bike traffic on 15th was moderate but leaf traffic was rather immoderate. 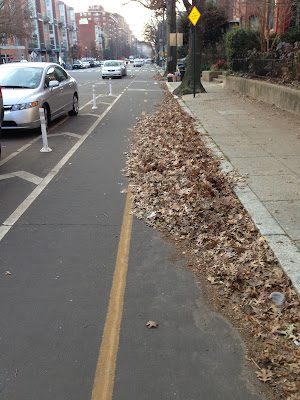 Reminds me of that time when one whole lane that cars use was rendered completely useless through negligence of a completely avoidable street sweeping issue. Oh wait. Excuse my language, but ¿POR QUE TENEMOS BIKE LANES SI NADIE PUEDE USARLOS?
I didn't see anyone on R Street that I'm going to write about. Learned that lesson. Just kidding- I liked HighVizGuy's lesson and I hope to see him again soon. Given his jacket, it will be hard not to.

All was dandy with the bicycling until the riding up hill began and then I was expectedly slow and listless. One of these days, I'm not going to have to ride up a hill to get to work and I'm sure I'll miss it, but until then, I'll just grin and bear it, much as a caveman forefather dealt with saber-tooth tiger attacks. I also might begin to wield an atlatl, though that won't make my ride any easier.

The DC BAC is meeting tonight. I won't be able to attend, but maybe you'd like to go? If you have a New Year's resolution involving civic involvement (which is very DC of you) and you like bikes (which is also pretty DC of you), then this is a good opportunity  to get involved. Ample free (bike) parking.

Thanks for coming back.