Sometimes I wish I used Strava so instead of writing this up, I could just post a map and some stats and be like "See?" But I don't use Strava, mostly because I tend to forget to press the 'go' button or whatever and also because beyond the mapping function, I'm not really interested in how far the ride was or how fast (slow) I rode it. My criteria for bicycle riding is this: did it get me where it needed to get me by roughly when I needed to get there? If yes, then it was a worthwhile enterprise and I am the King of my own self-satisfied Mountain. If not, then my bike probably broke somewhere along the way and I ended up taking the bus, which has its own allure. If you like Strava and maps and data, that's really cool; whatever gets and keeps you on your bike is a thing that I can wholeheartedly endorse (Unless that thing is fleeing from the zombie apocalypse. I do not endorse that). But when I think of Strava, here's what I would see: 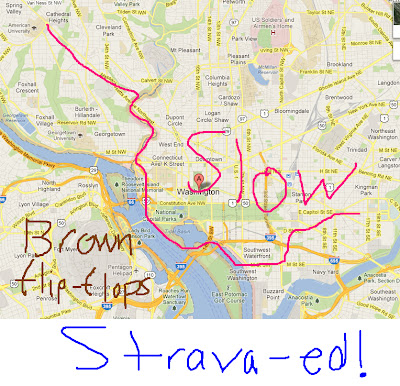 And seeing this twice a day for all of the days I ride to work just doesn't really resonate with me. Except for the 'brown flip-flops' part because I love when my bike data tracking software lobs a diss at our Arlington friends. I'd like to think that if I've learned anything from writing up my daily commute for the past two (!) years (and I really haven't learned anything), it's that a bike ride can be so much more than a map and some squiggly lines and some numbers that don't mean anything and your rankings on "segments" against riders who were probably on mopeds anyway. I think that reducing your rides to those things is a great disservice. If I understood les lieux de memoire better, I'd probably even suggest that has something to do with it. But let's not stop my having no clue what he's talking about prevent me from quoting Nora at length:


Memory and history, far from being synonymous, appear now to be in fundamental opposition. Memory is life, borne by living societies, founded in its name. It remains in permanent evolution, open to the dialectic of remembering and forgetting, unconscious of its successive deformations,  vulnerable to manipulation and appropriation, susceptible to being long dormant and periodically revived. History, on the other hand, is the reconstruction, always problematic and incomplete, of what is no longer. Memory is a perpetually actual phenomenon, a bond tying us to the eternal present; history is a representation of the past. Memory, insofar as it is affective and magical, only accommodates those facts that suit it; it nourishes recollections that may be out of focus or telescopic, global or detached, particular or symbolic- responsible to each avenue of conveyance or phenomenal screen, to every censorship or projection. History, because it is an intellectual and secular production, calls for analysis and criticism. Memory installs remembrance within the sacred; history, always prosaic, releases it again. Memory is blind to all but the group it binds- which is to say, as Maurice Halbswachs has said, that there are as many memories as there are groups, that memory is by nature multiple and yet specific; collective, plural and yet individual. History, on the other hand, belongs to everyone and to no one, whence its claim to universal authority. Memory takes root in the concrete, in spaces, gestures, images and objects; history binds itself strictly to temporal continuities, to progressions and to relations between things. Memory is absolute, while history can only conceive the relative.

It was a quiet ride and I benefit from a clean chain an adjusted fenders and I was free of the noises that my bike makes when it isn't kept up well. I took the southerly route to work, riding down 14th to South Carolina to 11th to L, taking L to South Capitol Street before riding up the sidewalk for a block to wait for the light to change at M. Here's a picture of a church. Is it a lieu de memoire? Maybe? No? Hmm? Just an old-ish church? Is it? Is it really? (Yes).

I followed M to 7th before crossing the street and riding along Water Street, passing the pungent fish market (they only sell pungent fish, apparently), and following the rest of the forever interim Anacostia Riverwalk Trail to Ohio Drive, taking that to the Rock Creek Trail where Ohio Drive stops at Independence Avenue.

There's something about riding opposite the direction of a stream on onrushing car traffic that reminds me of a Star Wars hyperdrive jump. Except the streams of celestrial light are replaced by midsize sedans, which are, admittedly, less impressive.

I stayed on the Rock Creek Park Trail past K Street where I would normally turn, choosing the woods and trail through them over the bustle of the city or the other trail in the woods. I don't ride through Rock Creek very often. I rode past at least one cemetery. There was more bike traffic heading south than north. Near Calvert, where I climbed out of the park, I saw friend of the blog, Jon, also taking advantage of it being a Monday morning to take a longer, more bucolic, ride to work. He looked surprise. To be honest, I didn't expect to be there either.

My legs felt surprisingly good for how onerous the riding up various hills actually felt and I attribute this to my having eaten a biscuit for breakfast. On Garfield Street, someone had taped a handwritten note onto one of those movable flashing construction signs asking why the sign had been there for a month and to whom it belonged. Probably would be more effective to call 311, but snotty handwritten notes are the currency of the realm as far as complainy urban NIMBYs are concerned.

Capital Bikeshare is great, per Slate, which might mean it's not great because Slate is known for its counter-intuitive arguments. Either way, go #bikeDC.