I had to take the dog to the vet this morning (*tP is fine. "An awesome dog" even, according to the vet) and for some reason, in spite of having moved to DC more than a year ago, we still frequent the vet that we used when we were in Arlington. I drove there for an 8 AM appointment and drove home afterwards and the traffic wasn't too bad, but I was still leaving home for work well after the time I normally would. This prompted me to make the decision to take the Brompton and then take the Metro. I take the Metro to save time, but perhaps not in the way that you might think. The trip by solely bike and the trip with bike and train take about the same amount of time. However, splitting the commute and only riding on the flat parts of my route allows me to skip the showering and changing that I normally do when I get to work, thus saving me time and allowing me to go directly to my desk and unsmellingly (not a word?) at that. Sure, I could go to my desk all gross, but I don't especially like being gross at work and also I don't like my office to smell of grossness, which has a way of hanging about in the air.

I rode down Massachusetts Avenue to Union Station to board the Red Line. Along the way, I followed a guy riding a Surly Disc Trucker. The bike was adorned with a honey color Brooks B17 and bamboo fenders from Portland Design Works, along with a sturdy rear rack. I coveted his bike very much, as coveting is the surest sign of displays of affection, though certain deities haven't always proven themselves fond of it and have enshrined their displeasure in tablet form. The next bike I buy (and if you're the Official Wife, I'd like you to just skip this next part and maybe even forgot the beginning of this sentence) wants to be a Surly Disc Trucker, which is the bike that I didn't get when I got the Brompton. The heart wants what it wants, I suppose.

What I've wanted for a while is for DDOT/subcontractors to pave the area around the eastern end of Union Station and it seems like I'm finally getting my wish. If I had a genie, I'd waste all my wishes on minor paving projects. Remember when Captain Tony Nelson did that? Me neither. A bad picture:

This will vastly improve bicyclist quality of life. I don't know if they're going to extend the bike lanes (and I have my doubts) but I'll be happy to no longer experience the boneshaking terribleness of the unpaved roadway on my boneshaker (SFW).

It's very easy to bring the folding bike on to the Metro and it's very easy to sit next to the bike on an uncrowded train. It's less easy to somehow find a way to get your pants dirty with bike gunk because the very design of the bike is supposed to make it difficult, but somehow I found a way. 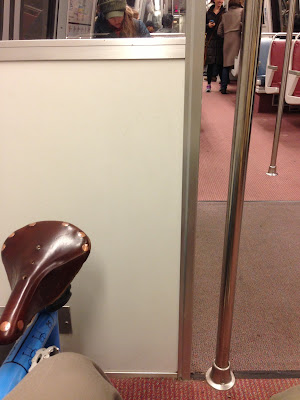 I idled the time on the Metro thinking how nice leather mudflaps would look on the Brompton and how I might as well just set all my money on fire since that would be a more productive use for it.

The escalators at Tenleytown are quite long and my preferred method of dealing with this fact is to stand still and let the escalators escalate me (I'm a good writer) and I put the bike on the step in front of me and it's small enough to allow anyone trying to escalate himself to pass.

The parking on Nebraska Avenue is variable and I was arriving at work late enough that the four travel lanes had converted to two travel lanes and two parking lanes and were the prospect of dooring not so scary, the gap between the parked cars and the white dashes of the other lane would make for a great bike ride and that's where I rode in spite of the fear of dooring. I think that a sensible solution to the dooring problem, and really this is much more sensible than suggesting to all drivers that they pay attention and look around before opening their car doors, is to simply not have driver side doors. Dooring problem eliminated. But you, know sometimes there's a bike lane on the passenger side and maybe we shouldn't have passenger side doors either. So, the most sensible solution I can think of is to have all car occupants enter from the roof, as one might enter a tank or a submarine.

I arrived at work fresh and ready to go and envious of anyone who arrives at work in a presentable manner. You are the real heroes.