The Coveted Tales From The Sharrows Endorsements

*This is not about bicycling, though elements related to bicycling, as local political conditions might influence them, might be mentioned in passing or in some depth.

I was going to write this yesterday, but I'm glad I held off on account of my now having become famous thanks to the good folks at the Washington Post Express, the free metro paper you might know from reading on the Metro or seeing abandoned, strewn on the floor of a bus. If you'd like to read my whole post about how winter needs to go, it's here. I promise to only use my fame for good and not evil, unless of course evil gets me free stuff, such as jet skis. If the good folks at Sea-Doo are reading, I am available for endorsement and/or to star in rocking commercials in which I bad-assedly perform epic jet ski maneuvers then turn to the camera with a toothy grin and say something like "Sea-Doo: it's not just another word for whale poop" or whatever your catch phrase is these days. I also look forward to using my fame to influence the upcoming primary, my endorsements being roughly the equivalent of $668,000 of shadowy illegal cash goodness. I look forward to not being indicted, at least not for this blog post.

First off, I endorse this sandwich:


It's the reuben from Deli City on Bladensburg Road. Really good sandwich. Secondly, I endorse, Deli City getting some proper bike parking: 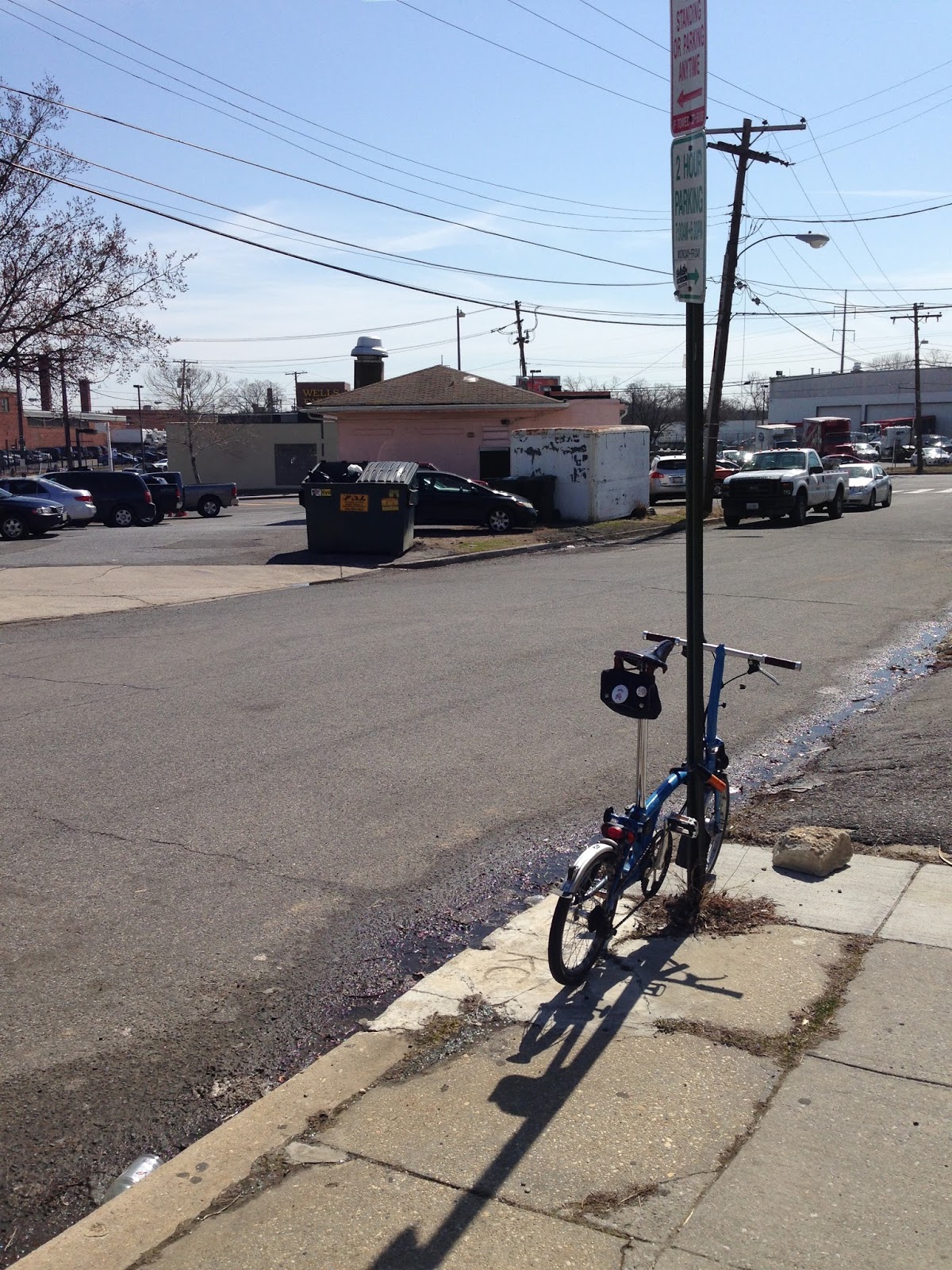 I get the feeling that they don't get a lot of customers arriving by bike. But isn't that the best reason to put some up? Bicyclists love bicycling, but they also love sandwiches, so there's a missed opportunity right there. In spite of having to lock up against that sign across the street (there were some chain link fences closer, but I don't think you're supposed to lock up on those- too easy to cut), I still endorse riding your bike to Deli City and eating one of their sandwiches.

Now onto the political endorsements.

Charles Allen is the Ward 6 candidate who has dedicated the past 10 years to making this place better. He knows the details of the ward inside and out and is intimately acquainted with the interior workings of the Council, the vicissitudes and complications of the Ward's major issues, the challenges faced by all of its residents, the opportunities for positive change, and will be a solid, ethical, progressive voice on a Council that needs more solid, ethical, progressive voices.

His opponent is also a Ward 6 candidate.

It's funny because there's been some scuttlebutt on one of the neighborhood listservs about Charles' role as Tommy Wells' Chief of Staff. When it's mentioned that he's spent all of the time working on behalf of the Ward, the rejoinder was "yeah, but isn't that his job? He's just doing his job." I mean, on one hand, ok, yeah he's doing his job. Why wouldn't you want someone who has successfully worked full-time on behalf of local issues to now take on a bigger and more public role doing the same thing? Seems kinda like a good idea. Secondly, yes, it's his job. He chose it and he stayed in it. He actively chose many years ago to work in DC politics. Working for the residents of Ward 6 isn't some dalliance or stepping stone to a higher office. It's not a step out of line with the trajectory of the rest of his career. He's not running for 'City Council' for any other reason thanto continue the work that he's been engaged with for the past decade and to make this place, the place I happen to live, even better. That's not just experience: it's a statement of values and I think those are values that Ward 6 voters should embrace.

Charles in also endorsed by Washington City Paper, Washington Post, Greater Greater Washington, The Hill is Home and probably would enjoy that reuben, but I don't know for sure his position on that sandwich or any sandwiches really, so I'll have to ask him.

Disclosure: I put together all of these yards signs for Charles last night. This is the only local campaign for which I have volunteered or actually feel very much of a strong preference. It was like 400 signs and took a couple of hours of menial labor. Maybe get one for your yard?

I don't live in Ward 1, but it seems pretty obvious to me that it's time for a change. As much as I enjoy sometimes talking to Jim Graham from the Pennsylvania Avenue cycletrack, me on my bike, him in his VW, I'd be equally happy talking to someone else. Happier even. The qualms about Graham are many and the qualms about Nadeau seem to primarily be made-up and flailing and self-implicating. Here are her positions on transportation and they seem fine. I like what she says about pedestrian safety and market-driven parking options. Anyway, this one seems like a no brainer.

BIKERS SHOULD HAVE LICENSE PLATES AND ROADS THAT ARE TOO NARROW SHOULDN'T HAVE BIKE LANES AND THERE NEEDS TO BE A PLAN TO STOP THOSE HORRIBLE BIKERS FROM TAKING AWAY ALL OF OUR PRECIOUS PARKING AND ALSO THIS ONE TIME THIS BIKER CAME FROM OUT OF NOWHERE AND HE ALMOST MADE ME HIT HIM WITH MY CAR BUT I SLAMMED ON THE BRAKES AND THEN I DIDN'T HIT HIM AND HE WASN'T EVEN GRATEFUL ABOUT THAT AND DIDN'T THANK ME PROFUSELY FOR NOT HITTING HIM AND THAT'S JUST WRONG BECAUSE HE'S SUPPOSED TO SHARE THE ROAD AND HE DOESN'T EVEN HAVE INSURANCE AND MY TAXES GO TO FORT MYER CONSTRUCTION PAVING THE ROAD AND HE DOESN'T EVEN PAY HIS FAIR SHARE AND I'M SO UPSET AND CONFUSED AND ANGRY AND TRY TO PANDER TO AN AUDIENCE THAT THINKS THE BIGGEST PROBLEM IN DC IS THAT SOMETIMES PEOPLE BICYCLE AND WHEN THEY DO SOMETIMES IT FORCES YOU TO HAVE TO SLOW DOWN YOUR CAR FOR A WHOLE 3 SECONDS AND THAT SOMEHOW ALSO TRANSLATES INTO THEM BEING RESPONSIBLE FOR ALL OF THE TRAFFIC IN ALL OF DC EVEN THOUGH ALSO BARELY ANYONE BIKES BUT ALSO THEY'RE EVERYWHERE, AT LEAST EVERYWHERE ON THE SIDEWALK WHEN I'M ON THE SIDEWALK BECAUSE THIS ONE TIME THIS ONE BIKER PASSED ME ON THE SIDEWALK AND I GOT STARTLED- STARTLED!!!- AND THAT'S WHY WE SHOULD HAVE A MORATORIUM ON BIKE LANES EVEN THOUGH THAT WOULD CAUSE MORE PEOPLE TO BIKE ON THE SIDEWALK OR BIKE FARTHER OVER ON THE ROAD, IN WHICH CASE THE SAME PEOPLE WHO COMPLAIN ABOUT BIKES SLOWING DOWN THEIR DRIVING OR STARTLING- STARTLING!!!- THEM ON THE SIDEWALK WOULD ACTUALLY BE PROMOTING THE VERY SAME THINGS THAT THEY'RE CURRENTLY COMPLAINING ABOUT.

You know what, come to think of it, you should vote for either John Settles or Nate Bennett-Fleming. Like everyone else, I can't really decide between the two. I think I'm going to vote for John Settles, with whom I've done business. He tends to be more specific in his answers to questions and I think he's pretty smart on the issues. I like his plan for an urban village at the RFK site, which conforms with my general view that we should just "build more city." [UPDATE: I believe that both John and Nate said some pro-bike things at the Loose Lips debate. John is himself a bicyclist and Nate is arranging a pro-Nate bike ride this Sunday- see comments. Just figured I should mention the bike angle, which I forgot to do initially.] Unfortunately, it looks like Nate and John are going to split the vote in this one and I'll be sure to write you from the gulag when all bicyclists are sent there for re-education and hard labor. This is a good time to mention that I also endorse the The Rent is Too Darn High slate for the DC Democratic State Committee, the organization that sent CM Bonds to the Council in the first place. If for no other reason (though there are probably other reasons), the DCDSC needs a shake-up.

Delegate to the House of Representatives: Tim Krepp

Again, pretty obvious. You might know him as 'man who takes pictures of people peeing in his alley' or as the 'face of the polar vortex' or the author of books about ghosts on Capitol Hill and Georgetown, but I know him as a guy who lives down the street. I can promise you this: Tim Krepp will treat the position of Delegate with the respect and honor it deserves.

I wrote about my ambivalence the other day, so I don't think I'm going to endorse anyone. I think I've firmed up my own decision to vote for Tommy Wells. Maybe it's quixotic, maybe it's not voting strategically, maybe it's ensuring that a candidate who I don't prefer wins. But when you prefer neither of the top two candidates, I don't really want to choose who I don't prefer less, you know? I think the thing that surprises me the most about this election is how Muriel Bowser hasn't won me over the way she's presumably won over so many voters disaffected by Gray. I mean, I've had pretty open mind for the entire primary season and have only just now decided that I'm pulling the lever (touching the screen?) for Wells and I've followed this election pretty closely and in all this time, I really haven't heard anything from Muriel Bowser that made me ever think "you know what, I like this thing that she just said and maybe I should vote for her." But maybe you have or maybe you've decided that she's the most viable non-Gray candidate and her not being Gray (the way Gray wasn't Fenty) is the most crucial factor right now and maybe you've been more persuaded than I am. Or maybe you're more convinced that Gray didn't do anything wrong or has done more things right, on balance, than things wrong and or maybe you're convinced that he's a better mayor than anyone else, allegations be damned, so why not reelect? But when all is said and done, Bowser hasn't convinced me on the positions and Gray hasn't convinced me on character, and the only candidate, even though he will not win, who has won me over on both who he is and what he values is Tommy Wells. I don't think I can endorse him because I feel like you probably shouldn't endorse based on the process of elimination, but he's who I'm going to choose.

The Democratic Primary is April 1.