First Brompton commute in a few weeks. That looked like this:

I've been riding the Ogre almost exclusively and it is about as different from the Brompton as a bike can be. I got used to the folder's handling fairly quickly, but I just think it's sort of weird that DDOT re-installed all the potholes and bumps they took out when I started to ride the Ogre. I mean, I'm not crazy about the outcome, but I'm pretty impressed they were able to get so much work done between yesterday evening and this morning. Speedy!

I saw these girls at Vermont and R: 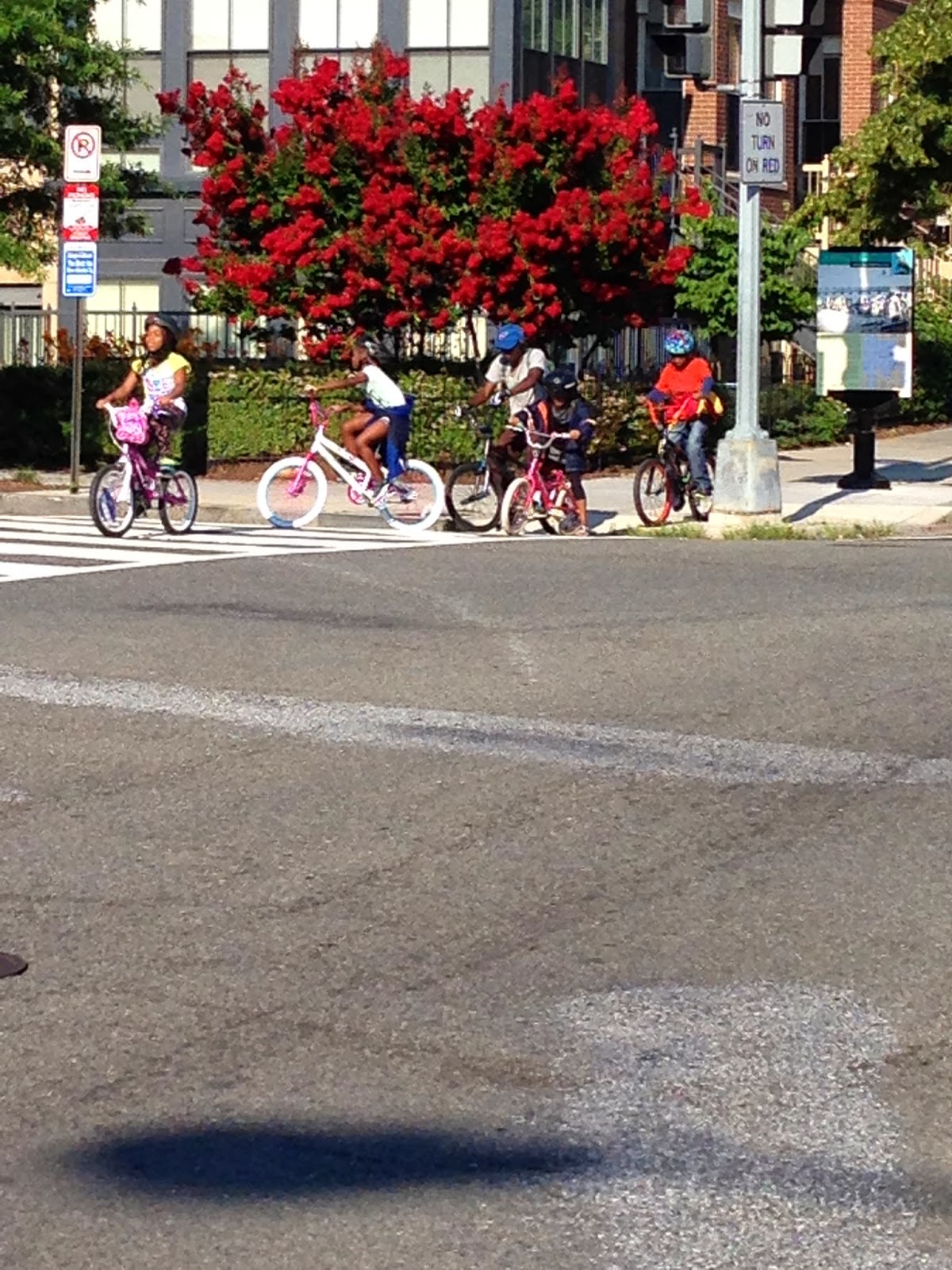 I didn't have the heart to tell them that they're at the center of an increasing #TENSION between cyclists, motorists and pedestrians. It would probably be really dispiriting for them to learn that they're bullies and terrorists. They probably just think that they're little kids innocently riding bikes. To which I'd say "read a newspaper!" (in related news, they seemed kind of adorable)

Per the terms of #kreppmentum2014 and  #sharrowsgimmick2014, I met up with besuited friend of the blog Michael Forster (of the WaPo protest ride) and added one more signature to the ballot bandwagon.

We also had some coffee and a nice talk, so it wasn't all just the shady politics of the smoked-filled rooms of the smoke-free coffee shops of the corridors of power of the avenue of change that is the street numbered 14. But, to be honest, it was mostly machinations as are all conversations in DC as you've doubtlessly learned from true-to-life television programming like House of Cards. Just glad we met at Peregrine and not the Cathedral Heights Metro.

Perfect weather for the ride home. There simply aren't enough of these. I've noticed more bicyclists that usual lately and it's hard to not ascribe this to the weather. Goldilocks weather and the porridge goes down easy. At least until the bears come home. Speaking of bears, I've noticed that drivers with license plates from the non-local jurisdictions tend to do worse around me than those from the states nearby. There's probably a lot of reasons why this might be (general lack of familiarity with the local roads), but instead I'll just decide that bicycle diffusion in the District has given drivers enough experience with driving around cyclists that they've learned to take due good care. Sure, let's go with that.

L Street to 15th to Pennsylvania Avenue, a street some say is moribund. I tend to agree (especially about the street-deadening effects of the J. Edgar Hoover FBI Building), but I think that everyone has misunderstood the whole concept of "America's Main Street." It's actually supposed to be America's Maine Street and thereby cold, distant, and a little alienating. Just kidding, Maine! You're definitely one of Northern New England's top few states! And your lobster is totally a delicious food and treasure and not just a scary looking red sea bug.

I've been meaning to write a post on the fine art of the tourist photo bomb and I should get around to doing that soon. I think in the era of digital cameras (that make phone calls and play Angry Birds) the photo bomb is lower stakes than ever and as a bicyclist who rides through touristy places, you might have a civic duty to try to enhance someone's vacation memory. Anyway, look for that post some week/month soon. I didn't specifically try to ride through anyone's photos of the Capitol today, but I'm not saying that it didn't unintentionally happen. At least I was on a ridiculous looking bike and that'll be something goofy to point out to Grandma when she tells you that she saw the already saw that dome way back during the Truman administration and tells you that it hasn't improved any while yawning at your vacation pics. I do it for the ornery grandmas.