A brief and welcome respite from the summer heat and summer sun. The weather was March-y, but if March weather were put in the microwave for 45 seconds. You can have too much summer and it's nice to have a brief break before August strikes.

Anyone who has bicycled in DC for any amount of time knows to be true that David Plotz put into writing about a year ago: BMW drivers are not the best around bicyclists. As I rode down the hill, my head swiveled to see four BMWs menacingly (?) arranged at the base of the Capitol. And there was a man taking pictures, talking to the cars, beseeching them to look good in the crummy cloudy day.


Either this is a Bavarian motoring enthusiast's idea of "das beste" family vacation ever or this was some kind of weird advertorial photo shoot. As I circled around, I noticed that the license plates said something like "proud to be made in South Carolina." You can tell that a bicyclist didn't write the license plates because then they probably would've said something like "BMWs: Compared to the Civil War, not that bad!"

Not an awful on Pennsylvania and 15th and M, but not a great one either. I saw a bicyclist and a taxi driver and a few police officers and their police car and taxi cab and bicycle gathered by the side of the road by the National Gallery, but I didn't see an ambulance and I didn't stop to inquire as to what that all might've been about. We're someday soon going to get additional barriers along Pennsylvania and if the result of this is fewer u-turns and fewer conversations between bicyclists, drivers and police officers, we'll be the better off for it. Sometimes I wonder if the center-running cycletrack is really worth it and if maybe we'd be better off pushing it off to one side of the other. It might just swap out the u-turns for right- or left-hooks and maybe it'd create fewer conflicts with pedestrians, but there is something really special about riding down the center of a grand avenue with a great view (at least at one end). But would I trade the view for a more functional piece of bike infrastructure? Maybe.

Three feet to pass is a minimum. Just saying.

Ride home was a quiet one with only a few points of interest and inconvenience. One was in the L Street Cycletrack, blocked by a BID pickup, parked by an employee set about the empty trash cans. Honestly, it's kind of hard to get too upset about someone parking close to the trash cans they're about to empty. But, it's equally not great to be allegedly given one lane on one street for comparatively safe travel by bicycle and then forced to vacate it because someone couldn't just park around the corner. 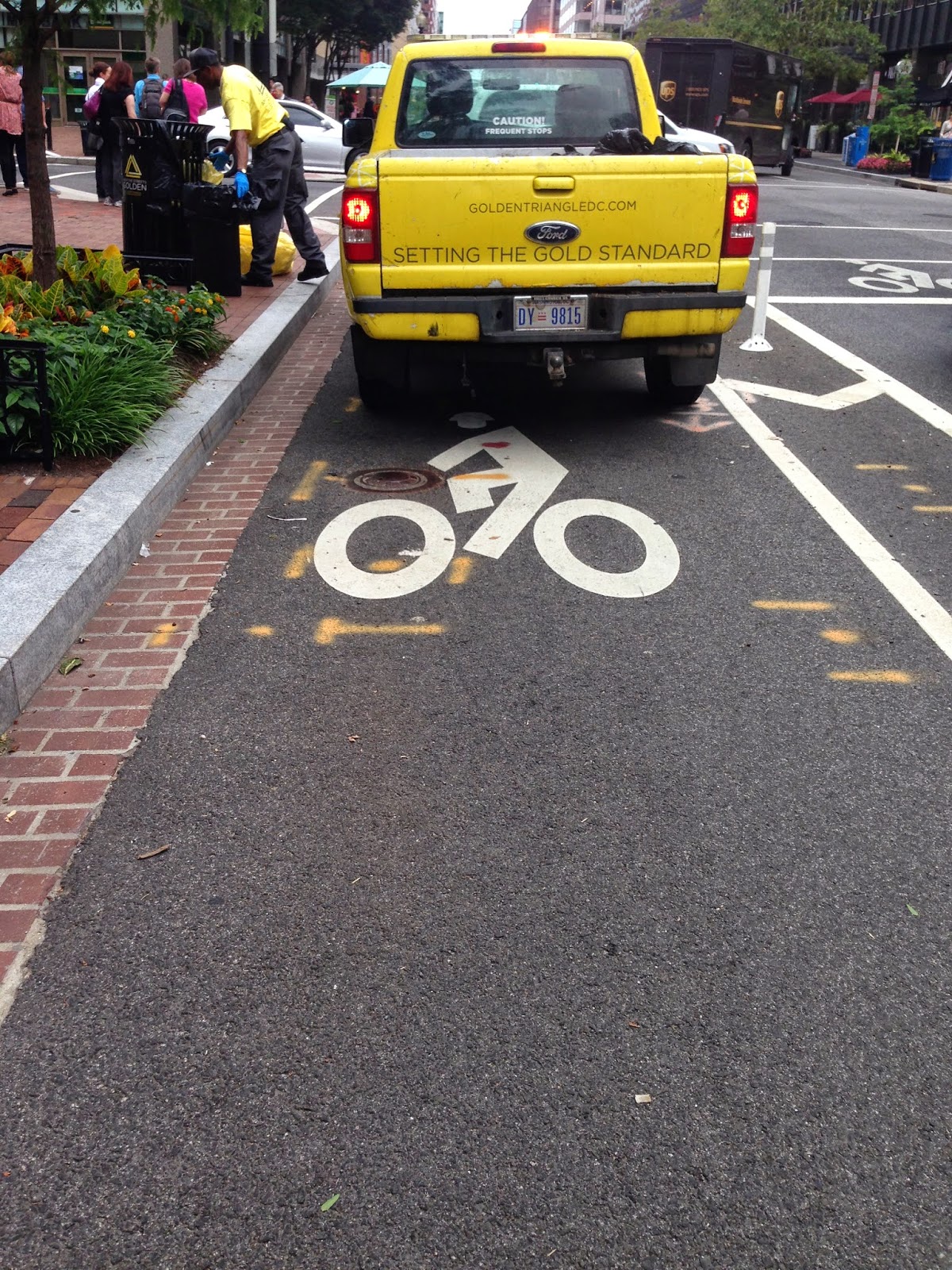 "Setting the gold standard." I'm glad FDR abandoned it. The only thing worse than hard money is running into the back of a hard pickup truck. The Golden Triangle BID is pretty good about bike stuff and this is the first time I've ever had this happen, so it's definitely more an aberration than the (Golden?) rule.

They didn't drop of copies of the newspaper near my office, so I rode an extra block looking to pick up a hard copy of the newspaper that foolishly decided to print what I wrote. I plan to sign a number of copies and hide them around the city. And then I'll tweet clues to their location and people can look for them and then when they find them, they can try to sell these limited edition, autographed copies on eBay or use them to line the bottom of parakeet cages or stuff them in their shoes after a rainstorm. Either way, really. I'm just happy to be providing a useful public service.

14th to I to 15th to Pennsylvania and back home the way I came, almost exactly. On East Capitol, I passed some people on CaBis and the first one yelled back to the next two: "Stay on the inside of the lines!" There was a sense of immediacy, but it's not like the lines are electrocuted or anything. They're just painted white lines. Maybe that's why there was such urgency. They're just white lines.