"That a bike?" is the commonest question I get from strangers when I take the folded Brompton onto the Metro. It's the secondest commonest question I get from strangers generally, the most common being "that a puppy?" about EtP, who is five six and exuberant, but not a puppy. Like the Brompton, she is small, but she doesn't really fold and I'm pretty sure she's not allowed on the Metro. I guess I could buy her an extra-small service animal vest, but it's unclear what service she could plausibly provide. "Oh, yeah, that's my service animal. She, um, helps me, um, pair wines with meals. Yeah, that's totally a justifiable reason to have a service animal. Why I need her on the Metro? Um, maybe we're going to the wine shop in anticipation of a fancy dinner party? Does that sound plausible?" Anyway. Easy bike ride down Massachusetts to Union Station and another easy one down Nebraska to work.

New Mexico to 37th on the way home. On M Street, I watched a guy on a CaBi try to "squeeze" between a Circulator bus and some stopped car traffic. I think we (and by we, I guess I mean bicyclists, but also every other transportationist) need to excise the whole concept of "squeezing" from our transportation lexicon. Simply put, we don't squeeze well. We are not juice boxes. We are not whoopie cushions. We are frightfully rigid. And while we might fit, in the narrowest sense of the term, there's not much too pleasant about it. And the consequences of "squeezing" even when done well is a level of intimacy with our fellow travelers that maybe should've required us to buy them dinner first. And at it's worst? Attempts at squeezery result in collisions and (even at slow speeds) touching yourself or your vehicle to someone else or their vehicle is neither societally acceptable and can (at higher speeds) be really super dangerous. Reconsider the squeeze. 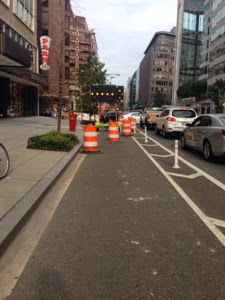 What's the sound of no shoulders shrugging?

Lots of parents and kids on bikes onPennsylvania  Avenue and to be perfectly honest, it's awful. These poor kids are going to grow up thinking that bicycling isn't terrifying and have expectations that accommodations be made for safe cycling. It's gross.

"Tourist family in jorts: German or nein?" isn't likely to be the next big gameshow sensation, but if it were to be, I think I'd like to be a contestant. My guess was "no" but I was willing to be surprised.