One is faced with limited options upon encountering pasta and broken glass strewn about the inside of a bike bag, and even fewer when not armed with a parmesan grater and a comically oversized pepper mill. The scene: 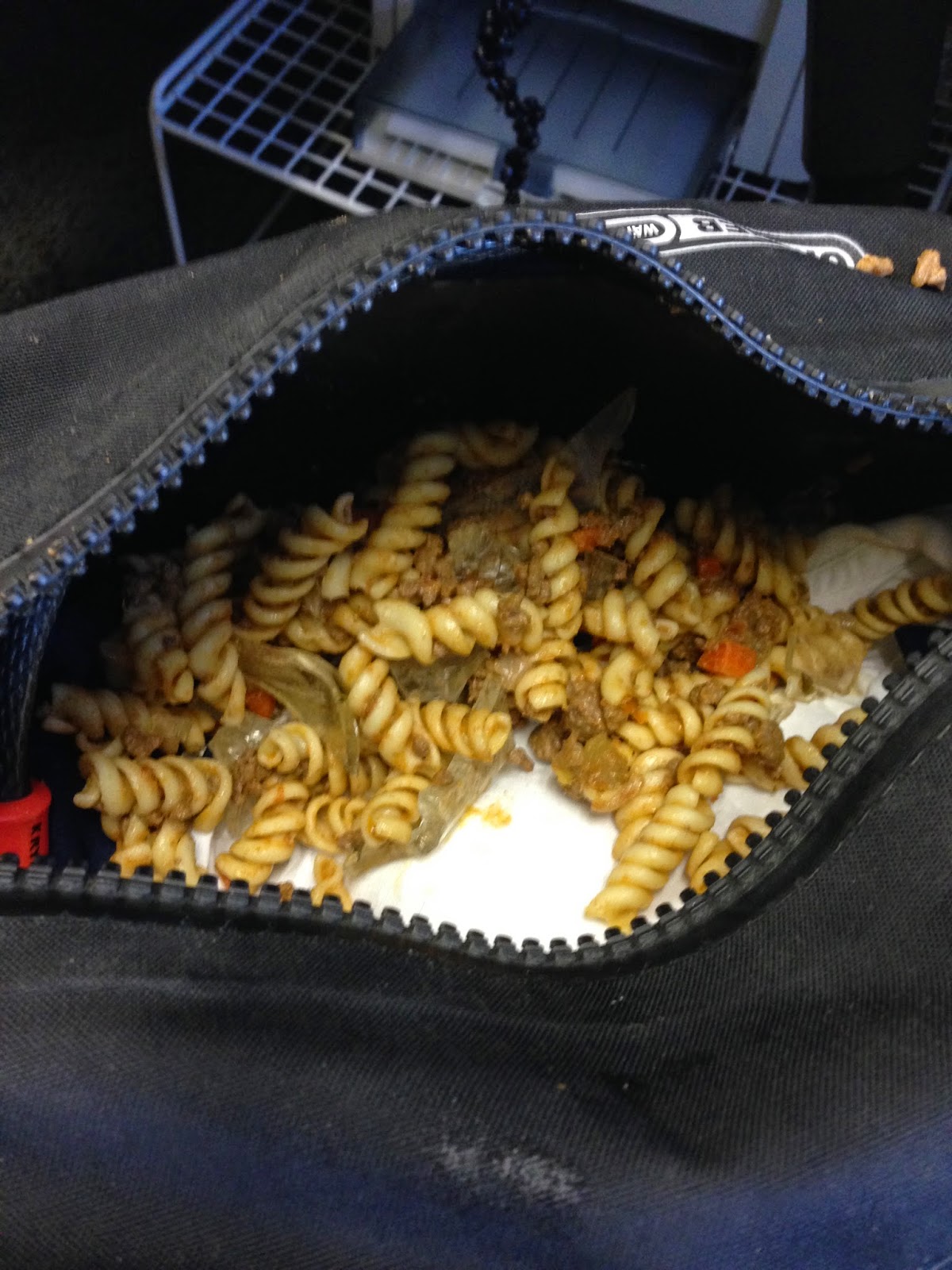 This was the aftermath of a fall earlier in the ride, a fall that I though had solely resulted in minor embarrassment and not a major loss of lunch and the besaucement of what I had planned to wear to work. At a red light on Pennsylvania, I had realized that I had strayed too far into the crosswalk and as I tried to scoot myself backward, I lost my balance and down I went. I laughed. It was kinda funny. Slow motion falling down on your bike bears virtually no resemblance to slow motion as depicted in Brian DePalma or John Woo movies. It's undramatic. I didn't realize at then that the fall liberated my rotini. In fact, it was hours after the discovery of my pasta mishap that I recalled my falling down again (prior to getting to work, I told some people about it, laughed and promptly forgot) and finally put it all together. Initially, I had thought it was my u-lock, also in the bag, that broke the container after riding over a pothole. That seemed dubious at the time, but it was my working theory for a number of hours. Anyway, think twice about the following things:

I think this is the first time in years of bike commuting that I've dirtied work clothes with food, much preferring to soil them with coffee. That's just so much more efficient. Ultimately, this really wasn't the biggest deal. I was able to get most of the glass and food out of the bag fairly easily and had a back-up shirt in the office ["in case of emergency break glass" is more like "in case of broken glass energency"] and had yet another "funny" happening in my bike commuting life to turn into a blog post. If next week's posts are lean, I'm thinking about "unintentionally" exploding something with a cream sauce. You don't get to be DC's 37th most popular bike commute blogger without resorting to gimmicks occasionally. That's just the biz. You can either try to consistently write something interesting or spill your lunch with hilarious results. BRB- gotta stir my bolognese.

Friday's commute, aside from the falling down part and the pasta surprise, was one that I shared for a small part with friend-of-the-blog Rudi, who was off his bike due to injury for a long while, but now back and we rode G to Virginia Ave and up through Georgetown to around Wisconsin. It's been a long recovery for him and it's no small joy to see that he's riding again. I don't know how well I would cope if injury kept me away from bike commuting for a prolonged amount of time, but I can tell you one thing: it'd be good for my glassware budget.

Riding home was probably fine. I can't really remember any details, salient or otherwise. Oh yeah, I stopped at the bike shop and looked around for a little while and bought a bike tool that I needed (a spaghetti strainer) and some new brake pads and I rode home on E Street past The United States Tax Court, which is probably just like the 80s sitcom Neight a Court except during the day and only about tax law issues and maybe without as much Markie Post, but I haven't checked her IMDB or anything, so maybe she's some kind of Tax Judge now, so who knows really.