First attempt at riding the bike I rode last week on the day I fell down and broke the glass container holding my pasta lunch and again today I brought with me a glass container full of lunch BECAUSE I LEARN NOTHING. Luckily, gravity was on my side (or at least not maliciously against me) and I didn't fall down for the entire trip. Score one for never learning for mistakes.
FYI: The Bike Rack at 14th and Q opens at 8 AM on weekdays. I mention this because sometimes you need to go to a bike shop earlier in the morning and it's significantly better to go to one that's open than to one where you fruitlessly pound your first on a locked glass door, cursing life and fate and bicycles. I've availed myself of their services a number of times and they're always quite pleasant and pretty quick too.
[I bring this up because I wrote a thing in WCP this week for their etiquette issue about "how to ride a bike" and it's not just all "put your lips together and blow," but also contains suggestions like supporting your local bike shops. Also, support your local cheesemongers. Ideally, you could support a bike shop that is also a high-end cheese shop, but DC still has some dignity left and this yet isn't a thing.]
First time on R Street in a long time. Check out this pace line: 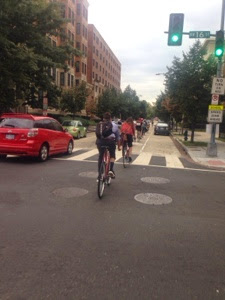 I count 8, then me. Not bad at all.
Got passed by a woman on a singlespeed riding up Massachesetts and then we both got passed by a guy on an eBike. At the light up the way, the singlespeed rider and I talked about the relative unfairness of this, but we also talked about cyclocross (she races it, I vaguely know what it is) and then we parted ways. Making bike friends is hard, but making bike acquaintances is the best.
I never think there's much difference in ease/speed between the Ogre and the Cross Check, but there is and I shouldn't be in so much denial about it. It's ok. I notice it the most when riding uphill, which, SPOILER ALERT, is not as trying on the lighter bike. If only they had a Nobel Prize in drawing obvious conclusions. Maybe the bike is lighter because of some kind of boson. You think we could use the Large Hadron Collider as a velodrome in the particle physics off-season? I hope so.
I took L Street to the end of the L Street cycletrack and worked my way over to K and then up 6th eventually and to Union Market, where there are sandwiches. I biked those sandwiches home, slung over a brake hood, danglingly perilously close to my front wheel, one pothole or sudden turn from a ripped paper bag and meatballs cut into pieces by a cruel turn of the spokes. I live dangerously.