1. It's the first day with the first night when it's dark in the evening commute and it's also the first night I've ridden with my new SUPER BRIGHT super light (Urban 650) front light from Light & Motion, which did prove to be super bright. I saw very few lightless cyclists, which is good, but would have I even seen them anyway? Anyway, if you're a lightless cyclist and need lights, please email me at talesfromthesharrows@gmail.com and I will secure you lights. Will my doing this involve some kind of high-stakes bank robbery with subterfuge and Matt Damon? Maybe! Or, it might involve other means (such as robbing Matt Damn, then using his loot to buy lights at a bike shop. Hope Matt Damon carries cash. I mean, nothing against Damon. We find Clooney or Elliot Gould or Brad Pitt or approximately 7-9 other celebrities, then we're not picky. You need lights. We're gonna do what we need to do. Speaking of lights:

2. It's the WABA Bike Ambassadors!

I don't offer see the Bike Ambassadors up in the neck of the woods (literal woods) near where I work. This might be because Ward 3 does not have diplomatic relations with Bikeistan, but I guess there's some kind of detente, because there they were. [Do bike ambassadors need Senate confirmation?] When I came upon them, they were literally (literally!) standing next to a car crash. A driver tried to 'squeeze' past another in a lane that didn't have enough room for squeezing or so Bike Ambassador (His Excellency?) Jon told me, denying that he and Bike Ambassador (Her Excellency?) Sarah had absolutely nothing to do with it and it certainly wasn't part of their orders from the Bike Lobby to ride behind enemy lines and cause car mayhem in the everlasting and ever-escalating totally real War on Cars. They claimed to be there just to hand out bike stuff and to encourage drivers to turn on their lights. Sure........ We talked a little and Sarah rode the Ogre a little and then I went home via the normal ways I go home, including past thing 3, which is that

3. The Capitol Dome is nearly fully covered in scaffolding. 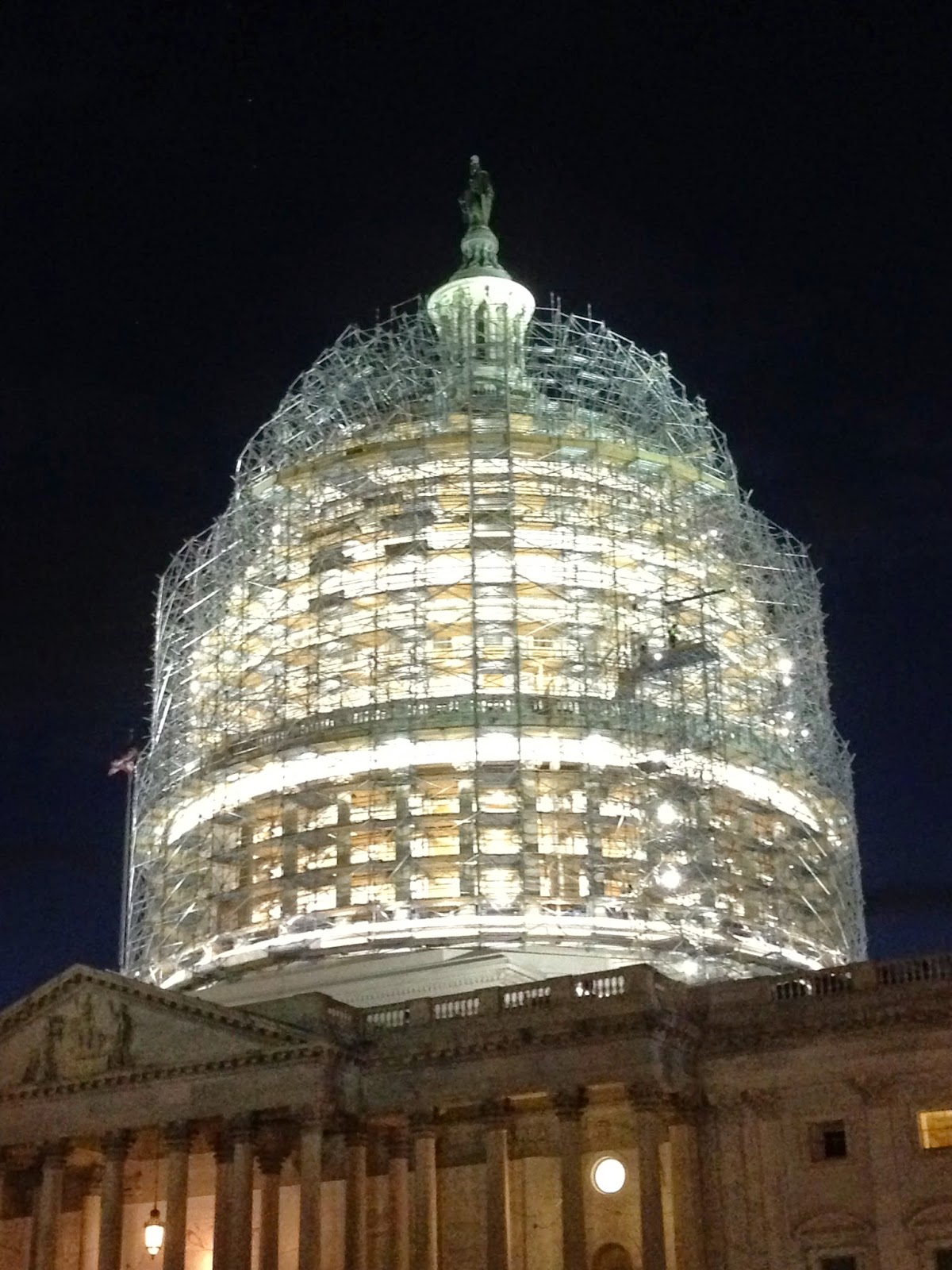 They say the scaffolding is up because they're fixing it, but if anyone sees Damon, Clooney, Pitt and approximately 8-11 (how many of those movies did they make?) movie stars around, it's probably related to an elaborate scheme to steal the Freedom Statue. That's why we need to strike first! To save freedom! And also to buy you some lights if you need lights! With their ill-gotten celebrity cash!

4. There is no segue, but I wore skeleton gloves this morning. I'd've worn them before Halloween but it wasn't cold enough when they were thematically appropriate. 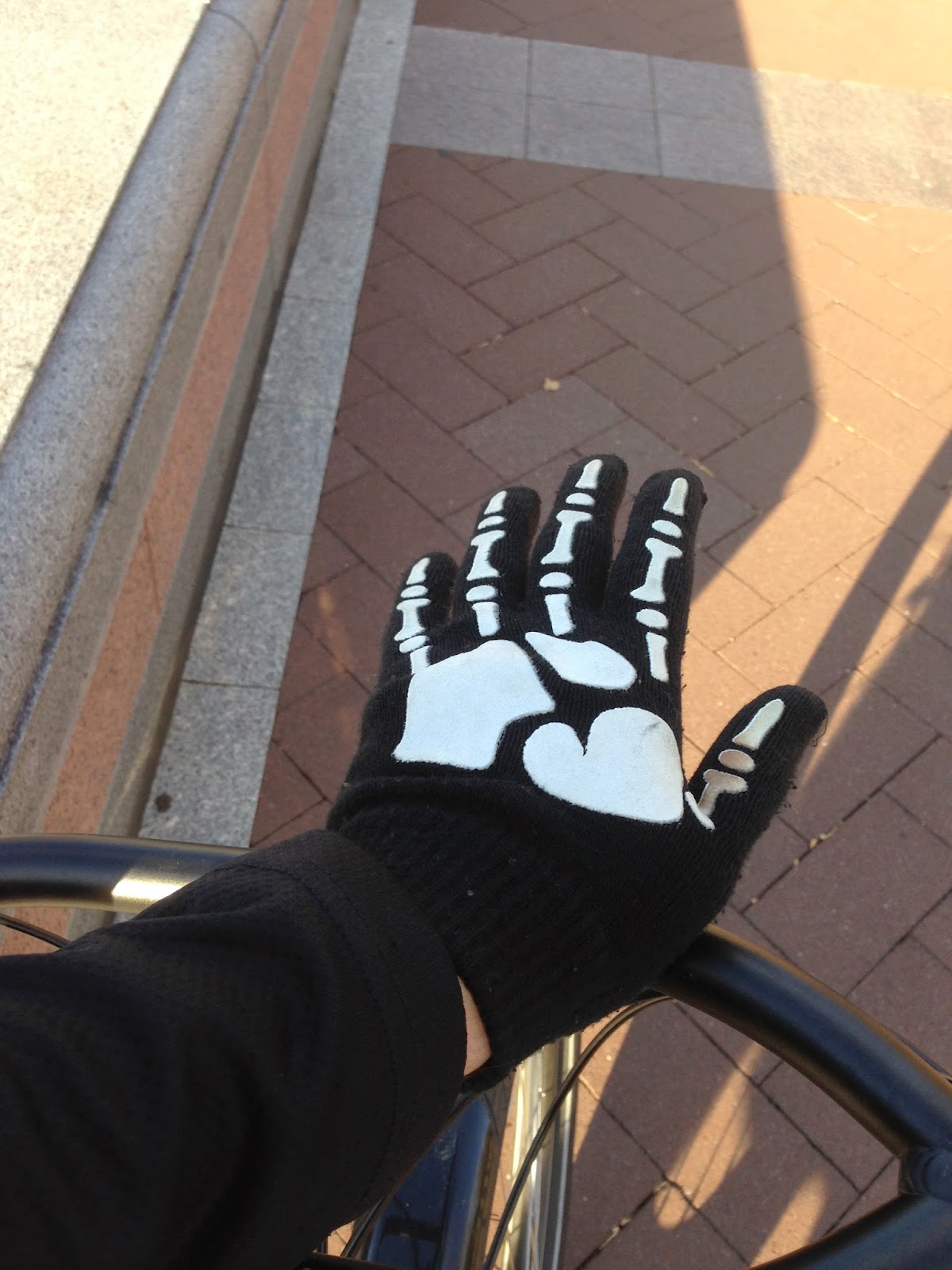 It was barely cold enough this morning, but it'll get colder. I like wearing skeleton gloves a lot because they keep my hands warm, but also because they're hilarious and they remind me to not take myself too seriously. (You could probably also make some danse macabre inferences, but you don't have to and maybe shouldn't). It's important not to take yourself seriously because sometimes dumb things happen, such as

5. A guy riding a Bikeshare decided to make a left turn against the red light from M Street to salmon southbound  onto Wisconsin and this would have been fine and all had he not been heading directly at me, albeit slowly and wobbly. I had just begun pedaling at the green, so I hadn't exactly achieved much momentum either, so I stopped and looked at him, mostly befuddled at what his plan was and why he felt it necessary to involve nearly crashing into me in it. I stopped and tilted my head. He eventually braked. He said 'sorry' and I said 'that was ill-advised,' mostly because it was really ill-advised. You shouldn't make a left turn against a red light and ride directly into oncoming traffic. I would not advise this! And I'm a bike advice columnist and I advise all sorts of terrible things! I guess I could've, in place of saying that his maneuver was ill-advised, laid into him calling him a motherfucking asshole fuckface jackass or something along those lines (as he very much was), but somewhere along the way I think I accidentally came to the realization that we aren't always our best selves. I think this guy knew that. I don't think my cursing him out would've made him known it better. I like to let bike commuting try to develop my capacity for patience rather than let it erode it. I think that's the better choice.