It so happens that sometimes you find yourself in Arlington. This is in spite of not having any business there, nor it being in any way upon your route. But if you're there, and you haven't yet made it to where you're going, then it's on your route and so there I was this morning, having found myself on the wrong side of the Memorial Bridge and no good way to cross the car spigot that the bridge is in the morning. Instead of crossing the traffic, I crossed the bridge and then it was the Mount Vernon Trail to Rosslyn and over another bridge to get back to the District of Columbia, where both was the start and would be the finish of my ride.

35th street from M to Prospect is a one block stretch of uphill. There's a sidewalk, but I rode on the street, which is composed of sharp (but not really) cobbles. When I lived in Arlington and commuted to work, I would ride up 35th street everyday, but on the smooth sidewalk, and not on the cobbles. In hindsight, it's hard to imagine that I managed to do this, at the hill is a sharp nettle of a hill and your legs feel nettle-stung by the time you get to the top, even though it's just a block.

The rest of the way through Georgetown, Burleith, and Glover Park were slow-going.

I know most of the ways home from work, as I've worked at my work as long nearly as long as I've lived in DC this go-round and since I've nearly bike commuted the whole time I've worked at my work, I've approached and left the office from a plenitude of angles, though never from above, as I ride a bicycle and not in a zeppelin. For now, at least. The back way, as I call it, is the way to the Capital Crescent Trail and it's a way that takes me in the opposite direction from the most direct direction home, and normally that means a trip down Loughboro Road past Arizona and over to either Macomb Street or another street and then across MacArthur and eventually down to the trail. This is the way I normally go when I go this way. But today, I took a different route, down Chain Bridge Road NW. Chain Bridge Road is neither a chain, nor a bridge, but it's a road. It's also a remarkable hill and there are some remarkable homes built along the street and I look forward to paying more attention to them tomorrow, when I attempt to ride up the hill. For the purposes of balance (or dualism?), you should never experience a hill only going down. That doesn't seem very sporting. So tomorrow, I'll negate the descent with a mad scrambling ascent that will be strenuous and pointless and fantastic.

The Capital Crescent Trail to the sidewalk on Canal Road and back into Arlington and past the bike-counter and the big map for cyclists to use to navigate the Arlington Loop, which is also the name of a the tool used by all Northern Virginian gemologists.

From thereabouts, it was over another bridge and that looked like this: 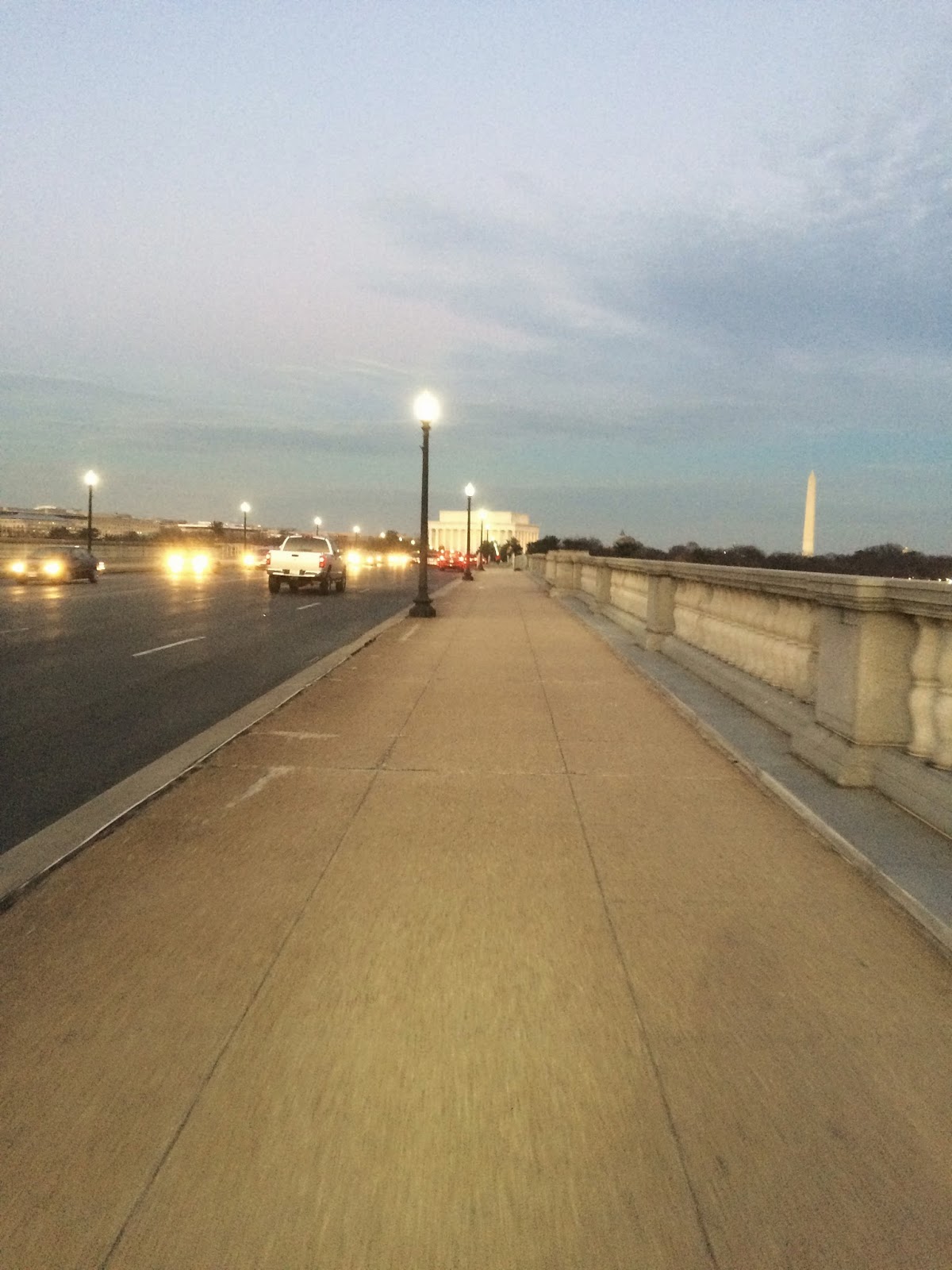 Then it was a ride along the Mall and a bunch of us on bikes bunched at stop lights and rode alone together along the Mall, first on paths and then on the road, which was mostly empty. They rode faster than I did as I was distracted by trying to get the lining back in my glove. It's a disconcerting thing to ride without gloves in the cold and it was equally disconcerting to ride with one glove on and one glove half on. Maybe I should invest in mittens.