Snowed this morning and they delayed the start of the work day, but by the time I left, after the first two blocks of my road, the roads were a little wet, but not in any way snowy. There was snow on the paths by the Washington Monument, but the NPS cleared the path by the World Ward II Memorial and I thought 'great! The Park Service is finally getting the hang of clearing snow. They were able to successfully dispatch one inch of fluffy stuff!" And then Rock Creek. 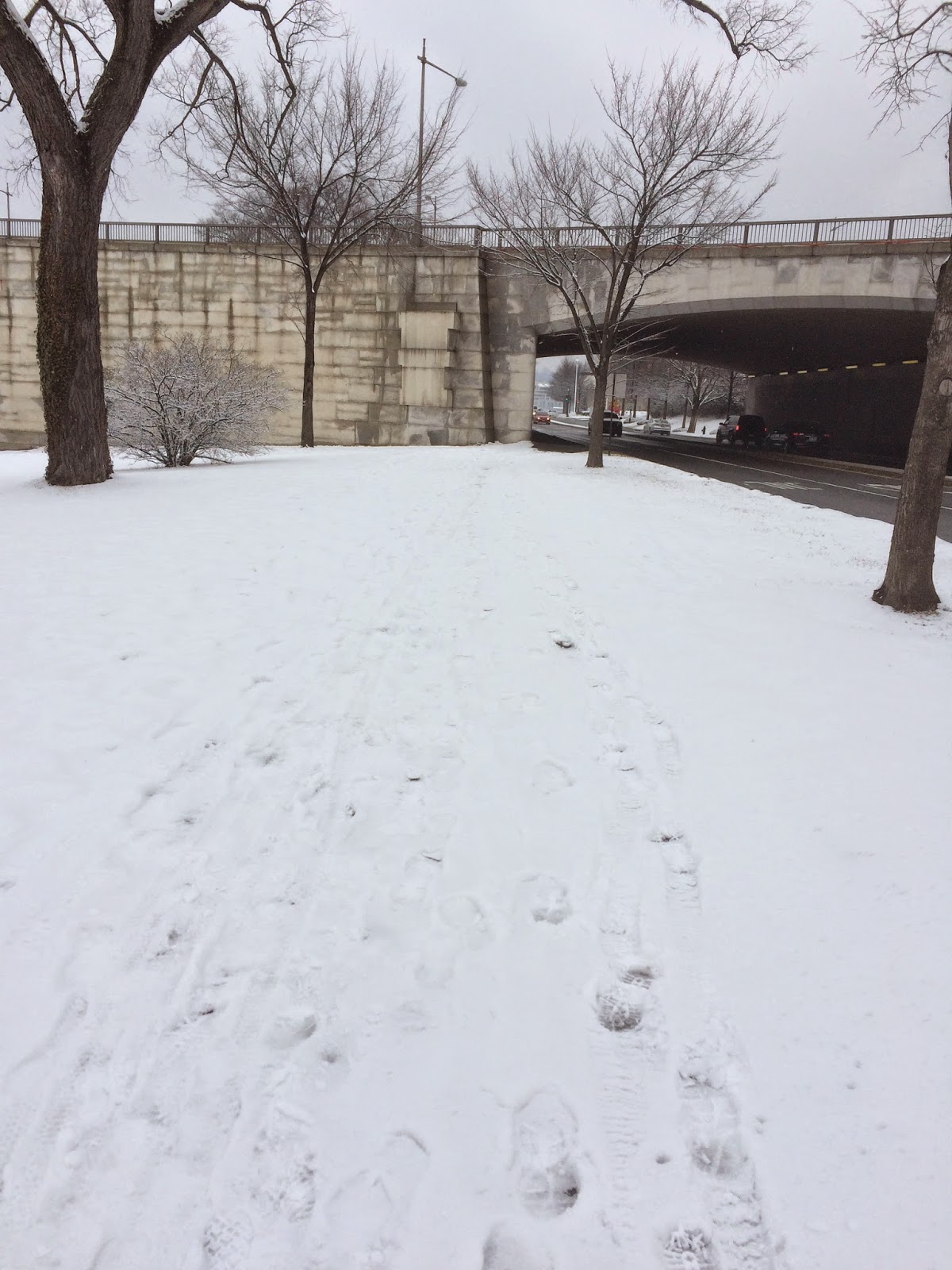 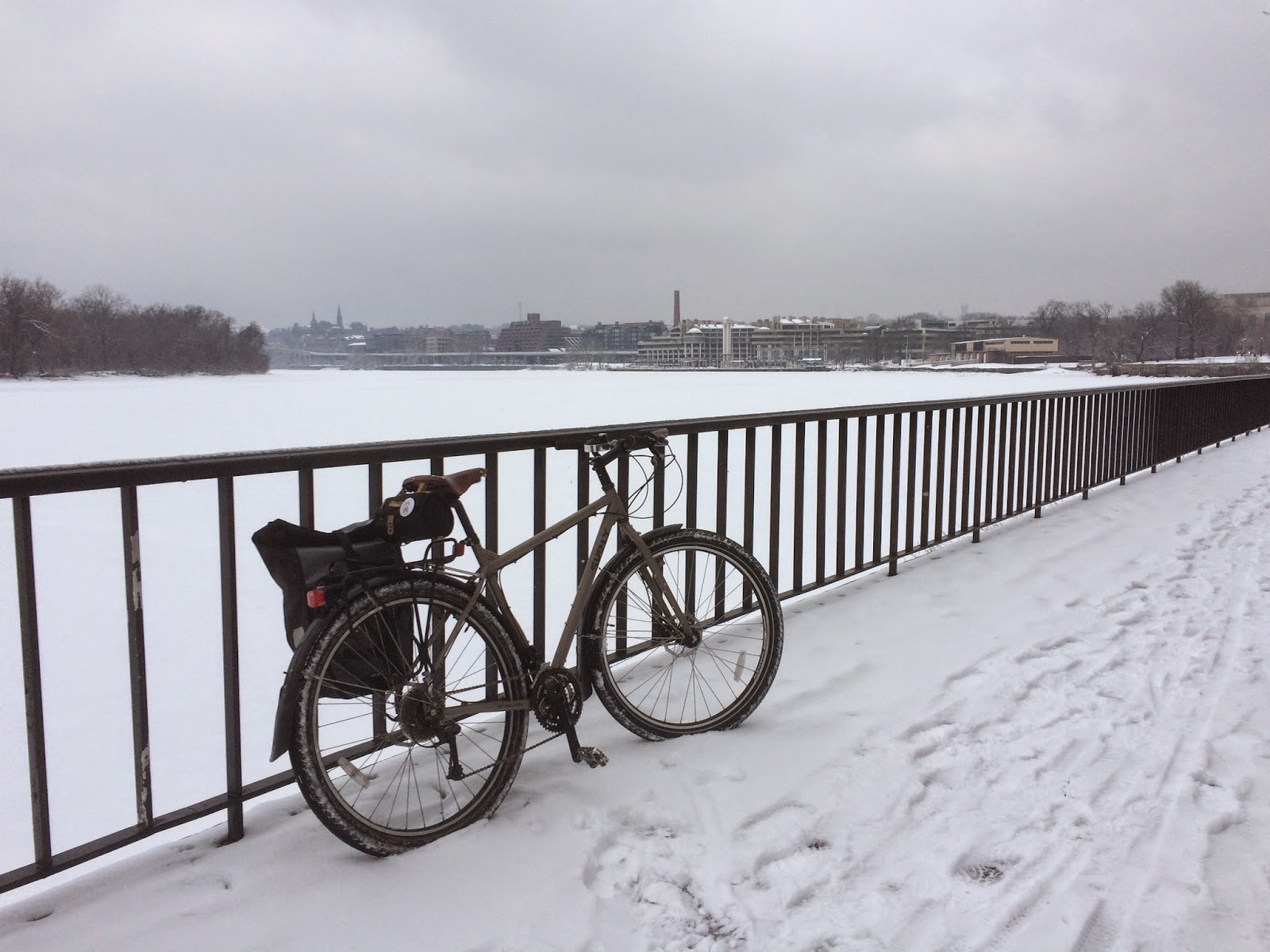 Again, just barely an inch. The inch, however, obscured the patch of ice that wasn't cleared last week. That made for fun. I only slipped once, having spun the back wheel on a patch of ice and then I tumbled towards the railing in the picture, losing balance as the front wheel turned, but I righted myself by holding the rail and didn't fall into the icy river. How very boring of me.

Up Wisco and subjected the various driver impatience. Let's talk, impatient drivers. If it were as easy for me to ride uphill at 35 miles per hour as it is for you to rotate the steering wheel directly in front of you a few degrees allowing you to move over into the otherwise empty left lane, I'd do it. But it's not. So maybe you should try the changing lane thing. I promise it's not that bad. You can even move back once you get around me. I won't even be mad.

The morning snow had the curious effect of melting some of the ice from last week (it must've been hot snow. Weather is truly mysterious) so the bike lanes I encountered on the way home were clearer than they had been all week. Before I could get to these bike lanes, the ones on L and 15th and Pennsylvania in particular, I had to ride down Massachusetts Avenue, where I found myself stuck behind one of the infrequent N buses and in front of another infrequent N bus. Apparently, they decided to be simultaneously infrequent today. Massachusetts Avenue would probably be called an arterial if you're the kind of person who believes in calling roads such silly things and even though there was a left lane into which I could theoretically try to pass the bus, passing the bus was also the priority of many drivers in their many cars being driven at much speed. Here's my generalization about bicycling in a city: the roads shouldn't allow speeds that scare a bicyclist from changing lanes to get around a stopped bus. I think if we followed that general maxim, we'd have much better cities. Also, I wouldn't have gotten stuck behind that bus.

U-turns or plowing has led the first casualties of the parking stops installed on some blocks of the Pennsylvania Avenue. 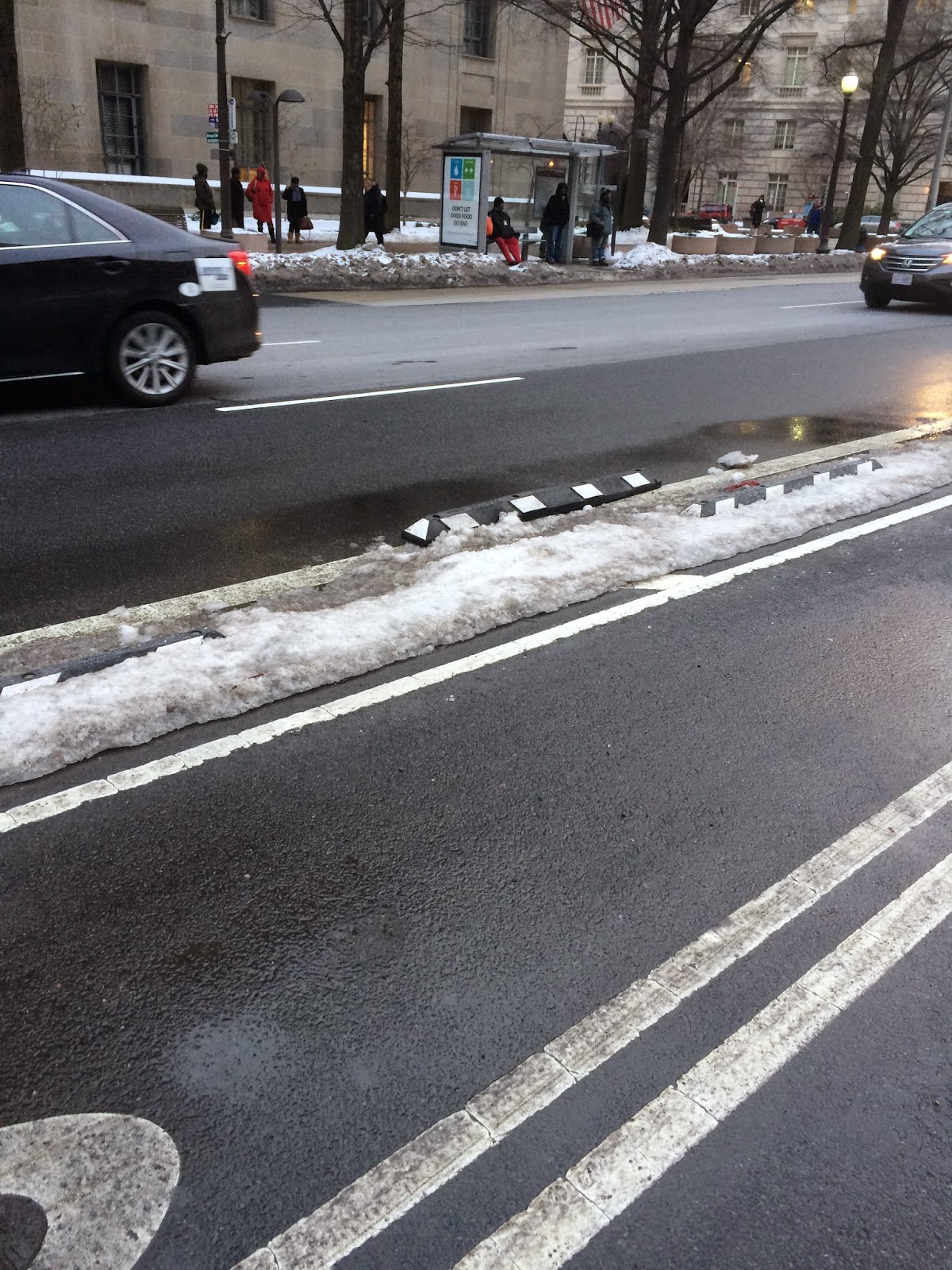 I guess I think a lot about the destructive power of cars mostly because I spend a lot of time around them and it's a bit of a preoccupation. Also, because #waroncars, I guess. But maybe you don't think a lot about them as much as I do (or maybe you think about them more), so consider this: think about how much destruction you see on a daily basis that is caused by cars. How many knocked over signs. How many knocked over posts. How many busted curbs. Like, I don't mean the mundane wear and tear, but stuff that's been crushed, trampled, bashed, or otherwise damaged from sheer power and momentum of a misguided metal object. Pay attention next time you go out. Marvel if you dare not quake.

An aside: when we visited Mostar in Bosnia, we got stuck there because the bus from Sarajevo got there after the bus to Dubrovnik already left and we ended up staying the night, though that wasn't the plan. No one in the bus station spoke English and we didn't have any kind of Slavic except for a few stray words, but one woman who worked there spoke French and so does the Official Wife and she called her parents (I think?) or maybe just some friends and we ended up staying in a private room in a house in the hills above the city and I remember sitting on the porch and looking up at one of the wall on the outside of the house and it was pocked with bullet holes, as were many of the other outer walls on many of the other houses nearby. I was shocked, but I doubt the people who lived in any of those houses thought the bullet holes were especially remarkable as it'd been some years since the war had been over. It's easy to become habituated to the mundanities of mild destruction.