Rides 2/3: I really have to get this done

Below are some notes I jotted down before so let's just elaborate on those.

cold- as in, it was very. I wore two coats. This turned out to be 1/2 coat too many. Should've worn a coat and a vest. Or maybe a coat and just the sleeves from another coat. I ruin more coats that way. Tomorrow should be warm. I will bask in it.

mall- not the shopping kind, but the national kind. Here's some bike racks by the reflecting pool. 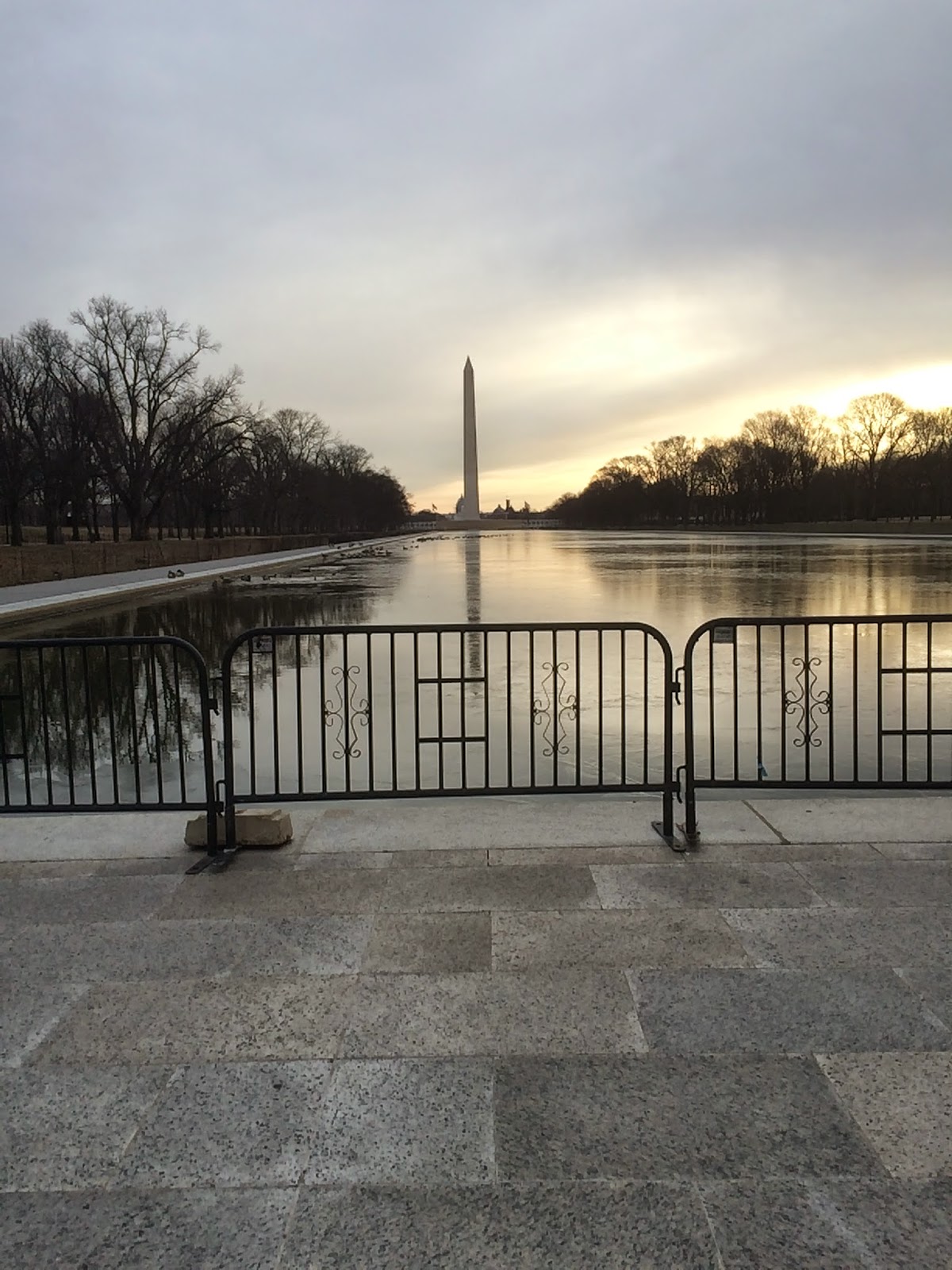 Shortly after taking this picture, my phone turned off from the cold. Later in the day, when my phone was working again, I emailed the Associated Press about their bike rack story. My email was this:

In the story "Man arrested outside White House grounds" from February 1 (as seen here: http://wtop.com/dc/2015/02/man-arrested-climbing-white-house-bike-rack/), the AP reported that "The Secret Service has arrested a man who climbed a bicycle rack outside the White House grounds Sunday, and he’s been charged with unlawful entry."

There are no bike racks outside the White House. Those are fences. While they do bear a resemblance to antiquated comb racks (an inferior form of bicycle parking), they are not meant for the parking of bicycles. I confirmed this with the Secret Service. May you please update your story to reflect this and/or issue a correction?

For more, please see my own reporting on this matter here:http://talesfromthesharrows.blogspot.com/2015/02/rides-22-gusts.html

one bike rack in front of the apple store- They put one in. I'm not sure when, but it's been desperately needed. Bike parking in Georgetown isn't great (though getting better, but slowly) and the addition of a an upsidedown u-rack in front of a popular retail destination is very welcome.

YOU'VE RUINED IT FOR EVERYONE ELSE- is what I want to shout at the driver who passes me too closely, thereby prompting me to move over into the middle of the lane, thereby preventing any other driver from attempting to do the same. Listen, I don't want to slow down drivers 'just because.' That's needlessly spiteful and doesn't really do me any good. So if there's enough room to get by safely, I give approximately zero fucks if a driver passes me safely. But when someone driving a car can't find the decency- a bare minimum decency- to pass me with at least three feet of space, then all bets are off and I'm not going to let anyone else repeat their mistake. It's been said before by a million other bicyclists on the internet- and in real life too, as if that matters- but I'm not going to risk my safety for someone else's marginal convenience. And I don't feel bad about that at all.

sandwiches- were for dinner. I stopped at the Taylor on 19th Street. Having forgot my u-lock this morning, I left my bike on the rack outside unlocked. It was stolen approximately zero times. I watched it the whole time and felt like it was pretty ok and I kind of wonder how long you could leave an unlocked bike outside the Taylor on 19th Street before someone rides away with it.

runners- in bike lanes. running at me. Like they're mocking me. Like it's on purpose. But at least that means they're reading GP! Nah, they're probably just jerks.

follow my own advice?- as in, how often do I ignore the suggestions I weekly give to other people? I plan to go back at some point at do a full assessment, but I'd say I routinely follow my own advice about 80% of the time, which isn't so bad. Consistency, hobgoblins, etc.

passed uphill- on Capitol Hill. Guy was on a road bike, I was going pretty slowly, I didn't really care, but I guess I cared enough about it to remember it.

random u-turns- I've noticed more of them lately. Apparently the thing about car driving is that sometimes you're driving one way and then all of the sudden you're like 'omg, I forgot to unplug the iron' and for fear of your clothes getting over-ironed (fun fact: I don't know a lot about ironing. Maybe that's why my work nickname is Rumples McNeverpressed) you've just gotta whip a huey (how they muster votes in Depression Louisiana?) and get home as quickly as possible and maybe driving legally and making just a couple of legal turns would just cause too much of a delay. This isn't even on Pennsylvania Avenue, America's Main U-Turn Street, but just other streets, sometimes ones that aren't even that wide where a u-turn becomes a multi-part affair with going and stopping and reserving and wheel-turning and honking and going and all that. Anyway, I guess u-turns aren't just a thing that people feel any compunction to avoid doing.