It's taken all winter, but it's finally spring. That's pretty much like every year, I guess.

I decided to ride through the city, following Pennsylvania and 15th Street and M Street and the other cyclists who were doing the same, and I found it to be an oddly relaxing experience, in spite of the fact that circumstances ("circumstances" is what I call things that block the bike lane) were abundant and that very easily could have bothered me, but I tried not to let it bother me because what good is being bothered going to do? Being bothered by little stuff doesn't get you to work any faster and it certainly doesn't make you feel better about anything. Like everything else, it's an expectations game. If you're a driver and you expect to be able to drive your car at 60 mph directly from you house directly to your office and get a free up-close parking spot as soon as you get there, of course, you're going to be disappointed by reality. And if you're a bicyclist who expects that there won't be detritus in the bike lane or an occasional jerk impeding it, that'll probably miff you too. But if the government is going to try to assuage these bothers, which do you think is more achievable? We've tried to build highways and tons of parking and all that and I'm not sure it's actually done very much to alleviate the stresses of car commuting. Maybe some things can't be unbothered.

I rode up 28th Street in Georgetown, which is a lovely old street through a quiet residential fancy townhouse neighborhood and it's exactly the kind of place a bicyclist shouldn't feel like an interloper. It's not an 'arterial' and it's not wide and got parking on both sides and stop signs at every block. It's got a gentle incline from M to R, where the street stops at the cemetery gates. And yet, every time I ride on this street, I feel like I don't belong there because more often that not, some guy in a giant car is inches off my bumper (an honking!), as the street is too narrow to allow for passing me. It's an unpleasant feeling, made more unpleasant by my otherwise completely pleasant surroundings. If a person can't feel comfortable bicycling on a street like this, or, rather, if the expectation on a street like this isn't that it's a nice quiet place for bicyclists who want to avoid main roads and everyone else should get over it, then I don't know what to do. I've commuted by bike long enough to develop a relatively thick outer layer of 'fuck off,' but I don't think this should be a prerequisite or an expectation. I guess it just makes me sad how ingrained the expectation is that cars are the number one most important thing on every street, irrespective of whether it makes sense for that street.

Rode down New Mexico towards home, with a quick stop at the grocery store to buy soybeans and wine. I took 34th street, a residential street in west Georgetown, that has a bike lane and also serves as a pipeline for drivers heading from [I'm not entirely sure. points north?] over the Key Bridge. Car traffic backs up regularly, but the bike lane allows cyclists to get by just fine. I've counted cars stuck in traffic before, but rarely have I ever counted people in them. I counted 53 cars. They held a total of 57 people. That's 57 people spread out over 6 blocks. That's fewer than 10 people a block. Road space is precious, they tell us. How precious could it be if we give a whole block of road over to 10 people?

After the store, it was L to 11th. On 11th, I stopped behind a bus and a car, having no room to squeeze through. A superbiker in full kit then squeezed between me, the car, and the bus. Oh superbikers.

Farther down 11th, I rode behind a very hesitant bike commuter. I think he was new. Hello new bike commuter! Welcome!

"It is difficult to get a man to understand something, when his salary depends upon his not understanding it!"- Upton Sinclair, on taxi drivers and bike lanes

This was a nice sight: 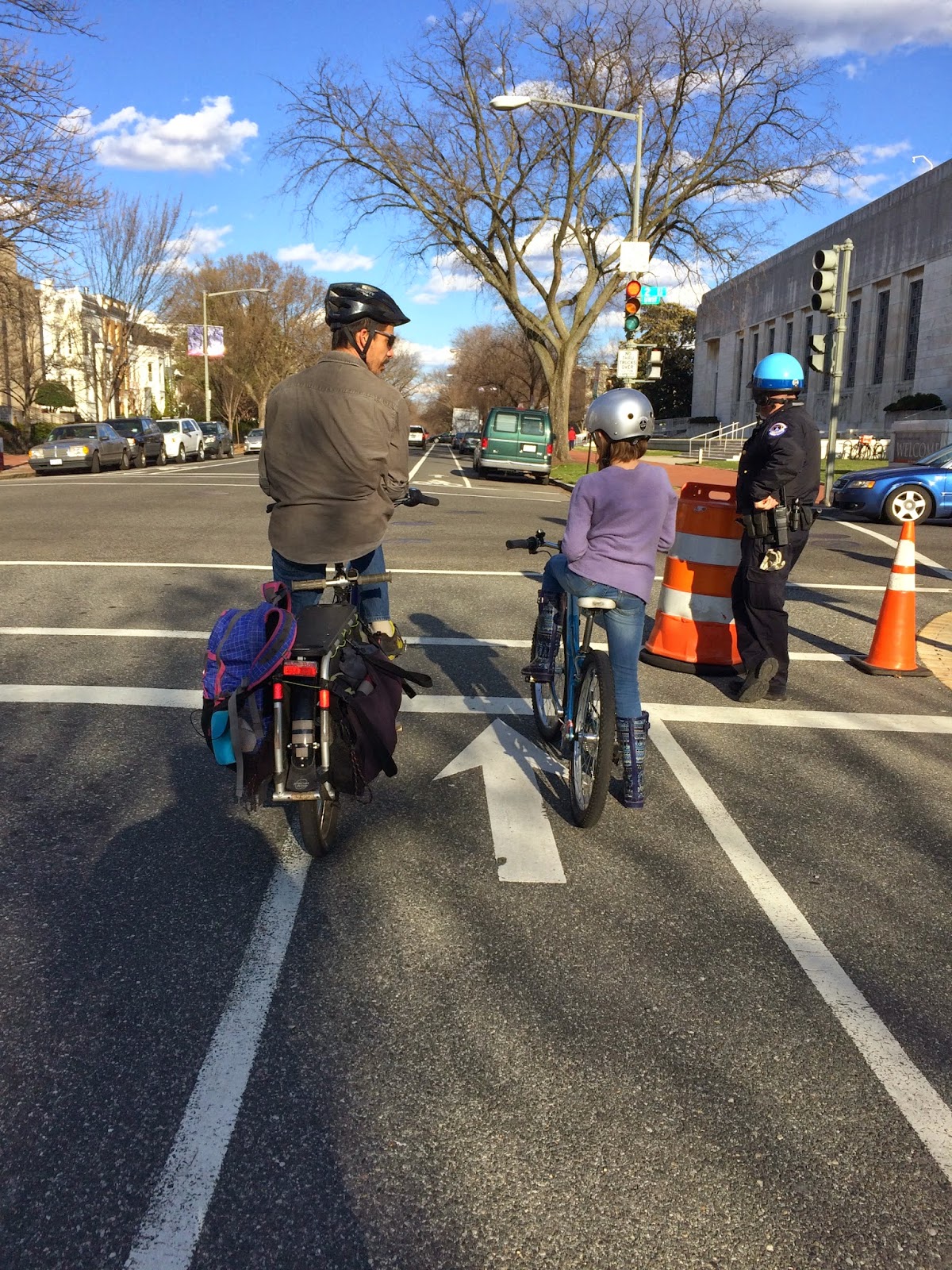