I guess I forgot to write this yesterday. I did, however, watch The Stranger, the Orson Welles noir film about a Nazi hiding in disguise in a small Connecticut town in order to escape prosecution for war crimes. To the best of my recollection, no bicycles were featured in this film.

I'm finding it increasingly difficult to disambiguate one morning commute from the next. "Oh, the gray day? When it was kind of rainy? And the three cups of coffee you had before leaving the house failed to do anything but causes the faintest enough flickering in your brain to get you dressed and on the bike?" Yeah. I guess it's just that time of year. I haven't missed the cold, but at least the cold has a jarring effect that snaps you into a sense of greater clarity. The dull gray haze doesn't.

I don't want to dwell on this last part because it's negative and I don't like to be a negative person. "DON'T BE A NEGATIVE PERSON!" I affirm to myself in the mirror each day, mostly missing the point of daily positive affirmations, but it's not taking and so I'll be negative for a little because there's really no positive way to spin the dismal state of thinking about pedestrians and cyclists in DC by those who have the power to make their lives better or worse and almost always invariably choose worse.

The former HQ of the Washington Post, a local newspaper, are being demolished and since this building sits along the 15th Street Cycletrack, the premier north-south bike route in the city, the construction is causing something of a disruption, but only indirectly to bicyclists. The construction crew has fenced off the sidewalk and very helpfully placed signs telling pedestrians that they should cross the street. Pedestrians are, however, not morons and don't blindly follow stupid signs and instead walk in the cycletrack. I don't blame them for this at all, since it's exactly what I'd do. However, it creates a situation in which pedestrians and cyclists are mingling in the cycletrack and there's not even any attempt by those in charge to recognize that this is a suboptimal organization and that perhaps instead the parking lane could, with the use of space age orange cone technology, be converted into additional space for cyclists so as to mitigate the conflict. Because 1) this makes sense and 2) this is what the law says is supposed to happen. But nope. 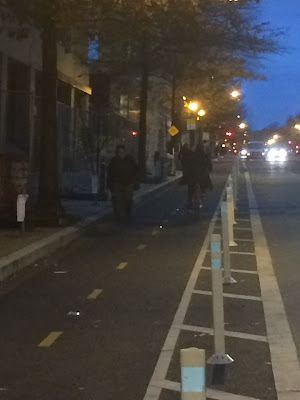 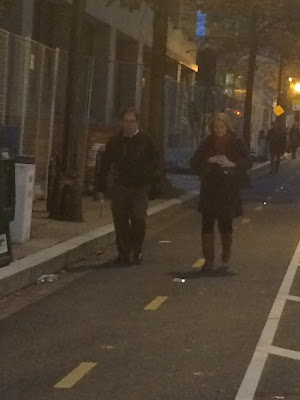 So here are a few unorganized thoughts on this:

1. This was very predictable.

2. That this was predictable is sad.

3. Inviting pedestrians to walk in the cycletrack shows little regard for people on foot or on bicycle.

4. Worse yet, not even considering WHAT MIGHT HAPPEN is a result of closing the sidewalk demonstrates a lack of imagination so stunning that it borders on incompetence.

5. Worse yet, knowing full well exactly what would happen and proceeding with it anyway, demonstrates apathy bordering on contempt.

6. Dignity. People have dignity. And this doesn't go away when they don't travel by car. The dignity belongs to the person and not the car. And yet, here we are. This is not how you treat people you respect.

7. It's hard to see how this arrangement is compatible with a Vision Zero regime.

8. This is the middle of downtown, a highly foot trafficked area. This is the premier cycling route in DC. That this closure might cause a problem shouldn't have snuck up on anyone.

10. That no one will die doesn't mean this is a good arrangement.

11. I don't know what we're supposed to do to unwind the culture that enables this. There's already a law that says don't do this. Culture > law. Laws are easy to change. Culture not so much.

12. Most people won't think that this is a big deal. Construction has to happen, sidewalks need to close. People are sometimes inconvenienced. Life goes on. So bikes and pedestrians have to share, so what?

Today I didn't go to work, but I did bike and walk around a little. Biked down to SW and then walked around and eventually up L'Enfant Plaza and across the Mall and then I took the Circulator back to Union Station (I have thoughts on this too, but I'll spare you- for now) and then biked home from Union Station. As someone who really loves to walk (more than biking, even), Bikeshare really enables me some excellent walking trips with quick bike rides at the start and end of each walking jaunt. Thanks Bikeshare.